Across the weekend, we selected 10 companies (from the submissions we received) to participate in the first Australian BizSpark Camp. We decided to focus this first event around Azure technologies, so asked the teams to submit how they thought they might use Azure for their solution. The event kicked off bright & early Saturday morning with Chris Auld running a 3 hour intensive session around Azure. According to attendee Francesco from team White Flame, “Chris was excellent and had some very helpful insights”.

After lunch Jordan Knight ran break out sessions on Setting up your Azure account, connecting to it from Visual Studio and then interacting with SQL Azure.

Steve Nagy, Nick Randolph & Nick Hodge were also on hand to work with partners to decide on best practices, solution architecture and to help them hit the ground running with their application development.

Both Steve & Jordan stayed on site for the rest of the weekend ensuring they answered all the teams questions & gave them some great tips! “The training was great. The onsite helpers were great. ” says Mark Burch. The office became eerily quiet as the teams each staked out their place to work & started madly coding away.

Although we had to leave the building at 10pm on Saturday night, many of the teams worked through the night to ensure they had something awesome to show us on Sunday!

By Sunday morning, 3 of our teams had opted out of the chance to present their solution to the judges, leaving us with 7 teams remaining… and each of them was back in the office nice and early.

Sunday we decided on a boxed lunch so that the teams could listen in to tips & tricks from featured Judge, Joe Najem from AC&E International. Joe stayed around for the rest of the afternoon to answer questions & help the remaining teams understand what the Investors would look for in a company pitch.

We had the final STOP development cut off at 4:00, and at 4:30pm on Sunday, 7 teams presented to the judges for the chance to win: $5,000 cash thanks to the Australian Developer, Platform and Evangelism Team. Patrick Driessen of Seed Accelerator donated for the winner & runner up teams a Globalisation Strategy Workshop with the Seed Accelerator team in Sydney. The workshop runs for 4-5 hours and will enable the teams to define and optimise their business model, with a main focus on optimising their (global) growth strategy, (global) delivery model, and exit strategy. A great workshop for each of the teams to have the opportunity to attend. Oh & of course, there were some lovely trophies available as well!

At 4:30, each of the teams had the opportunity to pitch their ideas to the Panel of Judges (in order of appearance): 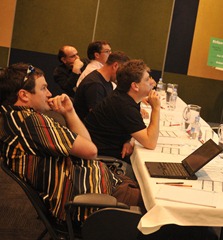 The teams ranged from single person teams, to teams of 3. Each team had the opportunity to pitch their solution for 5 minutes & then answer questions from the judges:

The 7 Teams that presented (in order they presented) were:

White Flame with Aussiemen.com.au – Men seeking men dating website. During his presentation, Francesco was able to show that with some very clever architecting and using Azure, he would reduce his running costs by 42%!

IN4MA (www.in4ma.com) with EARCHWARE an Enterprise Architecture Repository that had a Silverlight front end that connected to different roles allowing Enterprise Teams to easily store & view artefacts. The solution used Azure to Store indexes and SQL Azure for tracking the relationships between items. An initial Prototype was built across the weekend and demoed to the judges.

FreedomBase www.FreedomBase.com is a patented technology that uses aspects of artificial intelligence to manage relationships between data in the same or any number of disparate databases, without requiring any coding. The guys showed how they could extend their offering by expanding to the cloud.

Aimee Marie Forsstrom & Erle Pereira decided not to build their initial idea they had submitted, but used the weekend to learn about Azure, speak to venture capitalists & start to nut out another business idea. In their presentation, they got feedback from the judges on some high level ideas they had around using the cloud & some of the latest Microsoft technologies to audit & provide governance to large corporate blog sites.

Ignite Intelligence (www.igniteintelligence.com) are already working on a solution for councils to help them help their constituents reduce their global footprint. The team spent the weekend looking at the value of porting their solution to the Azure framework and presented on how using Azure would also decreased their running costs as well as cost of development.

Mark Burch with EyeKnowIt www.EyeKnowIt.com – a Web 2.0 user generated image/object identification system with a social networking overlay. Azure was used for Image storage, Image indexing and tagging. Mark & Ben managed to get a version 1 of their site up & running from scratch across the weekend.

Nick Holmes a Court headed up the team from BuzzNumbers www.buzznumbers.com.au who all spent the weekend sleeping very little as they built their https://blogosaur.us/ solution. The team decided to implement a solution that uses Lucene then stores the results in Blob storage in Azure. BuzzNumbers were able to successfully secure their first client with this solution & anticipate many more.

After hearing each of the presentations, the Judges went off to intensely discuss (some might call it arguing!) who would be the winner. 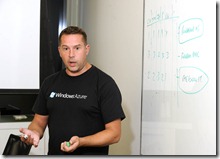 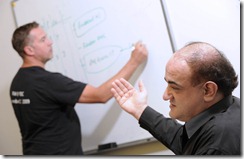 Meanwhile, Bart Jellema entertained the attendees, sharing tales from his trip to the US for SxSW, and the Startup Bus antics on the way.

Ultimately there could only be one winner and so Chris Auld announced the top 3 teams:

Across the weekend – in between helping everyone, Jordan Knight set up another one of his great Deep Zoom Eventr Sites to poll for Flickr Images created & tagged for the event over the weekend and the result can be seen here: https://jak.cloudapp.net/Default.aspx?guid=d72e84f0-8aa6-45ec-97f3-cd1afd90f627

A big congratulations again to all the teams!

It was great to see the varying ways that teams approached learning the new technology & then implementing it in such a short time frame. I am even more excited that most of the teams will continue to use Azure in their ongoing development. I was impressed with the questions and interaction that teams had with our guest judges and I am looking forward to hearing about the results of follow up meetings that have been planned!

As Nick Holmes a Court of Buzz Numbers shared with me: “It was an amazing experience and it was great to learn so much and meet such smart people.”

I am so glad everyone enjoyed it and I look forward to our next one being bigger & better again!!! :)