How to create a “black box” performance counter data collector

I highly encourage my customers to run a “black box” performance counter data collector set on their Windows Servers. The purpose of it is to continuously collect a detailed amount of data about the system in a circular file buffer of adjustable size so what if/when the system has a performance problem, we have roughly 24 hours of data leading up to the problem.

Arguably the easiest way to do this is to install the Performance Analysis of Logs (PAL) tool – an open source project/tool of mine. It requires Powershell 2.0 and the Microsoft Chart Controls for the .NET Framework 3.5 – both are free products from Microsoft. Once installed, run the PAL Wizard from the Windows Start menu and navigate directly to the Threshold File tab. Select a threshold file or combination of threshold files (they can be mixed and matched through the inheritance pane, and click the Export to Perfmon template file button. 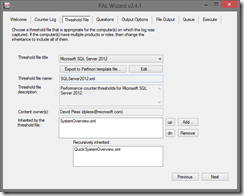 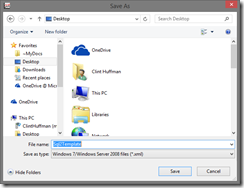 In this case, I specified “SQL2” and saved it as an XML file which is the format that Windows Server 2008 and later uses for counter log templates. Once the XML file is saved. Optionally, open it in Notepad to verify that it has the counters that you expect to see. 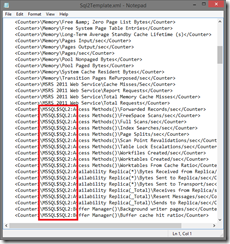 This template is a good start, but will require additional modifications to make it a circular log.

Run the following command to create a data collector using the template:

Here is an example of me creating the data collector set named, “SQL2_Blackbox_darksteel” (the %computername% resolves to the local computer name using the template I created earlier, “Sql2Template.xml”, on a remote system called, “darksteel”.

Run the following command to check if the data collector set was created:

Note that the data collector set has not been started yet. Do not start it just yet.

Update the data collector set to be in binary circular format with a log file maximum size of 300 MB or a size that you prefer.

Now, the data collector set can be started and left to run forever without ever being larger than the size specified.

This file path is in respect to the file system on the target system – not the workstation from which the command might be running.

Important: Ensure that the output directory location does not already contain data. Performance Monitor’s Data Management features might delete data at that location.

To start the data collector, run the following command:

Run the following command in order to have the data collector set automatically start after a reboot:

Note: The /S parameter of schtasks can be used to create this task on a target, remote, system.

Now the data collector set will automatically be started when the system starts.

By default, data collector sets will create a unique counter log each time it is started. This is to prevent the deletion of the existing logs. This is a nice feature, but this can result in several log files that might just be taking up too much disk space. 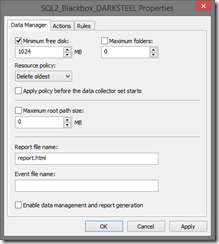 In this case, I setup the data collector set to delete the oldest counter log file.

Want more? These procedures and *much* more is covered in my book, “The Windows Performance Analysis Field Guide” due out in August 2014.