More and more information is becoming available every day on the new MSDN and Visual Studio 2010.

For starters, the entire MSDN site has gotten an entirely new look. It has three different views: Classic, Lightweight Beta, and ScriptFree. You can switch between the different views by either select the Switch View option at the bottom of the screen or along the upper right-hand side. 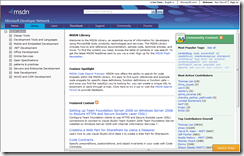 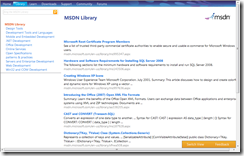 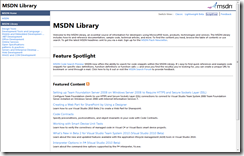 The site redesign is just the beginning. On October 19th, we announced the availability of Visual Studio 2010 Beta 2, we also outlined the Ultimate Offer that will take effect on the VS 2010 Launch Date of March 22, 2010. This offer makes sure that every MSDN subscriber gets equal or greater value (in many cases, a lot greater) as we transition subscriptions into the new and simplified VS 2010 product line.

Here’s how subscription levels will transition :

If you noticed, TFS 2010 and the TFS CAL are included with Visual Studio editions that includes MSDN (with the exception of MSDN Embedded). TFS 2010 can be installed multiple ways: Basic, Standard, and Advanced.

Basic Edition is a way to replace your Visual SourceSafe source code repositories. Rather than using a file system and database to maintain deltas of your source code, it will use SQL Server 2008 Express. It’s more than just source code control, it also provides Work Item Support and Automated Build Engine. This also means that you can install and run Basic on a workstation as well as a server.

Standard Edition is just like before where you’d install it running it with SQL Server 2008 Standard or Enterprise Edition onto a single server.

Advanced edition is more like installing TFS onto a dual platform environment.

Unlike previous versions of TFS, the installation experience has been greatly improved as well. After you install the bits, you’re prompted to launch the configuration wizard. That’s right, a configuration wizard. When I installed and configured TFS 2010 Basic on a Win7 workstation, I was able to install configure it within about 20 minutes. That includes getting IIS and SQL Server Express configured. When I installed TFS 2010 Standard Edition on a Windows Server 2008 R2 box, The configuration tool slightly longer…45 minutes. That includes answer the questions, letting it configure IIS, create the SQL databases, and installing/configuring WSS 3.0. Also, Team System Web Access is now included as part of the installation process. No separate download/install here.

Another feature of the MSDN subscription you get with VS 2010 is access to Windows® Azure. In case you’re not aware, Windows Azure is Microsoft’s new cloud computing platform. If you want to see it now, you can sign up for a Windows Azure CTP account today. When Windows Azure becomes commercially available, MSDN Premium subscribers will get a lot of free services as part of the subscription. Click here for more details.

As more information becomes available and as I discover how the new features in VS 2010 work, I continue to post about them.