In order to use Hyper-V on windows 8, you need a 64- bit system that has Second Level Address Translation (SLAT). SLAT is a feature present on many of the current generation of 64-bit processors by Intel and AMD. To determine if your processor supports SLAT, you should download the Windows Sysinternals tool called CoreInfo. Once you download and extract the EXE from the ZIP file, you’ll need to run it from a Command Prompt that was select to Run As Administrator. If you’re running Windows 8, the easiest way to do that is by searching the form the Command Prompt using Search, right mouse click on the program and click on Run As Administrator from the application specific menu along the bottom of the screen. You’re not just going to execute the CoreInfo.exe, you’ll need to use the –v switch as seen in the screenshot. If you’re process supports SLAT, you will see a “-“ (minus sign) next to the EPT field. This confused me at first because I would have thought the “*” (asterisk) would have meant the feature was enabled. When I got my most recent computer, the specs said it supported SLAT and it does, but when it shipped, that feature was disabled in the BIOS, so if you think your system supports SLAT and EPT is showing an asterisk, you should check your BIOS.

You’ll also need to use the 64-bit version of Windows 8 and a lot of memory. If you’re machine only has 4 GB of RAM, you meet the minimum requirements, but it’s not going to be really useful. You should have at least 8 GB of RAM because you have to share the RAM with the VMs you’re running. 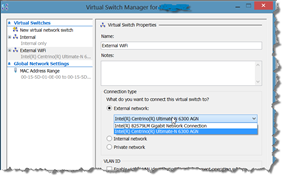 One of the problems I always had with running VMs on a laptop is connecting them to the machine’s WiFi. One option was to use Internet Connection Sharing as outlined in Ben Armstrong’s blog or you can use Remote Access Service (RRAS) as outlined in John Paul Cook’s blog. Both work but both have their disadvantages. By using Windows 8, you’ll be happy to know that Hyper-V supports WiFI out-of-the-box. Huzzah! So setting up your VMs to your WiFi is as easy as going to your Virtual Switch Manager and creating a switch that uses the WiFi NIC rather than the wired NIC.

On the Windows 8 Blog, there’s really good article about the decision bringing Hyper-V to Windows 8. Definitely a good read but even better is the following video that provides a quick walk-through of how Hyper-V works in Windows 8 from the article.