Popfly Game Creator Alpha launches today and It's amazing. Kudos to Adam Nathan as he's really shown how Silverlight can build incredibly rich applications. I can only imagine what he'll do when Popfly moves to Silverlight 2!

While Popfly Game Creator is designed for non-developers, I'm sure many developers will also want to have fun with it, so here's my quick explanation of Popfly for .NET developers.

Scenes == A Windows Forms/ASP.NET Page Designer: Scenes are the equivalent to a Window or ASP.NET page. You can have multiple scenes in an application, you'll get a start, main, and end scene to begin with, and you can of course switch to a certain scene based on something happening in the game (ex: taking a transporter, dying, etc). In a specific scene, you will go go in and add your actors to the scene in a visual layout.

Actors == Form/Page Controls: Actors are any object you place in a scene. Here's a screenshot and notice that everything, including the background is an actor. 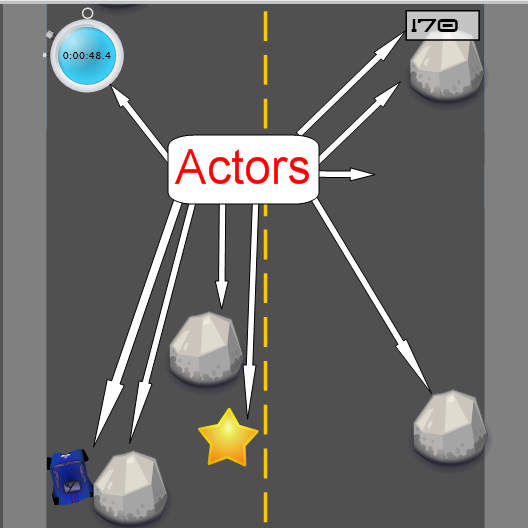 Game == Files/Properties: This is where you can add properties like a game score, or add custom files like pictures of friends.

If you want an actor (control) to move around, play a sound, shoot, appear, disappear, etc, this list of behaviors is what you'll want to click and specify

Here, for example, are a set of behaviors for a car that add steering, adding to the high score and disappearing when the game is over 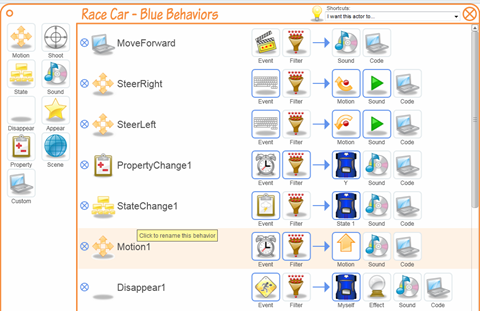 Shortcuts == IntelliSense Code Snippets: One of the convenience things that the Popfly team did was add shortcuts which are a pre-built set of behaviors. What this means is that rather than having to manually add behaviors for moving up/down/left/right using arrow keys, you can just select that shortcut and it will automagically add those behaviors to the selected actor. 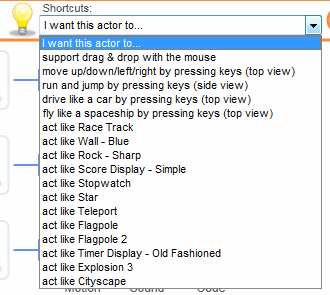 And of course, as developers, you simply need to look for the Code icon to drop into custom XAML and JavaScript, but one can only imagine how nice it'll be when they add VB/C# support in Silverlight 2.