What's important to realize is that Connectors aka APIs in Logic App are (almost always) wrappers for services existing in the backend. There are some exception for Connectors like B2B or built-in actions like Flat-File where the connector is the service itself and does not relay requests to a back end service. Yet for Logic App Custom Connectors, they are always wrappers. So you will have a REST front-end (as Logic App always talks REST) for which we use OpenAPI / Swagger, meaning operations and the like - see https://swagger.io/specification/ if these are not familiar. The back-end will be which ever protocol the back-end service talks, which may be REST again (as for REST custom connectors) or not REST (as for SOAP custom connectors). In theory future custom connectors may be extended to other protocols beyond REST and SOAP, although those two represent the dominant current and dominant past protocol.

The configuration user interface for custom connectors presents three tabs of General, Security and Definition. What configuration you input will drive what Logic App creates in the backing API management instance.

The General tab is where you will find the specification of the back end service. See https://blogs.msdn.microsoft.com/david_burgs_blog/2018/06/14/custom-url-path-for-pass-through-soap-connector-for-azure-logic-app/ for an example of customizing the back-end request URL from this General tab. 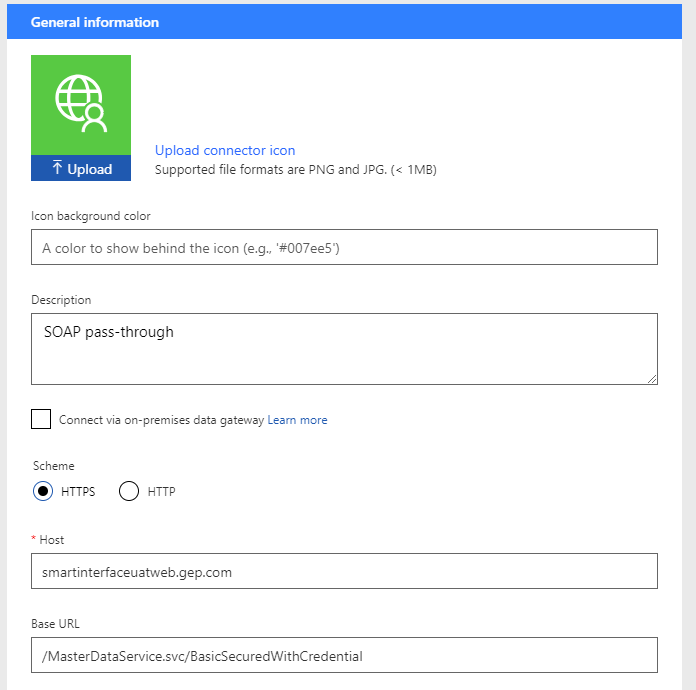 Security tab is self-evident. You can do basic auth there. Do note that there is not at the moment built-in support for SOAP security in SOAP envelop but you can made due with pass-through crafting your own security SOAP payload.

The Definition tab is where you will find the REST front-end presented to Logic App.

As this is the front-end it is important to realize for SOAP that changes to the Operation path will not translate to changes to the back-end URL request (or more precisely it will mess up the URL rewrite policy in the backing API Management and lead to failures). To alter the back-end URL request you need to change properties on the General tab.
For SOAP pass-through, there will be only a single operation - pass-through -. This is by design and you shouldn't change it. This pass-through operation is the sole front end API what Logic App will be calling.