In August last year, I proudly announced that my eldest son, Aaron and some of his friends from All Saints College were Robocup Junior WA 2010 Rescue Premier State Champions.

Well a year later, on 27th August, after a nail biting final round, Aaron's new robot (called Jimmy) was able to win the 2011 state competition for Western Australia.

The robot needs to be able to follow a black line on a series of square mats/tiles (see photo background below) which can be laid out in any order. The line can be straight or have turns. There are also green squares at intersections which the robot needs to detect so it make a right angle turn to follow that "short cut". The robot needs to be able to navigate around obstacles on the black line and go over a ramp and speed bumps. Finally, when it reaches the rescue area (see the green mat in the photo), it has to locate and pick up the "person" (soft drink can with 100g of rice in it) to be rescued. Then it has to locate a platform and place the can down on the platform.

Points are awarded for each of the mats or tiles completed and lots of points for lifting the can and placing it down in the correct location. While you are not limited to Lego, most of the robots are built from Lego Mindstorms kits. They do have a maximum size limit, so it is important to keep it as small as possible.

Below is a photo of Hayden and Aaron with Jimmy after winning the competition for the Rescue Premier division. They won because their robot was the only one to successfully locate and lift the can. 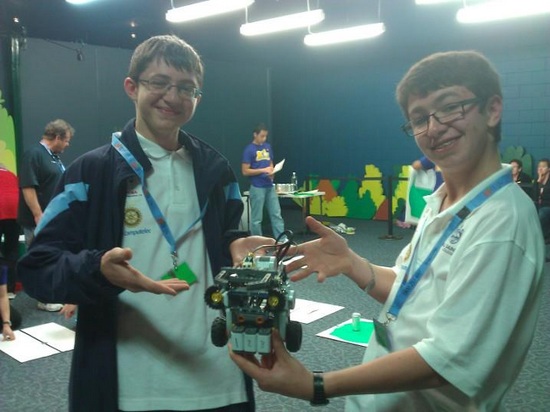 Since winning the state competition, Jimmy has gone through many changes in both hardware and software.  The claw design has changed as well as the sensor used to follow the black line. The result is a smaller, faster and more adaptable robot that should hopefully see Team Jimmy doing very well in the nationals.

So today, Aaron and I are part of a group of seven people (3 students, 3 parents, and a teacher) from All Saints College off to compete in the RoboCup Junior 2011 National Competition in Hobart, Tasmania, Australia in the Rescue Premier and Secondary Dance divisions.

I will let you know how Jimmy goes.