Rob Weir posted on his blog a couple of days ago an Update on ODF Spreadsheet Interoperability.  I think it’s great that he has brought up spreadsheet interoperability, and specifically the issue of formulas, which seems to be the main thrust of his post.  I mentioned on the day of our SP2 release last week that “I’ll be doing some blog posts that get down into more of the technical details, to help explain some of the engineering decisions that we made in our implementation,” and Rob’s post is a good starting point for that conversation.

For those who only want to read the first two paragraphs of this very long post, here’s a summary:

Before I get into the details, I think it’s worth noting that there’s nothing new here.  The challenges of ODF’s lack of formula specification have been around for a long time, and many people saw the current situation coming.

Nearly three years ago, Stephen McGibbon had a good post covering the situation, which is worthwhile reading for some background on how we got to where we are today.  As you can see from the quotes in Stephen’s blog post, many people in the ODF community – and the broader standards community – were dismayed at the decision to not include formula syntax in ODF.  Others outside of Microsoft also pointed out the problem years ago.  Rob’s blog post, as well as this post, are excellent examples of the sorts of interoperability challenges that those people saw coming as a result of the decision to not include formula syntax in the ODF standard.

The first thing I did upon reading Rob’s post was to try to follow his steps for myself, so that I could understand the context of his findings.  Here’s the methodology he describes in his post:

The test scenario I used was a simple wedding planner for a fictional user, Maya, who is getting married on August 15th. She wants to track how many days are left until her wedding, as well as track a simple ledger of wedding-related expenses. Nothing complicated here. I created this spreadsheet from scratch in each of the editors, by performing the following steps:

Sounds simple enough.  So I fired up Open Office 3.0.1, and followed those steps.  The resulting spreadsheet looked like this: 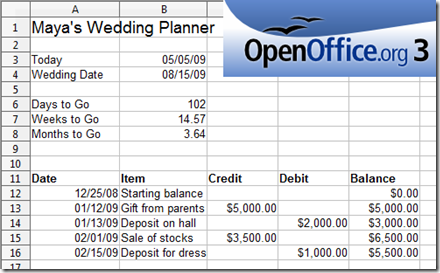 Then I saved the document, by clicking File/Save and then typing in a filename:

So far so good.  Next step, I tried opening the document in IBM Lotus Symphony version 1.2.0.  Here’s what I saw: 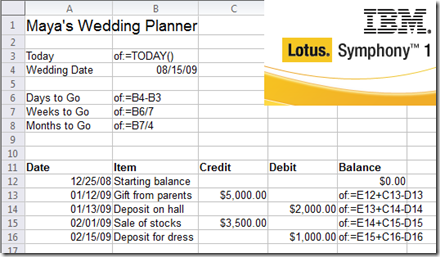 And then I opened the same document in Excel 2007 SP2, and here’s what I saw: 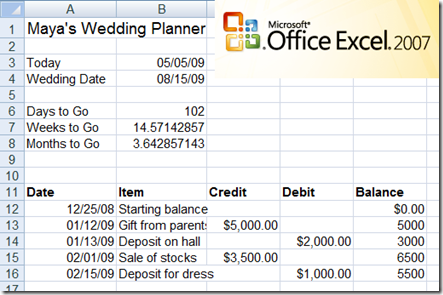 This is a great example of a common ODF spreadsheet interoperability challenge, and two different ways of dealing with it.  The challenge is caused by the fact that Open Office writes formulas in a syntax that is unknown to Symphony and Excel.  Open Office, for reasons I don’t understand, has decided to use as their default formula syntax the unfinished Open Formula specification, which is neither approved nor published by OASIS – not even out for public review yet.

So what do Symphony and Excel do about this challenge?  The answer is that Symphony preserves the (unrecognized)  formula markup, and Excel preserves the cached values.  (A quick aside for those who don’t know: spreadsheets typically store both the formula and the value resulting from the most recent recalculation.)

Getting back to Rob’s initial premise of this being a typical wedding-planning exercise, if Maya were to send this spreadsheet to a person using Microsoft Excel SP2, that person would see the values as shown above.  They’d know at a glance what day was ‘today’ when Maya made the file, and that the ledger balance that day was 5500.

But if Maya were to send this spreadsheet to a person running IBM Lotus Symphony, they’d see only the formulas.  Perhaps an ODF markup expert like Rob would be able to massage that spreadsheet into something usable, but most people would find it a bit hard to conceive of what it means for a wedding to be “of:=B4-B3” days away, or for there to be a ledger balance of “of:=E15+C16-D16” dollars.

After further investigation, though, I think I see what Rob may have actually done to get the result in his table.  He seems to have included some steps that aren’t documented in his blog post:

Here’s how it looks, for those who don’t have Open Office handy:

After following these steps, Rob was then able to create a spreadsheet that stores formulas in the undocumented non-standardized syntax that was used by old versions of Open Office.  Symphony, being simply a fork of an older version of the Open Office code base, is able to understand those formulas, so it can load both the values and the formulas themselves.

It’s worth noting what the OpenOffice.org developers have to say about this option that Rob has apparently used for his interoperability testing:

And what does Excel 2007 SP2 do with the document saved in this alternative format?  Exactly the same thing it does with Open Office’s current default format: it displays the data, so that the document user can see the results of the last recalculation of the spreadsheet, and it ignores the formulas that are written in a non-standardized syntax that Excel doesn’t support.  I think that’s a pretty reasonable approach, when a spreadsheet application comes across non-standardized formula syntax: show the last recalculated result, thus preserving the data, and don’t try to guess at the semantics of undocumented formula markup.

That’s a logical question to ask, in regard to how SP2 handles formulas.  To answer it accurately and completely, we should distinguish between the two formula syntaxes that Open Office uses.

The first is the syntax they use in their non-recommended “1.0/1.1 (OpenOffice.org 2.x)” setting.  This is an undocumented, deprecated syntax, and therefore not a reliable mechanism for formula interoperability.  Despite what you may read on some blogs, it is not the same syntax as used by Excel 97/2000/2003.  Open Office copied quite a bit of the feature set from Excel, and there are definitely similarities in the formula syntax, but there are also differences with regard to referencing, operators, data types, and function arguments.

The other formula syntax that Open Office supports is the Open Formula syntax, which will eventually appear in ODF 1.2.  This syntax has not yet been approved by a standards body, nor has it undergone the 60-day public review period that OASIS requires prior to approval and publication.  It may go to public review soon, but it won’t be a standard until later this year at the soonest, and the details may change as a result of the remaining TC work and the public review process.  (According to recent discussions in the ODF TC, we may send the other parts of ODF 1.2 out for public review first, to allow more time to finish up Open Formula.)

In Office’s implementation, we haven’t chosen to support the draft Open Formula spec (as Open Office currently does), because we have certain obligations when we ship software that don’t apply to open-source projects like Open Office.  We need to test and verify behavior to a degree that’s not possible without final, fixed documentation that is believed to be 100% complete and accurate.  When Open Formula is completed, standardized, and published, we'll be looking at that as the future path for enabling formula interoperability in ODF spreadsheets.  But we’re not there yet; ODF 1.2 is not done, and not even ready for public review.

It’s interesting to note that we have discussed this very issue at a DII workshop.  Last July, we had a workshop in Redmond, with attendees including other ODF implementers, members of the ODF TC, standards professionals, and others.  In the roundtable discussions, I brought up our approach to formula support as outlined above, and asked for feedback.  Although it was not 100% unanimous, there was clear consensus among most of the participants in the discussion that they did not want us to implement a non-standard formula syntax in anticipation of it becoming a standard.  “Putting the cart before the horse” in that manner was seen by many as a possible source of future interoperability problems, rather than a solution to them, and we took that feedback into consideration.

This attribute is supported in core Excel 2007.

1. When saving the table:formula attribute, Excel 2007 precedes its formula syntax with the "msoxl" namespace.

3. When loading the table:formula attribute, if the namespace is missing or unknown, the table:formula attribute is not loaded, and the value “office:value” is used instead. If the result of the formula is an error, Excel 2007 loads the <text:p> element and maps the element to an Error data type. Error data types that Excel 2007 does not support are mapped to #VALUE!

And, as both Rob’s tests and mine show, that is exactly what Excel does.  It would be great if there were a place implementers could go to see these sorts of details for all major ODF implementations.

I’m glad to see this sort of public scrutiny of the details of ODF interoperability and how the underlying challenges are handled by various implementations.  As you can see, spreadsheet interoperability is a complicated topic, and in the specific case of ODF spreadsheets, there is even more complexity created by the lack of a defined formula syntax in any published version of ODF.

The good news, when it comes to formulas, is that the Open Formula specification will address this area soon.  My colleague Eric Patterson represents the Excel team in the Open Formula SC, and the very capable David Wheeler leads that group.  Much good work has been done already, and we look forward to seeing the final Open Formula spec go out for public review and then approval by OASIS.  The nearly 400 pages of formula syntax documentation in ISO/IEC  29500 (Part 1, section 18.17) enables reliable formula interoperability in the Open XML community, and soon the ODF community will have a similar level of formula interoperability.

But formulas are not the only ODF interoperability challenge.  As members of the ODF TC and also the OIC (ODF Interoperability and Conformance) TC, both Rob and I – and many others – will need to work together to enable better interoperability in areas including tracked changes, mail merge, application settings, and others.  Will ODF 1.2 be the most interoperable version of ODF yet?  I hope so, and there are signs that it will be.  But our work is not nearly done.