The SC34 plenary and working-group meetings took place in Stockholm last week, hosted by Swedish Standards Institute (SIS).  Alex Brown has posted already a summary of some of the meetings that I didn’t participate in, and I’ll cover the here the activities and outcomes of the meetings I attended.

The bulk of WG4’s time was devoted to processing defect reports. Going into the meeting, we had 133 defect reports outstanding, including 82 technical, 11 editorial, and 40 requests for information.  During the meetings last week we processed 61 of these.  That leaves 72 outstanding, and WG4 will continue work on those via the teleconferences that will resume on April 8. 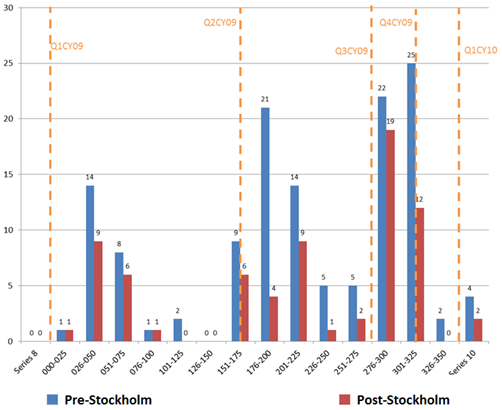 WG6’s work was mostly focused on the errata for ODF 1.0 and the creation of an amendment to ISO/IEC 26300 in response to OASIS’s submission of ODF 1.1 to JTC1.  There was a full room for the meeting, with over 30 attendees including several participating by telephone.

As Alex mentioned on his blog post, Dennis Hamilton provided a great deal of support via his phone participation on the messy issues of text production.  One nice touch was that Dennis had made available a marked-up copy of ODF 1.0 that showed the errata items inline, to make it easier for WG6 members to review those changes in their proper context.

The plenary meeting itself was fast-paced and businesslike, with the main order of business being the approval of various resolutions (as listed here).  Resolutions 10, 11 and 12 may be of particular interest to readers of this blog:

Finally, Ken Holman, the former SC34 Secretary and longtime SC34 participant from Canada, announced his retirement from standards work, and he will be replaced by Paul Cotton as chair of the Canadian SC34 mirror.  Ken said that he plans to crash future SC34 parties, though, so we’ll still be seeing him from time to time.

It was a busy week, but we got a lot done to move things forward in both Open XML and ODF maintenance.  Next stop for the SC34 meetings will be Helsinki in June.