Here’s what I want to see:

Hint: In the meantime there are several great posts and tutorials which do something similar in different ways – all focusing on slightly different aspects. I don’t say my way is better – I’m just showing another option.

1. Use Github as source control system.

2. On Check-In to master branch trigger a build definition in VSTS.

4. Trigger a release to a Docker Swarm Cluster hosted on Azure Container Service

6. Allow a manual intervention to “sign off” the quality of the release

7. Tag the images on “stable” in my private Azure Container Registry

As a demo application I’m using an app consisting of 3 services in total where service-a calls service-b. Service-a also is the web frontend. The demoapplication can be found here. To use it just clone the github repo from me so you have all the additional files in it. However all the credits for the application go to the author of the orginal sample.

Things to point out 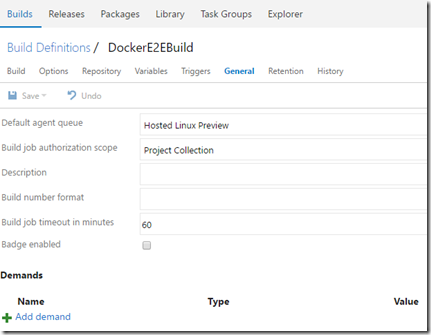 As repository type choose GitHub. You have to setup a service connection to do this as described here. 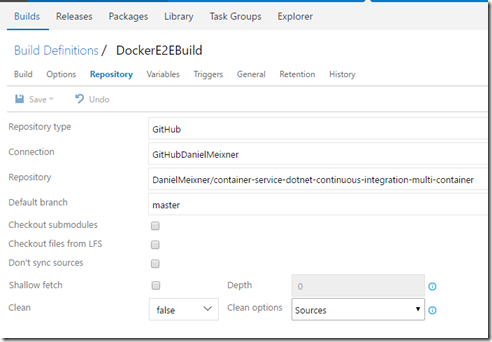 2. Set up continuous integration by setting the triggers correctly 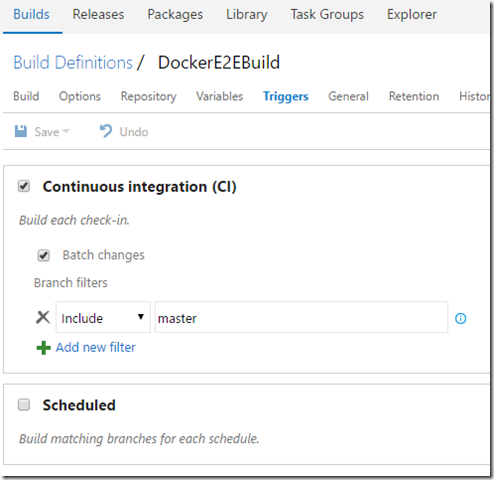 3. Add a build step to Build the .Net Core app. If you take a close look at the source code you will find that there is already a docker-compose.ci.build.yml file. This file spins up a container and then builds the dotnet application which is later distributed in an image. 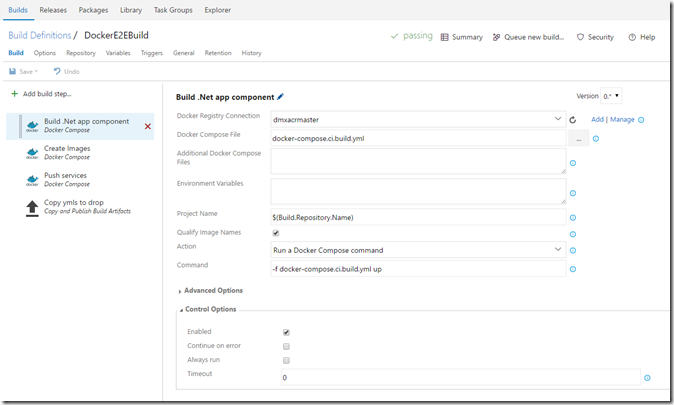 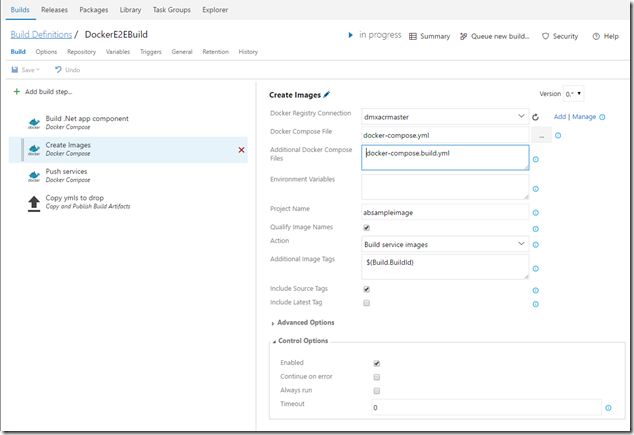 Let’s take a closer look: The docker-compose.yml file doesn’t contain information about images or builds to be used during build of service-a and service-b images. I commented them out to show where they could be.

I’m also specifying a project name “absampleimage” for later reference. And I’m tagging the created image with the ID of the Build run. I already know that I want to push this image to a registry later, so I qualify the image name based on my docker registry connection. 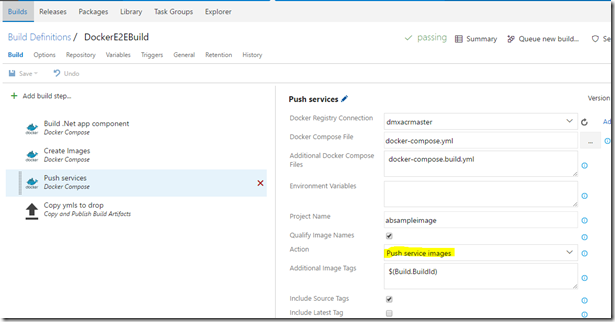 6. Let’s check if the images found their way to my Azure Container Registry using Azure CLI.

7. Now as we know that the images arrived at the registry, lets deploy them into an ACS Cluster. I want to use the docker-compose.yml file again to spin up the container infrastructure. So I add another step to publish the yml file as a build artifact. I’m takeing all ‘*.yml files I can find here.

Here’s where I created the artifact for the build drop. 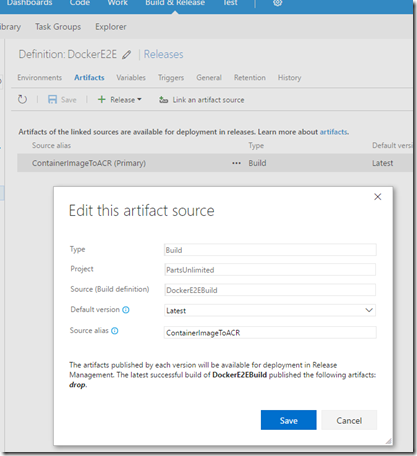 Here’s where I set the trigger. 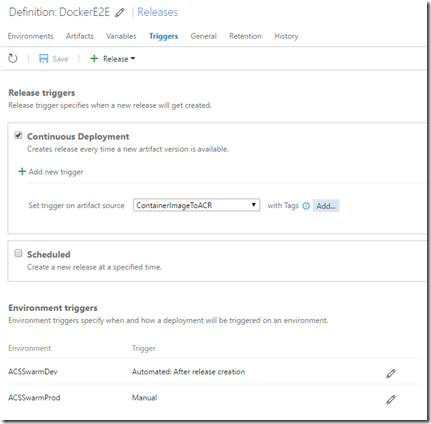 9. I created 2 environments. One is meant to be the development environment. One for production. The idea is that I can test the outputs of the build before I send them to productive use. 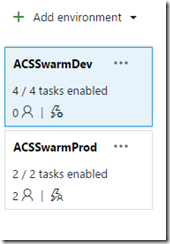 10. I added the first agent phase and added a task to copy the files from the build artifacts folder to the master of my Docker Swarm cluster via ssh. These files are the docker-compose files which I need to spin up my cluster. I’m using an SSH endpoint here into my cluster.

11. In the next task I run a shell command on the cluster manager. I want to run a docker command however I want to run it against the docker-swarm manager, not the docker deamon. (If in doubt read this post).
So I export an environment variable (DOCKER_HOST) which redirects all calls to docker to port 2375 where the swarm manager is listening. Afterwards I create an environment variable containing the BuildId. I can reference this variable within docker-compose files now. Then I login to my private container registry to be able to pull images and afterwards I run docker compose again. This time I’m using another override file called docker-compose.acsswarmdev.yml.

In this file I specify that the Build ID will serve as tag for the images to be used. This way I make sure that I’m using the freshly generated images from the previous build run.

Here’s the command I’m using above:

- Mind the && between the commands. If you leave them out it might happen that the environment variables can’t be found.

- Be careful: Line breaks will break your command.

- Mind the –d at the end. It makes sure your container cluster runs detached and the command prompt won’t be stuck.

12. After this there should be an application running on my Docker Swarm Cluster. I can check this here. Your cluster will – of course – have a different URL. I don’t hide the URL so you can find out how it is composed if you don’t find yours. Basically you are connecting to the DNS of your Public Interface on Port 8080 if you set up a standard ACS Docker Swarm Cluster.

13. Now I can test the application manually. To make this testing “official” I added another “phase” to my deployment. The “server phase”.  During this the deployment is paused, the deployment agent is released and the deployment won’t finish until I manually push the trigger again. In my case I also added some instructions for the person doing the manual step.

During Deployment it will look  like this, when this point is reached.

If you click the clock, here’s what you get: 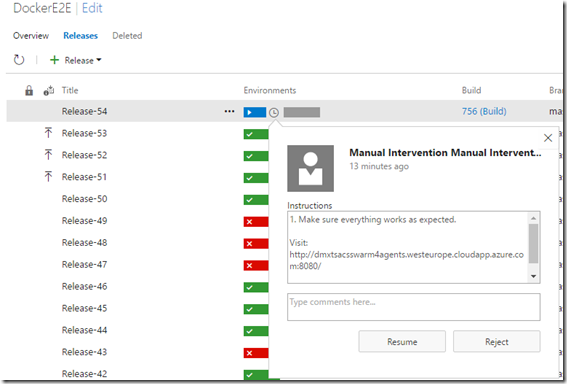 13. After successful sing off I want to tag the images as “stable” in my registry. Therefore I run the following command on my swarm master where all the images are available already:

What it does is quite simple. Again, we’re setting up environment variable. Then we tag both service images which currently have the build ID as tag with “stable”. Afterwards we push both of them to the registry.

14. We’re done with our dev environment. I created  another environment, which is set up pretty equal, however it uses the images with the “stable” tag which is specified in the docker-compose.acsswarmprod.yml file and it deploys into a differnt cluster.

It works. It’s pretty much and it took a while to figure things out. You could now scale up and down the number of containers using docker commands and you could scale up and down the number of underlying machines using Azure CLI to adjust the performance of your system. Pretty cool I hope this can work as basis for your own deployments. Have fun with Docker, Azure Container Services, Azure Container Registry, Docker-Compose, Docker Swarm, GitHub and VSTS