We’re back! We’ve had a pretty incredible couple of weeks at the PDC and WinHEC. Based on what we talked about you can imagine we are all rather busy as we transition from milestone 3 to beta. We trust many of you are enjoying 6801 (or perhaps we should say 6801+). Over the next few weeks we’re going to start posting on the engineering and design of the specifics of different aspects of Windows 7 that we’ve talked about. Some posts will be very detailed and others will be a bit more high level and cover more territory. In all cases, we’ll be watching the comments carefully and also looking for opportunities on follow up posts. Thank you!

One of the big themes of Windows 7 from a design perspective (as you might have seen in Sam’s PDC session and certainly a topic we have talked about here) is making sure that you are “in control” of what is happening on your PC. This post, by senior program manager Sean Gilmour, is about “notifications” or the balloon popups that come from the system tray. In Vista we offered some controls over this area and in Windows 7 we have worked hard to make this an area that defaults to more well-behaved functionality and is also much more tunable to your needs. By improving how Windows itself uses the APIs and “guidelines” we want to encourage other ISVs to do the same. This topic is a great example of how the whole ecosystem comes into the picture as well and so we hope developers reading this will see the passion around the topic and the desire for software on Windows to take the steps necessary to honor the your intent. --Steven

Where We're At Today

Windows can be a busy place – with many things vying for your attention, even while you’re trying to do work. One we hear a lot about from you is the system notification balloons – those little pop-ups that appear above icons in the notification area (typically right side of the taskbar near the clock). In this post I’ll be talking to notifications sent utilizing Shell_NotifyIcon function provided in Windows, not custom notifications, often called “toast”, like the notifications presented by many applications (some like Outlook even from Microsoft). We see these in instant messenger programs, printer notifications, auto updaters, wifi and Bluetooth utilities, and more – these often use custom methods to present these “balloons” from the system tray, not necessary the Windows API. People have made their feelings loud and clear – Windows is too noisy and the noise distracts from the work at hand. Here are some quotes from the Windows Feedback Panel that illustrate that point.

“Too many notification messages, esp. re: security (eg. Firewall), activation”

“Notifications telling me my system is secure, when I know it is secure, are annoying”

And some posts from the blog discussions

@Lyesmith writes “The single biggest annoyance in the taskbar is notification balloons.”

Figure 1: Number of notification sent per session as a percentage of total sessions - August through September, 2008

So, as shown in the above chart, used sparingly and in the right context, notification balloons can be rather useful. Unfortunately, that isn’t what is happening today. Instead the notification area often feels like a constant scrolling billboard of messages some important, many not. So what’s the answer? It’s a big area to tackle – there are system notifications, third party notification, and custom notifications. For Windows 7 we chose to focus on making sure Windows and its in-box components notify you responsibly and don’t contribute to the noise in the system. Ideally the ISV community will follow suit and as you’ve seen in some sessions, we’re doing this work in Windows Live for example. One of the reasons we focused internally was data showing that Windows components are responsible for at least 28% of the notifications presented. Additionally, we were able to identify seven Windows components that are mostly responsible for that noise. In all, 20 applications account for 62% of the notifications presented. The following chart shows the break-out.

Figure 3: Which software accounts for notifications - August through September, 2008

Our effort to quiet the system and make sure you are in control took the following approach:

While there are many other efforts going around notifications and the notification area I’m going to focus on Action Center. In a nutshell, Action Center is a central location for dealing with messages about your system and the starting point for diagnosing and solving issues with your system. You can think of Action Center as a message queue displaying the items that need your attention that you can manage on your schedule. It serves as an aggregate for ten components in Windows Vista that contributed a large number of somewhat questionably effective notification balloons, but notifications that could not just be eliminated. At the heart of the Action Center effort is the idea that your time is extremely valuable it should never be wasted. To that end we took three steps.

First we looked hard at the messages we were sending and worked to reduce balloons and clarify messages. We took the following steps:

The last filter led to our second step. We decided that all messages need to have an action associated with them - a solution, if you will, to whatever problem we were presenting to you. This meant cutting any FYI, Action Success, and Confirmation messages. It also meant that the way we presented these messages would be action based. For example, we replaced, “Antivirus is out of date”, with “Update Antivirus Signatures.” We believe that we should let people know specifically how to resolve an issue instead of making them guess or read lots of text. This is the heart of the other goal of Action Center – to help people solve system issues quickly and conveniently.

Finally, we designed the user experience (UX) of the Action Center in two parts. The first and most immediately visible is system icon in the notification area, which is a "lighthouse" in 6801. In the spirit of our efforts, this icon replaces five notification area icons from Vista, further reducing the clutter and noise in the system. The lighthouse icon provides a high level view of the number of messages in Action Center and their importance. It also has a fly-out menu on single left click which lists the four most recent notifications and supports you acting on messages contextually. We give the people the ability to click on a notification in that fly-out menu and immediately go to the UI to solve the issue. Again, the focus is solving issues instead of simply notifying.

The second part of the UX is the control panel, which builds upon the icon and fly-out by serving as a repository for all messages as well as providing more details about the issue and the solution. It is also action based so the layout emphasizes messages and the corresponding solutions with even more detail. Additional actions are available if you expand the UI to view them. Finally, we know that we won’t always have messages about the issues a person might be having on their machine. To make sure you can solve those issues, we provide top level links to Troubleshooter and Recovery options. 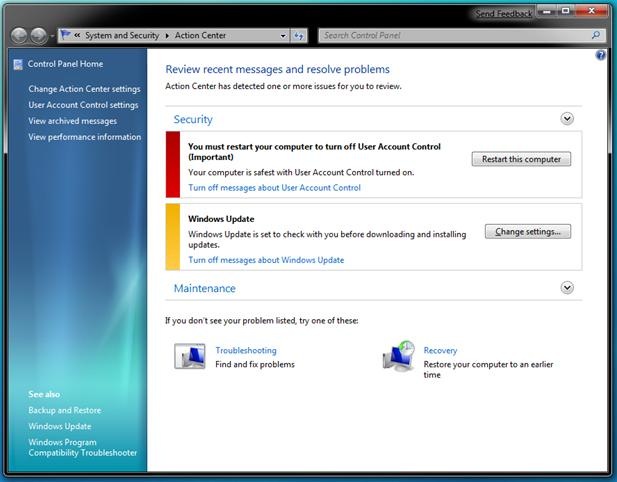 Action Center boils down to understanding that your time is valuable and that it is your PC you want to control, not be controlled by your PC. We reduced messages, focused on solving issues not just telling you about them, and streamlined the experience so you can focus on what you what to do not want Windows needs you to do. We are aiming to get most sessions down to zero notifications from Windows itself. This reduction in notifications could significantly increase the possibility that the notification balloon will be effective in delivering its message and prompting user action as shown in the Figure 2 (notification click through).

We will of course be evangelizing to ISV the goal of following this direction and reducing notification balloons – and we believe we’ve taken the first steps to making Windows a quieter place. Hopefully you will find it less distracting and easier to work with.