How many times have you been awoken by your phone, tablet or PC blaring an alert first thing in the morning, telling you it’s someone’s birthday (worse, someone you hardly even know) ? Or reminding you it’s time to go to an optional conference call in the middle of the night (your time), that was sitting unnoticed in your diary?

As mobile platforms have evolved, sometimes favoured functionality in old versions gets sacrificed in the name of quick progress, and may be eventually added back in future. The Windows Phone 7 journey is a great example – compared to Windows Mobile 6.5, there were lots of features which didn’t exist yet most people either didn’t notice, or they did notice but quickly stopped whining, dried their eyes and got on with the rest of their lives.

Windows Phone 8 misses one feature that was present in many old mobile phones, (including that first “Stinger” phone, the Orange SPV, which showed up more than 11 years ago), namely the idea of sound profiles – you could set up several named settings (Meeting, Silent, Outdoor, Normal, etc), and easily switch between them, maybe even automatically. Later versions of Pocket PC-based phones had an array of 3rd party software that could not only create & manage profiles – a feature that didn’t exist on the PPC platform – but could even switch profiles on a schedule, so when you went to bed, the phone went to quiet mode but came back to life in the morning so the alarm still worked. 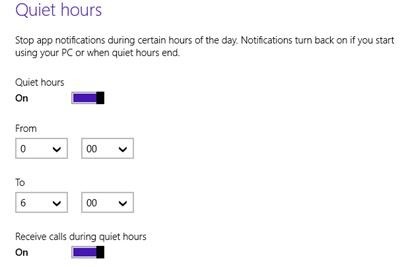 Here’s a handy added-feature to Windows 8.1 which could be particularly relevant to hypnagogic tablet users, namely the ability to shut the machine up for specified periods of time. It’s even enabled by default.

To set up your preferred Quiet hours, either navigate through settings (Settings charm |

Change PC Settings | Search and apps | Notifications) or save yourself a lot of clicking or poking, by typing quiet hours at the Start screen, and select from the search results.

Maybe we’ll see the same Quiet Hours functionality built into the next generation of Windows Phone…? In the meantime, at least you can quickly switch between ring mode and silence by just pressing one of the volume controls on the side of the phone, then tapping the sound icon on the top right of the screen.