Today I published a new Ruby on Rails sample, the Office 365 VCF Import/Export Sample. It's basically a simple tool that allows a user to export contacts from her Office 365 mailbox to vCard files, or import vCard files into her contacts.

But wait, there's more! Instead of implementing the Contacts API in the sample, I created a separate Ruby gem and implemented a portion of the Mail, Calendar, and Contacts APIs. That gem is published on rubygems.org for you to install and use in your projects.

The look and feel of the sample app owes a LOT to the great work done by Michael Hartl in his Ruby on Rails Tutorial.

The sample app basically uses the Contacts API in two ways: to create new contacts and to get existing contacts.

When the user signs in, the app presents a list of existing contacts, sorted alphabetically by display name. The list is paged, showing 30 contacts at a time. Here's what that looks like using the ruby_outlook gem:

The wrapped_contacts variable is a JSON hash of the returned contacts.

When the user clicks the "Export" button for a contact, the app gets all fields for that single contact, using its Id. Here's how that's done with the ruby_outlook gem:

The contact variable is a JSON hash of all the fields of the contact. That is used to build a vCard stream, which the user can download. 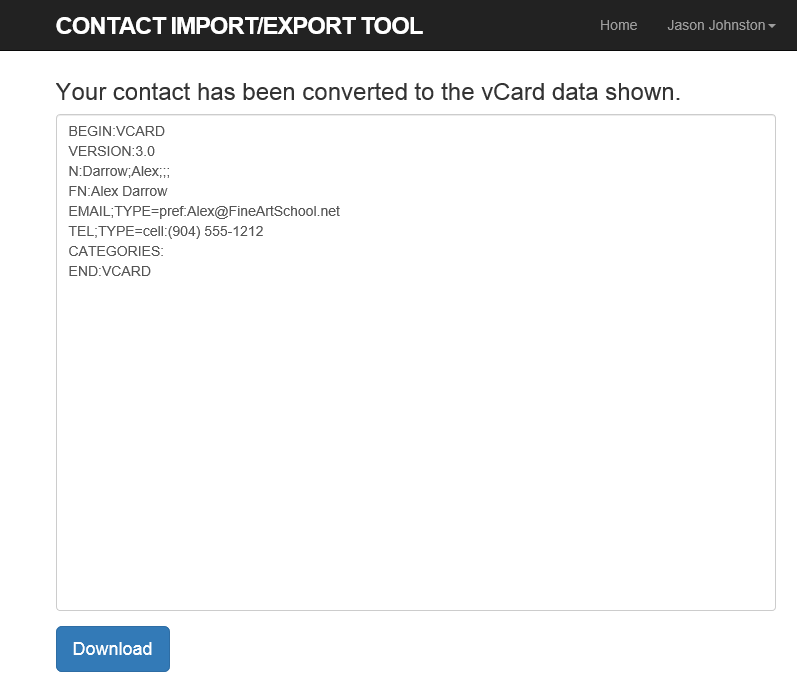 When the user clicks the "Import" button on the main page, they are given the option to enter vCard data manually, or to open a local vCard file for import.

When the user clicks "Import" on this page, the vCard data is transformed into a JSON hash conforming to the Contact entity defined by the Contact API. It then uploads that to the server via the ruby_outlook gem:

More on the ruby_outlook gem

The gem doesn't just implement the Contacts API. It implements the following:

You may have noticed that there's a lot here that isn't implemented. For the stuff that isn't there, I created a make_api_call function that allows you to call any part of the API that you need. If you look at the source for the gem, you'll notice that all of the implemented functions (like get_contacts for example), use the make_api_call to do the actual work. Following their example, you can implement any other API call you want. Let's take a look at an example.

Using the gem to create a folder

The gem currently has no functions for working with mail folders. However, you can use the make_api_all function to do the work. The details on creating a folder are documented here. Using that information, you can do the following to create a subfolder in the Inbox:

Using similar methods you should be able to call anything that the APIs support.

Go download the gem, the sample, or both! As always, I'd love to hear your feedback in the comments or on Twitter (@JasonJohMSFT). Feel free to report issues or submit pull requests on GitHub!