First up on our list is one of my favorite behaviors that we shipped, the GoToStateAction!

What is it?
As you know, you have the ability to define and modify your own visual states in your applications: 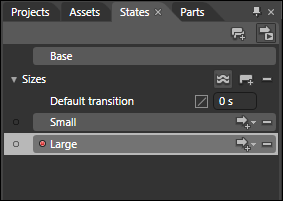 That is where this behavior comes in. The GoToStateAction allows you to easily switch visual states given an appropriate event using just your Properties Inspector. The following screenshot shows you the standard behaviors UI customized with the properties exposed by GoToStateAction: 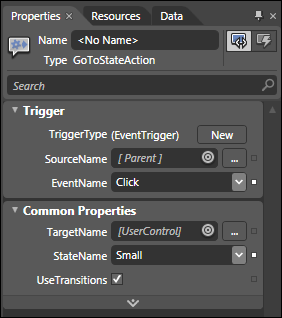 Let’s look at some of these properties in greater detail.

Using It
Like I mentioned earlier, this behavior primary functionality lies in allowing you to change the visual state. How it does might require some further inspection, so let’s look at the various properties in more detail.

Picking the Visual State
The visual state is set via the StateName property. By default, you will see all the states defined in your root scope (ie: UserControl or Window) regardless of where you drag/drop this behavior onto. You can change this by targeting this behavior at another element.

For example, the default target is my UserControl where I have two states defined:

If I were to target another element, such as a Button that contains its own states, the StateName list is populated with those states instead:

I spoke a lot about changing the target that your states come from, so let’s look at the TargetName property where the element you wish to target is actually specified.

You can change the default by clicking on the little circular icon in the value editor to visually pick another element from your Artboard or Objects and Timeline panel:

If you are trying to pick something that isn’t easily selectable visually, you can hit the little … button to see a flat listing of all of your elements. That is similar to what you see in the Objects and Timeline panel.

Conclusion
Hopefully this helped provide you with a summary of the GoToStateAction and how it can be used. If you have any questions, please feel free to comment below.