The good MGA question and how to post it.

Posting a good WGA question – a how-to guide, with the reasons behind the requests!

There are two acronyms which I tend to use almost interchangeably – WGA (Windows Genuine Advantage) and MGA (Microsoft Genuine Advantage). Both refer to Microsoft’s technologies and surrounding procedures to reduce the level of pirated software on the market and in use. The technology is built in to most Microsoft software, and like all things manmade, it can go worng (sic.). When it does go wrong in the case of Windows XP/Vista/7, help is available in the appropriate TechNet Forums (as well as in the MS Community forums and other third-party forums such as sevenforums.com and sysnative.com).

I’ve been answering questions in the MGA forums since early 2010, and now have over 10,000 MGA threads under my belt in the TechNet forums alone. In that time I’ve seen a lot of very badly-phrased questions, a lot with insufficient data, and very few that have everything needed in the Original Post (OP – which can also mean the person who made the Original Post).

Asking a question in a forum sounds simple – and it is, if you follow the basic guidelines which are usually posted at the top of any forum as a ‘sticky thread’. Unfortunately, most people get to the forums by Googling and so they end up on a particular post which could be in the middle of an ancient thread which everybody has abandoned long ago – with the result that the new Original Poster (OP) is generally ignored when he adds a new post asking a question relating (or not!) to the original one.
A GOOD question always contains more information than is needed for the responder to make an intelligent/educated guess at a solution. It takes a little time to write – in the case of the MGA forums, generally no more than 5-10 minutes even at my two-finger typing speed. It’s certain to take less time than actually reading this blog post in full!
A BAD question contains at its worst, a one-sentence statement/question such as ‘my screen’s gone black and it tells me my Windows is Fake – what do I do?’. This means that any responder has to first establish the ground-rules (again!) and ask questions, when they could be helping others who have asked GOOD questions!

Asking a GOOD question in the MGA forums which I moderate is actually very simple, as MS has given us a useful simple-to use tool called MGADiag.exe which gathers a lot of the information we need into one place in a repeatable format which makes it possible to do initial diagnosis pretty quickly (most of the time!).

The MGADiag tool is downloadable from this link…. https://go.microsoft.com/fwlink/?linkid=52012

PLEASE don’t just Google/Bing 'MGADiag' and pluck a download from whatever site comes up – most of the non-MS sites that link to the tool actually link to older versions which give less information, and don’t really understand Windows 7 – let alone Windows 7SP1! Over the past few years, I hope I’ve managed to persuade MS to remove all the older versions of MGADiag that it had as downloads, and redirect their various links to the one I’ve given above. This latest version is compatible with XP(RTM/SP1/SP2/SP3), Vista (RTM/SP1/SP2) and Windows 7 (RT/SP1)

How to produce the MGADiag report and post it : 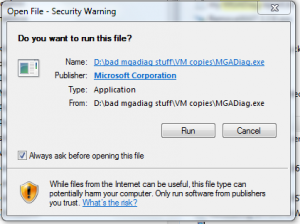 (If you untick the ‘Always ask…’ box before clicking run, you won’t see that Security Warning popup again for MGADiag) 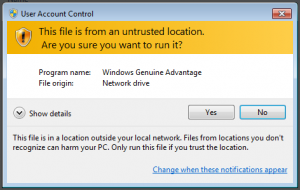 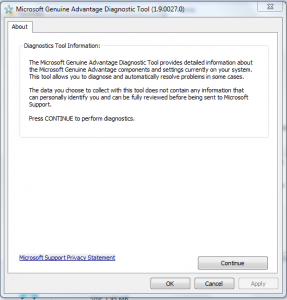 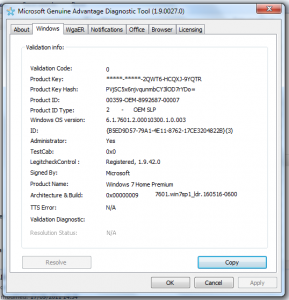 Figure 4 - The results and Copy button

Include in the post the requested data above, and anything else you think may be relevant (it’s way better to have too much data available than not enough!) and then copy/paste the entire MGADiag report from Notepad to the post. Please DO NOT use any kind of special formatting when pasting it – this can make it difficult to read the entire report without a lot of scrolling!

In an effort to reduce the amount of SPAM that was being inserted into the Forums a while back, MS have introduced a requirement that new posters wait for a period of a few days for their account to be ’verified’ before being able to include hyperlinks in their posts. Every MGADiag report includes a minimum of four hyperlinks.

To get around the restriction you can do either (or both!) of the following…

If push comes to shove, you can delete the lines with hyperlinks in – but please, only delete those lines!

..and that’s all there is to posting a GOOD question!

In the (artificially-created) case above, the wordage gives enough background to the history to point at a particular area of the MGADiag report – and the data there tells us that the probability is that the ‘Recovery media’ created from the other machine was not the correct one for this machine, so the mismatch causes the OEM_SLP self-activation to fail. The responder would therefore advise changing the Product Key to the one from the COA sticker. This should allow normal activation to proceed.

Assuming the response is the correct one, the OP replies taking about another 10 minutes (running another MGADiag report and posting that is usually enough) for the post and about 10 minutes to run the fix.

The responder should then either suggest another fix if there are still problems, or confirm that everything is OK. – about 3 minute

Assuming this is right first time around, then it takes the OP a total of 30mins, and the responder a total of 6 minutes.

With the wrong or not enough information in the Original Post, the time needed by the responder can rise dramatically – and every response from the OP takes another 10minutes. I have had to spend half an hour attempting to get the necessary information from an OP through a number of exchanges, when I could have perhaps assisted another 5 people in that time – and by the end, I was certainly less inclined to give of my best to the OP.

I hope this little post – which took me about 3 hours to write – manages to help anyone posting with an MGA problem – and the basic principles also apply to many other forums as well.

A GOOD QUESTION ALWAYS GETS A QUICKER ANSWER – if there’s an answer to be had at all!