Introduction to Streamlined Topologies and MinRole in SharePoint 2016 (Pt1)

Traditional SharePoint Server deployments from 2007 – 2013 all had the three main tiers:

As SharePoint Server evolves and new features and services are added. A common question asked in the field is what components should run on the Application Server. My most frequent answer is it depends on the role and the load on the server, which always requires data modelling, piloting and testing.

However with the arrival of MinRole in SharePoint 2016, the goal is to help reduce the complexity of designing a SharePoint farm by using the streamlined topology concept, but enforcing this at the deployment level of the servers. By separating Search and Distributed Cache from the application server it helps better load planning for our servers.

One may ask why Search? Search is the most popular service application in SharePoint, and it is also one of the most resource intensive and it is has its own topology requirements. Therefore the decision to separate this as a MinRole is great, as we have the option to plan and grow search separately from our core servers in the farm.

One may also ask why Distributed Cache? Distributed Cache was added to the product in SharePoint 2013 and is a critical component towards the functionality of SharePoint. It is either required by or improves the following features:

What does this mean for Farm deployments in SharePoint 2016?

We will now have a minimum 4 tier layer, increasing 1 layer from SP2013. Keep in mind this topology is without Search, with Search it moves to 5 tiers (all tiers I mention include DB as its own tier):

The graphic below indicates a shift in topologies when using SharePoint 2016 MinRoles. 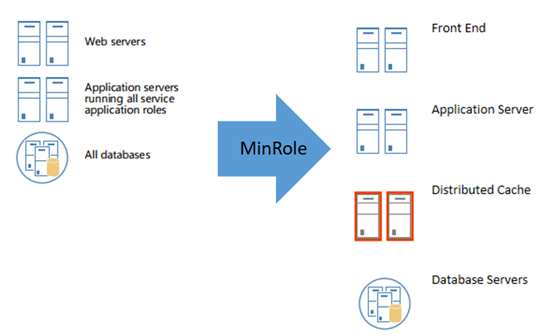