This is the first part of a multi-part series about how we can leverage GIT as a Distributed Version Control System (DVCS) for authoring SCOM Management Packs with Visual Studio Authoring Extensions (VSAE). This first part talks about my motives and provides some general information.

Why do I need Version Control for MP authoring?

You don’t, but it can make your life (much) easier once you understand at least the basics and can handle the tools… So what are the benefits of a Version Control System (VCS)?
With a proper VCS you can:

The change tracking capability, the easy way of reverting things back to a previous change and the possibility to share work with colleagues were the decisive factors that I started thinking about VCS.

What is the best VCS? Which one should I choose?

Honestly, I cannot answer that, because I have no clue and I don't want to start a flame war :). There are a lot of VCS with different approaches, strengths and weaknesses available. Microsoft provides for a long time the Team Foundation Server (TFS), now also available as a service in Visual Studio Online.
But you might have noticed, that we have a current tendency to use another product called GIT. GIT is OSS and originated from the Linux Kernel Hacker community. An increasing number of our own products gets primarily published on a central GIT platform called GITHub. One of my favorite example is the PowerShell module for Microsoft Azure (see here).
So I decided to use GIT because

GIT it is, so how can I get more information?

GIT is very well documented. Wikipedia provides a very good brief overview . Then there is an excellent free book about GIT available . But be warned: reading this book might scare most of you to death like it did to me.

To prepare for the real interesting stuff we have to install GIT and Visual Studio 2013/2015 with VSAE (there are many blog posts available about VS and VSAE installation, so I skip this part). You can download all Windows versions of GIT for free here. You will need to download the most current version of GIT in the right version (32/64 Bit) for your system. The latest release (2.7.4 at the time of writing) supports the automatic installation of a very handy tool, the GIT Credential Manager (GCM), right with the regular GIT package. If you use an older version, you have to download and install the GCM as well.

The installation itself is pretty straight forward. Simply execute the .EXE and use these options: 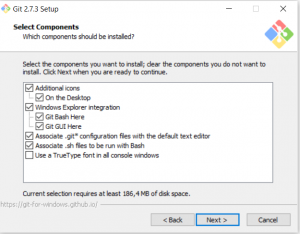 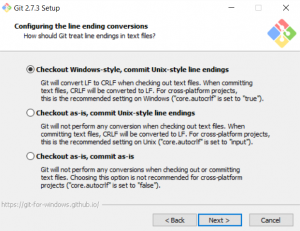 Now you might think: “I trust your statement with using a VCS and I follow you installing GIT on my box, now what?”
Great! In the next post I will explain how GIT is working and can be used, so stay tuned!

Isn’t that called a cliff-hanger?