It was nice to see Microsoft come out with the Server 2016 Preview CTP and the headless Nano server that goes along with it. You can download the preview image and extract the Nano server WIM image from it and then use it to actually create the Nano server.

The big deal is you have a highly modularized and if I may say so – a kernel-ized version of Windows – which is almost a bare server OS on top of bare metal. It is as low as you can go on a traditional Windows Server image. Well then you get to create this headless server OS, and incrementally and modularly add components on top of it. Bear in mind this is different from Server Core, though conceptually similar. However with Server Core you had the ability to slap a GUI if needed and pollute it more and increase the attack surface(bad habits die hard/hardly). In the case of a Nano server you just cannot add the GUI. The access to the server is purely through PowerShell/WinRM – by establishing a PS session to the Nano Server, you can read and write to the session, thereby reading and writing into the Nano server. This makes for very interesting use cases such as provisioning an extremely agile, lean, light, micro-server that is just tailor made for the application that you have the need to deploy and nothing else. Increase manageability, reduce space consumption, reduced boot up times, reduce attack surfaces and the all goodies which comes with saying ‘NO’ to extraneous stuff. 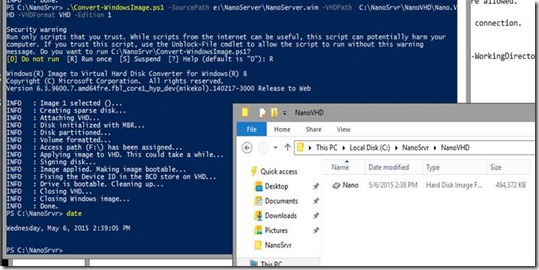 Attaching the Nano server VHD and starting up in Hyper –v

As you can see above when you connect to the Nano server you get a dark screen (picture to the right above - you just see the dark screen with no way to type or interact with it - it is not even a terminal)  – that’s it. It is meant to be like that, with your route to it only through remote PS over a PS session or WinRM.

On cloud based deployment scenarios OR even otherwise it is very advantageous to have a server image like a Nano server which can be spun up at near lightning fast speeds, consume less host resources as opposed to a Server CORE image or even other server versions. A Nano server consumes less disk space, (the image is in the 400 Mb range - less than half a GB), consumes very less memory and chances of penetrating it are less. So consider that you have invested $$ on a nice server and using Hyper-V you can run 100s of more Nano server OS instances, than if you were running the regular Server image. Now imaging a hoster, whose business is spinning up VMs – the hoster can make his investment go much much further with a Nano server. Now imagine a Hyper-Scale Cloud provider, and the economies of scale possible with a Nano server - where previously they had to always standup a traditional Server image regardless of the underlying requirement, and unlike in the previous case where network deployments had to transport several GBs OS image  - Now,  have to transfer only about 480MB in the network for mass large scale deployments across datacenters (in addition to all the benefits stated before such as lightning fast boot times, reduced footprint, disk space consumption, less attack surface, less resource consumption such as memory and I/O etc.,. )