Let's dig deeper into the internal structure and the role each key operating system component plays. The figure below is more detailed diagram of the core Windows system architecture and components. Note that it still does not show all components (networking in particular). 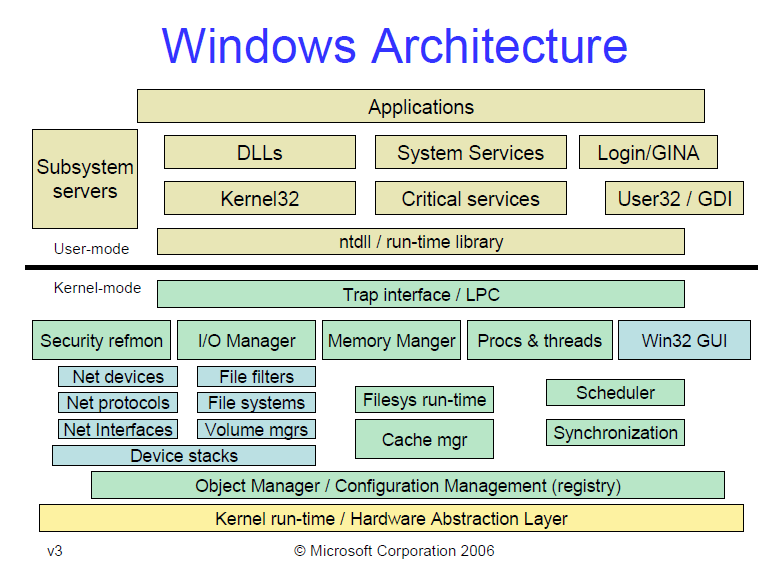 User and kernel modes are two processor access modes, where a kernel mode refers to a mode of execution privilege that grants access to system memory and all CPU instructions.

Before we continue let's just have a quick definition for virtual memory. Virtual memory , also known as virtual RAM, allows hard disk space to be used as if it were additional memory. In this manner, the user mode processes have access to more memory than is actually available to them.

In the user mode and just above the line that divides the user and kernel modes is the Ntdll.dll. Ntdll.dll is a special system support library primarily for the use of subsystem DLLs.

Now let's move on to the kernel mode. Kernel mode is the privileged mode of operation in which the code has direct access to all hardware and all memory, including the address spaces of all user mode processes . Kernel mode components:

The kernel mode in Windows is comprised of the Windows Executive, which includes the Executive Services, the kernel, and the hardware abstraction layer (HAL).

The kernel consists of a set of functions in Ntoskrnl.exe provides the most basic operating system services, such as thread scheduling, first-level interrupt handling, and deferred procedure calls. The kernel resides between the Executive Services and HAL layers.

The other major job of the kernel is to abstract or isolate the executive and device drivers from variations between the hardware architectures supported by Windows.

One of the crucial elements of the Windows design is its portability across a variety of hardware platforms. The hardware abstraction layer (HAL) is a key part of making this portability possible. The HAL is a loadable kernel-mode module (Hal.dll) enables the same operating system to run on different platforms with different processors.

Also part of the kernel is the device drivers. Device drivers in Windows don't manipulate hardware directly, but rather they call functions in the HAL to interface with the hardware.