Note: this blog uses Visual Studio 2012 but the instructions for VS 2010 are the same.

This blog describes using the nightly NuGet packages with Visual Studio 2012. Note well that the packages come with no guarantees and they do not substitute for the official installers which contain the official MSI and NuGet packages. And of course, don’t use your dev machine for anything important.

In contrast to compiling the code yourself, it is possible to use the nightly NuGets with Visual Studio 2012 installed so that you can use the project templates.

As Web API is not in the GAC it is very simple to update – just get the nightly NuGets and you are done. For MVC and Web Pages you still need to work with the Global Assembly Cache (GAC) so you do need the GacUtil tool for updating assemblies in the GAC.

Under the Visual Studio Tools menu select Options and then Package Manager and add the feed – it should look like this: 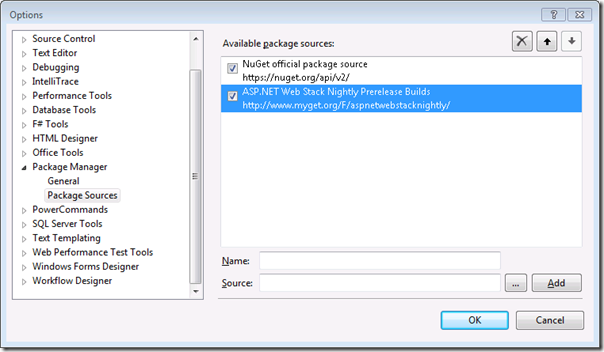 Assume we have an ASP.NET MVC4 Web Application Visual Studio project (below we created a Web API but it should work for any of the project variants). Under the Visual Studio Project menu, select Manage NuGet Packages, then select Updates from the MyGet feed you just added, and then select Include Prerelease: 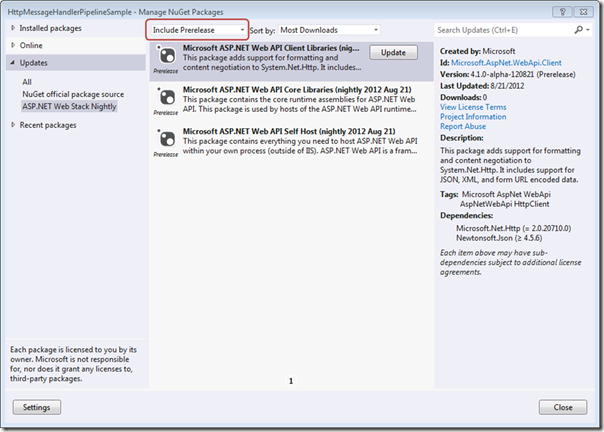 Install the updates and close the window.

For Web API you are all set – nothing else is needed! However, if you are using MVC or Web Pages then before you can run the project you have to update the GAC with the new assemblies which NuGet downloaded and stuck in the packages folder which you can find in your solutions folder. You can get a view of the assembles by typing the following in the packages folder 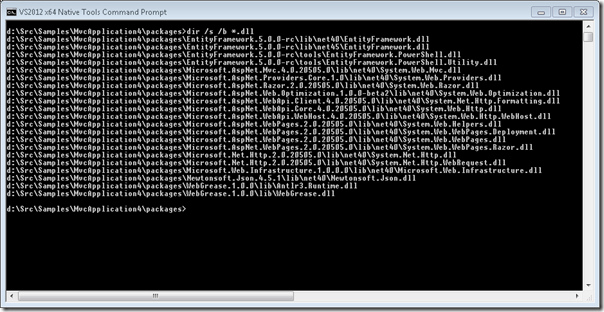 The list below is the set of DLLs that are GAC’ed in VS 2012. Look for the assemblies on the list below and match them against the directory list above. Depending on which project variant you picked you may not have all of them – that’s ok.

For each of the assemblies that match the GAC’ed list install them in the GAC using GacUtil (running as Administrator) like this:

You are now ready to run your application. When running in the Visual Studio debugger you can verify that you use the new assemblies by looking at the Modules window available under the Visual Studio Debug menu. It should look something like this: 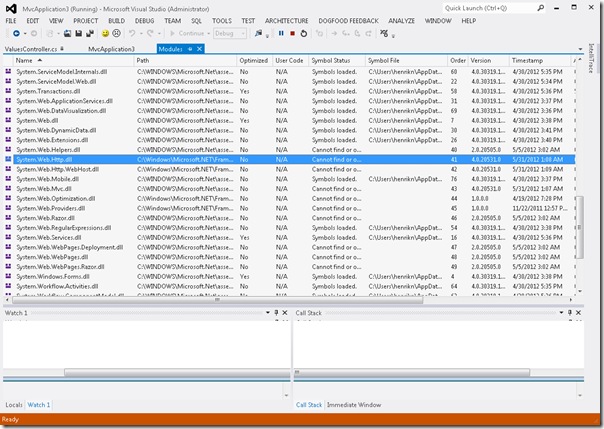 The version numbers should correspond to the numbers used to name the folders under the packages folder we looked at above.