Delegation of administration in SMS/SCCM/ConfigMgr has always been a challenge. I’ve never seen a company where there wasn’t some type of delegated administration when it comes to management of computers, both Desktop and Server. Many groups just don’t trust one another. This lack of trust leads to some very creative delegation solutions. I’ve seen some pretty creative and hard to support implementations. Usually these solutions are developed internally that start off small get adopted as the way of doing business. Thankfully with System Center 2012 Configuration Manager a new feature called Role-Based Administration (RBA) is included to make it easier to delegate and effectively permission administrative tasks.

First I would like to define “Delegation” and what that really means. The Bing dictionary list delegation as:

Delegations that I normally encounter are in environments which have separate Desktop and Server support teams. Each team manages their assets with different standards, governance and processes that almost always are incompatible. “One Console to Rule Them All” is generally the desire from those who own the corporate Microsoft spending points. I mean, that really makes logical sense right? However, throw logic out the window because that is not reality. Groups will go at great lengths to ensure that they are the only administrators capable of inflicting damage via a management platform. We’ve all read about the horror stories from misguided advertisements that cause many support people to be up all night fixing the issues..

One creative implementation that comes to mind while thinking about RBA was a hard core support team from [insert your favorite company] that had responsibility for assets across the globe. They had a massive amount of AD Security groups, DCOM, NTFS Permissions and custom MMC’s to lock out admins to a very granular level. They spent a ton of time supporting and fixing their delegated solution. The increased support for creative solution consumed a lot of their time. Nobody was thinking into the future about supporting their creative solution, rather they were more focused on just solving their immediate problem. Furthermore, turnover causes knowledge loss which can make supporting these creative solutions a nightmare.

Now System Center 2012 Configuration Manager and RBA enter the picture. This is an excellent way to provide a level of delegation of duties for a management platform across all Windows (yes there are others) assets. Is it an answer to all those creative and hard to support delegation ideas? No it is not! For example, you could not provide a role for an admin to not see a particular application, yet still have the ability to deploy it within the console. Yes, I’ve been asked that before. RBA is the ability to apply a strict set of governance and delegation with permissions for logically grouped functions.

I use the following when consulting with my clients about RBA:

This is a simplified logical design diagram which layers the key concepts in RBA: 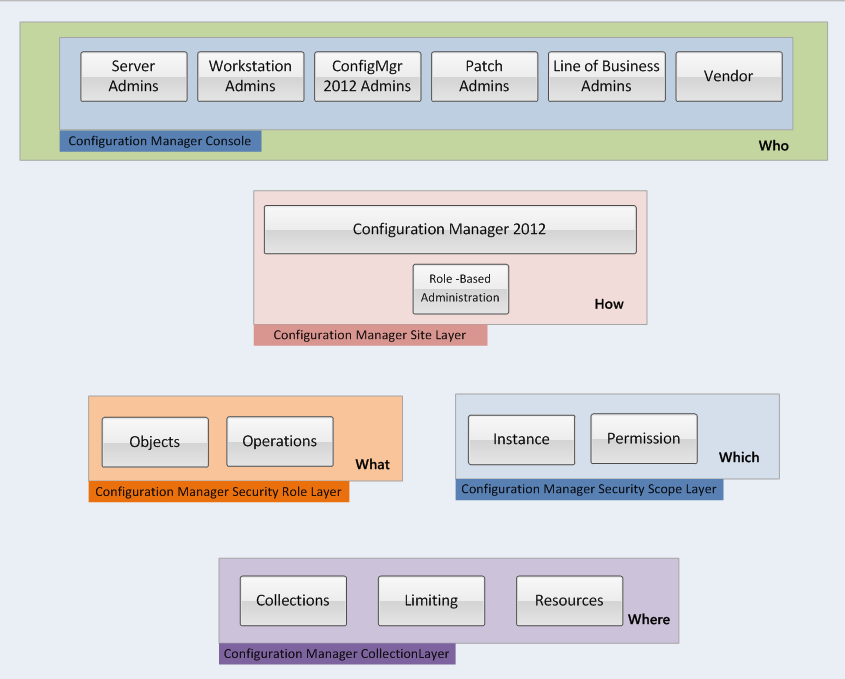 Any person who requires Administrative/Management functions within Configuration Manager 2012

Configuration Manager 2012 is managed from a console application which groups administrative tasks into logical workspaces. They are as follows:

The console application can be distributed to the administrator’s workstations so long as they have network access. Please see the Appendix for the Operating System support and Network Port requirements.

Note that an Administrator will only see the objects that they are allowed to see. The following layer sections describe how RBA is accomplished.

In Configuration Manager 2012, Security Roles are used to collectively group objects and permissions (operations) for assignment to an Administrator. Instead of an individual permission set on a single instance of object, the Security Role provides a single Role assignment to an administrator; reducing the overall complexity with permission management. An “object” in the Security Role is something that you want to manage access to and “permission” is the operational functions, such as Read, Modify and Delete.

For example you might have a requirement to create Roles for Server and Workstation administrators who should be limited to managing Configuration Manager Client Agent settings on their targeted assets. To solve this requirement a Role would be created and permissions could be assigned (see Security Scopes in the next section).

By default any Administrator assigned this Role would be able to change the settings on both the Server and Workstations. To limit the permissions specific Security Scopes are required to be configured. That will be covered in the next section.

These roles can be copied and customized to fit many different sets of Role requirements.

For example let’s review our Security Scope Roles defined in the previous section:

Each type, Server and Workstation Administrator must have the ability to manage specific Configuration Manager Agent Client settings for the targeted assets and would be added to the Client Setting Role.

To “limit” the administrator access two Security Scopes are defined:

In addition two Collections are defined and contain the targeted Assets:

Finally the new Security Scopes are assigned to the applicable administrators. This process would prevent a Desktop Administrator from changing the client settings for any asset in the Server Collection. The opposite applies to the Server Administrator.

Additional Scopes and Collections can be generated to create very granular Security Scopes. For example a Security Scope could limit a Server Administrator to a specific set of assets and only allow Application Management.

There is a default scope that is generated during the installation of Configuration Manager 2012. All objects (if applicable) must have a Security Scope assigned. It is important to note that this default security scopes does not follow new objects. Any new object has a scope that is based upon the administrator’s security scope which is creating the new object.

Here are some links for more information:

and one of my favorites: