Lately, there’s been a resurgence of interest in hiding script inside files of other types; sometimes this is known as a polyglot file. On Twitter, there’s been some excitement about a new tool that creates GIF/JavaScript polyglots.

Neat. But the secret is quickly revealed if we peek at the raw bytes: 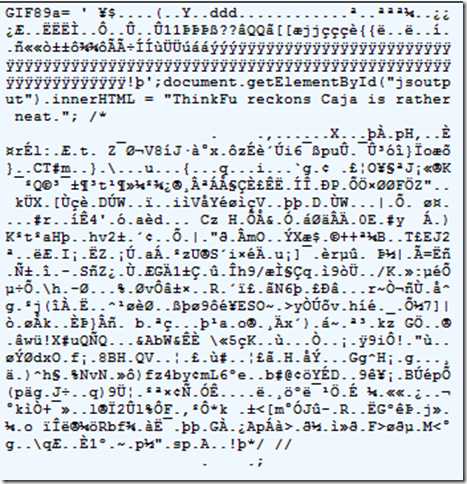 As you can see, this image starts with the standard GIF89a signature. Then, the cleverly-crafted file takes advantage of the fact that the subsequent bytes encode the size of the image. The creator specifies that the image shall be 8,253 pixels wide by 8231 tall, which is encoded using the hexadecimal values 0x203d 0x2027, which are encoded in GIFs as 3d20 and 2720 with the least significant byte first.

So, why is this interesting? Is it a horrible security hole?

Back before IE8, IE would eagerly seek out HTML even inside files served as images, and as a consequence, websites that accepted user-supplied images and served those images were at risk because any HTML documents “sniffed” from the files would be running in the security context of the victim site. IE8 changed things such that HTML would never be sniffed from files delivered with an image/ MIME type.

MIME-Sniffing HTML from images was much more dangerous than sniffing script, because script runs in the context of the hosting page, not in the context of the server that delivers the image/script. So, in order for something bad to happen today, a victim site must not only allow polyglot files to be uploaded, but also it must allow an attacker to inject a <SCRIPT SRC> tag into the markup that the site serves. In most cases, this is not very practical/interesting (especially because any such injection probably would be an XSS in and of itself).

Nevertheless, there’s still a bit of interest here because polyglot files could conceivably be used as an attack against Content Security Policy. Consider a CSP-protected site that decides to allow visitors to specify any SCRIPT SRC they like, relying on CSP to ensure that the SRC attribute points to a “safe” server. Also, our victim site must allow image uploads to a path under the CSP-specified script-src. With a polyglot file, the server is conceivably at risk, despite CSP.

There are a few best practices that help protect against attacks like this:

We can add this response header using Fiddler's Filters tab to prototype the effect. As you can see below, Chrome 39 also supports the nosniff directive, but Firefox 36 does not:

As far-fetched as the attack scenario may be, it still may make sense for browser vendors to require a proper MIME type on any SCRIPT response when CSP is in use. They might even want to broaden the existing logic such that image/ responses can never be used as anything other than an image.