This tutorial recaps the multitouch features in WPF 4, as of the Beta 2 release.
I also included two basic samples to get you jumpstarted with working code:

If you are not familiar with multitouch, I recommend these articles on multitouch in Windows 7:

Now that you are a touch expert,  we can simply focus on explaining WPF’s support.

Post beta2, WPF 4 will also support touch in some of the controls (for example, ScrollViewer). The list of controls and level of support is not yet finalized, so don’t hold it against me; I will update this post as soon as I get details.

Again, raw multitouch support begins at UIElement, UIElement3D and ContentElement.
All of these types now support a TouchDown, TouchUp, TouchMove, TouchEnter and TouchLeave event.
Each of these events have a corresponding routed event and a tunneling (Preview) event.

If you drill down through these events, you will find they all have a TouchEventArgs parameter that holds a TouchDevice member and can get you a TouchPoint.  The TouchPoint is the meaningful data since it tells you whether it was a Up,Down, or Move TouchAction, and it tells you the Position where the touch happened.

I have included a class diagram below; the names are pretty descriptive.

Handling raw touch in WPF is really as simple as listening for these events and reacting to the points and the actions.
Unlike Manipulation where you do have to opt-in by setting the IsManipulationEnabled property to true,  event notifications for raw touch are available without an explicit opt-in

A sample application for raw touch

Of course, for raw touch I had to create the canonical

Disclaimer: I took the code written by Sela to demonstrate the .NET wrappers for Windows 7 multitouch and simply ported it to WPF 4.  Taking their apps and porting them to WPF 4 was about a 15 minute exercise.

When running the app, simply apply multiple fingers through the window to have the drawing pad draw strokes that follow your fingers’ movements.

That is how simple manipulation is. All the raw-touch data, translated into these simple Delta Matrixes!

Inertia adds physics to a manipulation to make it feel more natural.  As expected, it works on all UI elements that support manipulation. The way to think of inertia is that it carries through the physical momentum of a manipulation. For example, if you are implementing a translation manipulation that is moving an image across the X-axis, inertia will continue the manipulation a bit longer than the actual manipulation contact and it would decelerate at a speed you define, simulating the momentum and the friction to stop the translation.

To add support for inertia, we simply update our old code and listen to a new event and then add code to handle inertia on our manipulation Delta.

A sample application for Manipulation and Inertia: 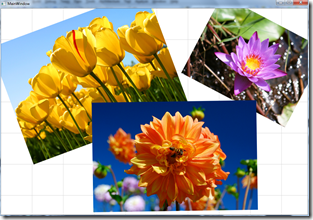 This sample uses the code above to manipulate the images on the canvas.

The viewer supports scaling, translating, and rotating the images, using multitouch gestures. There is also inertia support as you execute any manipulation.

The table below explains how logic is handled for scenarios with different options enabled.

**Summary** This tutorial provided a basic introduction to multitouch in WPF. As you have seen, WPF supports both raw-touch and manipulation (with inertia) for all WPF UI elements.  Using WPF’s new touch support, you can accomplish quite a bit with just a few lines of code. The support compliments and integrates quite well with the platform.