Multi-targeting is a feature introduced in Visual Studio 2008 which allows developers to use new versions of Visual Studio to target earlier versions of the .Net platform.  It allowed users to target both the new 3.5 and 3.0 and the previous 2.0 profile with the same IDE.  Visual Studio 2010 continues this trend by adding support for CLR 4.0 and even allows for further sub-targeting through several framework profiles.

At a compiler level this works by providing binary compatibility with previous versions of the CLR (or producing an error when it’s not possible).  It doesn’t warn developers about using new language constructs on older frameworks so long as they function in the target framework.

Take the following code sample as an example.  It is taking advantage of implicit line continuations which is a feature introduced in VB.Net 10 and not available in Visual Studio 2008.  Since it’s just syntactic sugar it compiles just fine in an application targeting 4.0 or any previous version of the framework.

In a limited set of scenarios though developers want to use Visual Studio 2010 to develop code which will also be compiled by a previous version of the compiler.  Hence they want warnings in Visual Studio when new language constructs are used.

The 10.0 version of vbc.exe introduced a new switch named langversion to provide just that.  It allows developers to specify a version of the language to target.  The compiler will then issue an error when a language construct which was introduced in a later version is used.  This switch is not available from the IDE though and must be manually specified in the project file.  To do so edit the .vbproj file and add the following element under the main ItemGroup element.

Once the project is reloaded errors will start appearing for new language constructs.  Notice how our earlier sample now produces the errors for the usages of the new implicit line continuation construct. 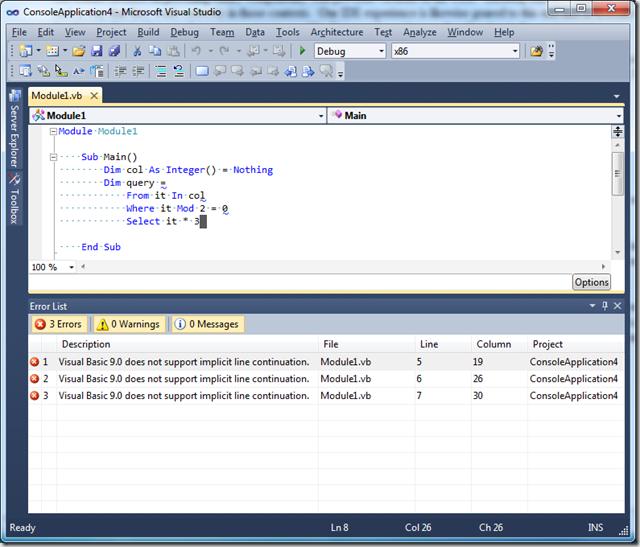