The first blog entry was focused on highlighting a sequence of functionality tests that were recently concluded back in February 2008 against Teradata version 12 using SQL Server 2005's Analysis Services (and the latest beta v12 .NET Provider from Teradata.)

This follow-up blog entry will focus on the benchmarking result efforts (up to 1000 simulated users) of queries against Analysis Services.  What was recorded was average response time per SSAS query using a Teradata backend source, comparing response times when Teradata v2R6.2.1.3 is used and v12 is used (both using the v12 .NET Provider).

The testing focused on optimizing the Project REAL Toolkit data warehouse with a goal of identifying the optimal concurrent workload for sub-second response time and indentifying best practices for a ROLAP environment.

Database preparation was the first step, and scope of that effort was as follows:

For conducting the testing effort, we focused on the following:

The successful execution of the engagement resulted in the following benchmark results (which was based on SQL Server 2005 Analysis Services SP2, Update 3175 applied): 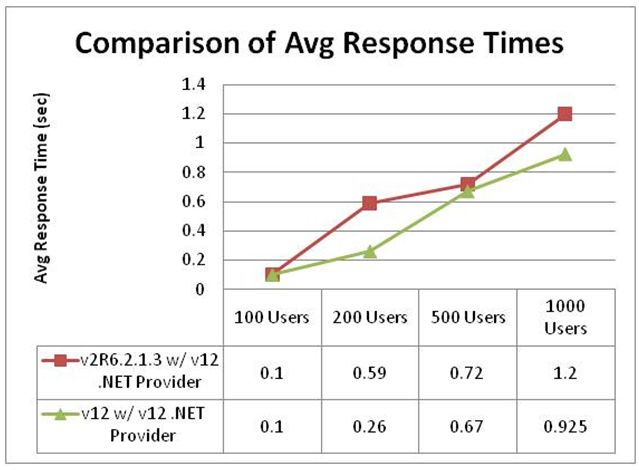 The hardware configuration used for the testing was as follows:

Note that besides Analysis Services, SQL Server's RDBMS and the Visual Studio Team Suite Testing tool also ran on this server. On average, only 25% of server resources were available to SQL Server Analysis Services for the tests - which certainly reduced the overall performance of Analysis Services capabilities. However, this benchmarking test was a comparison of TD v2R6.2.1.3 to TD v12...so it didn't matter that resources were consumed by other services...since the benchmarking tests were resource and query "apples to apples" similar.