You may recall that in May my evangelist colleagues and I launched a series of workshops around a bevy of API Starter Kits designed to kickstart HTML5/JS and C# developers into building their own, unique Windows 8 applications. Since then we’ve seen a few of your efforts appear in the Windows Store including Because Chuck Said So and my very own Eye on Traffic (which leverages the TomTom Traffic Cameras API). 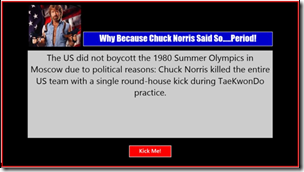 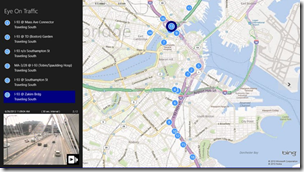 More recently I’ve been working on porting my Windows 8 Starter Kit (that leverages both the Bing Maps and TomTom APIs) to Windows Phone, and I thought I’d share some of my experiences in doing so.

In a previous post, I spent a bit of time describing the architecture of the Windows 8 version, and it was certainly my goal to get as much code reuse as possible, though of course, I knew that the form factor of a Windows Phone device would necessitate rethinking the user experience. For this post, I’ll split the discussion in two parts: the services layer that handles the API calls and the front-end user experience.

From my architecture overview, you’ll recall there are two primary class libraries involved:

For the base layer, APIMASH, there were two notable changes required.

Deserializing Byte Stream to a Bitmap

In the class to deserialize HTTP response payloads, I had a method that takes the binary response from a GET request for a jpg image and turns it into a BitmapImage. It turns out things work a bit differently between Windows 8 and Windows Phone in this regard.

The Windows Phone case is a near no-brainer:

But I’m not too proud to say the Windows 8 version had taken me a while to come up with. The primary challenge was that the argument to SetSource is an IRandomAccessStream versus a good ole System.IO.Stream Below is what you’ll find in the current Windows 8 implementation, thought I suspect I could clean this up a bit by leveraging WindowsRuntimeStreamExtensions.

There is a portable HttpClient that helps bring the light and airy HttpClient class to both Windows Phone and .NET 4, and that certainly seemed like the easiest approach for my porting effort. It does require adding a few dependencies like the Base Class Libraries, but the NuGet package makes that really simple to incorporate.

All seemed to work well at first, except that my cam images didn’t seem to refresh on demand; the existing image never refreshed, but other cam images were being pulled in just fine. That led me on a chase that included discovering that Windows Phone has this helpful feature called image caching (read about it here), and for a while I was convinced somehow that was the culprit. It was not.

Caching was indeed the root cause, but it wasn’t image caching, it was web response caching. Since each request for a given camera was hitting the same URI, and Windows Phone was caching the results, I was continually seeing the same image served from cache.

One workaround for this is to tack on a (meaningless) URI parameter that always changes, say using a GUID. Presuming the server responding to the URI just ignores the superfluous parameter, all is well. That seemed a bit hacky though and could have a performance or memory hit since the device would now be caching data it would never ever re-access.

The solution, elegant in its REST-fulness was a one-liner included before the call to GetAsync

As you may know, the preferred mapping option for Windows Phone is not the Bing Maps control but rather the one provided by Nokia as part of the platform (and available on all Windows Phone 8 devices). Knowing I’d be reworking some of the map user experience code (and being somewhat time constrained), I opted to pull out the Bing Maps API layer altogether.

Beyond that, the changes to the APIMASH_TomTom.cs implementation were incredibly minor:

From the look of the app on Windows 8 (shown earlier in this post), it should be clear that that specific user experience wasn’t going to transfer directly to Windows Phone, and in general, you should anticipate the front-end work of a port from Windows 8 to Windows Phone (or vice-versa) to require more thought, reflection, and elbow-grease than the plumbing (e.g., business logic and services layer).

There isn’t a single formula for revamping a user experience for a different form factor, and there are lots of decisions large and small that are part of the process, many very specific to your application. I will say that despite the great feature set of the Windows Phone Emulator, once I began to focus on the UX changes (versus the services implementation), I very quickly adopted a workflow of deploying and debugging right from the device. What seemed to make perfect sense when interacting with the emulator via the mouse – or even touch, since I have a touch enabled laptop – seemed awkward when actually holding the device.

I settled on the following UX for the phone version of the Starter Kit, and it’s quite obviously not feature-equivalent with the Windows 8 version, but I don’t think it needs to be.Notably, there’s no list view of all the cameras, but for the context of a Windows Phone (versus Windows 8) user, I don’t think that list is particularly useful, and the location of the user in context with the map view is paramount.

To get to this point in my development, I started with a File->New Windows Phone 8 application, and one-by-one pulled in some of the existing assets from the Windows 8 application, including:

Reworking the screens though was pretty much a rewrite with a bit of cut-and-paste; here are some of the things you should be prepared for:

Beyond that, I’ll leave it to you to crack open both projects and take a look at how I handle specific elements of the implementation.

Whoa! What about these Portable Class Libraries I hear so much about?

For those of you keenly following the evolution and merging of the Windows 8 and Windows Phone development experiences, you might be wondering why I haven’t mentioned anything about Portable Class Libraries:

The Portable Class Library project enables you to write and build managed assemblies that work on more than one .NET Framework platform. You can create classes that contain code you wish to share across many projects, such as shared business logic, and then reference those classes from different types of projects.

Wouldn’t that have saved me a ton of time?  Perhaps for the backend services implementation, but this wasn’t really a greenfield project, so did it (or does it in general) make sense to fix what ain’t broke: the Windows 8 version? For a real app that I’d expecte to evolve on both platforms, it might be worth going back and doing so to reduce the amount of duplicate code.

But I'm being a bit disingenuous here as well, I pretty much knew I’d be evolving this to Windows Phone soon after starting the Windows 8 version, so the real answer is a bit more tactical and job-related. Portable class libraries are a Visual Studio Professional (and above) feature; in the interest of reaching as large an audience as possible with our Starter Kits, we wanted to make it as free and easy as downloading Visual Studio Express and hitting F5.

If you do want to learn more about Portable Class Libraries and techniques for sharing code between Windows 8 and Windows Phone projects, there are a number of great resources, including: