Defenders think in lists. Attackers think in graphs. As long as this is true, attackers win.

A lot of network defense goes wrong before any contact with an adversary, starting with how defenders conceive of the battlefield. Most defenders focus on protecting their assets, prioritizing them, and sorting them by workload and business function. Defenders are awash in lists of assets—in system management services, in asset inventory databases, in BCDR spreadsheets. There's one problem with all of this. Defenders don't have a list of assets—they have a graph. Assets are connected to each other by security relationships. Attackers breach a network by landing somewhere in the graph using a technique such as spearphishing and they hack, finding vulnerable systems by navigating the graph. Who creates this graph? You do.

What Is the Graph?

Attackers can lay in wait on a compromised machine, using a password dumper such as mimikatz until a high value account logs on to the machine. Let's examine an example graph.

The cluster on the left is single Terminal Server used by hundreds of users. If attackers compromise this machine, they can dump the credentials of many users over time.

Figure 2 A compomised terminal server can lead to many credentials

How can attackers move laterally to get to the High Value Asset? 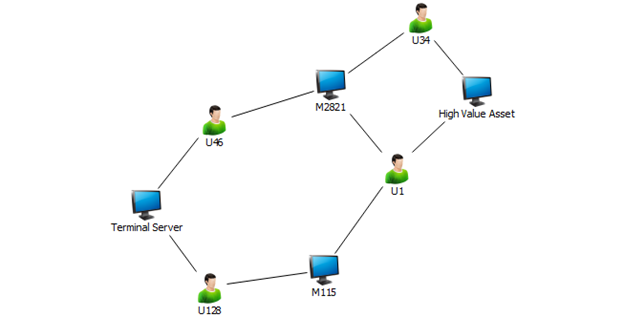 In a Windows network, when users perform certain kinds of logons (Interactive, Terminal Server, and others), those users' credentials (and single-sign-on equivalents such as a Kerberos TGT or NTLM hash) are exposed to theft if the underlying host is compromised. Beyond this, there are many kinds of relationships that create security dependencies:

And so on. There are indirect relations as well. A machine that has a vulnerability can be compromised, suddenly allowing attackers to create new edges in the graph. Or users may have an account in two untrusted domains with the same password, creating a hidden edge between domains.

What can you do as a defender? The first step is to visualize your network by turning your lists into graphs. Next, implement controls to prune the graph:

Defenders need to ensure that attackers don't have a leg up on them when visualizing the battlefield. In this contest, defenders can have the upper hand. They can have full information about their own network, whereas attackers need to study the network piece by piece. Defenders should take a lesson from how attackers come to understand the graph. Attackers study the infrastructure as it is—not as an inaccurate mental model, viewed from an incomplete asset inventory system, or a dated network diagram. Manage from reality because that's the prepared Defenders Mindset.

There are a number of papers about attack graphs. Here are a few:

A Graph-Based System for Network-Vulnerability Analysis by C. Phillips and L. Swiler, https://web2.utc.edu/\~djy471/CPSC4660/graph-vulnerability.pdf

[And thanks to @4Dgifts for mentioning the two below]