An Architecture for SharePoint Apps That Call Other Services

This post will show an architecture for a SharePoint provider hosted app that calls other services such as the O365 API for Exchange, Azure AD Graph API, PowerBI API, or a custom Web API.

This post is part of a series on building a SharePoint app that communicate with services protected by Azure AD.

I have been asked several times lately how a SharePoint provider hosted app can access other services such as Exchange Online API, PowerBI API, or the Azure AD Graph API.  This post will propose an architecture for how you to create a SharePoint provider-hosted app that calls services protected by Azure AD.  We will also discuss the benefits of this architecture.  I’m not going to show any code yet, we’ll get to that in an upcoming post.  For now, let’s agree on an approach.

Why Can’t I Just Use the SharePoint Access Token?

I’ve had this discussion with numerous developers.  If it’s all just OAuth, can’t I just use the access token that SharePoint gives me to call Exchange?  The answer is no.  When you create a new provider-hosted app using Visual Studio 2013, you are prompted to choose between a low-trust app or a high-trust app.  When creating a low-trust app, you choose the option to use Windows Microsoft Azure Access Control Service.

This enables our app to request an OAuth access token from Azure ACS to present to SharePoint Online.  This app is used for a very specific purpose: extending SharePoint.  This includes things like remote event receivers and deploying content to a SharePoint app web.  When the SharePoint app model was created, the Azure AD capability of issuing OAuth tokens wasn’t complete yet, hence why the current implementation relies on Azure ACS. 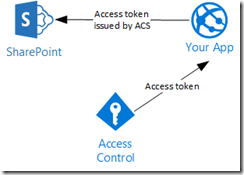 If I create my SharePoint provider-hosted app, run the application, and decode the OAuth token using a tool like my Fiddler extension that decodes OAuth tokens, I can see that the issuer is Azure ACS and the audience is SharePoint. 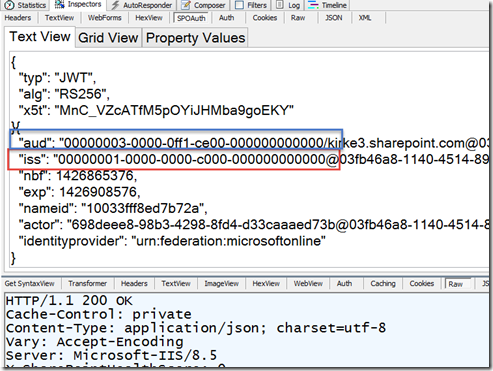 It is true that Azure Active Directory also enables the ability to register applications so that you can request an OAuth access token. 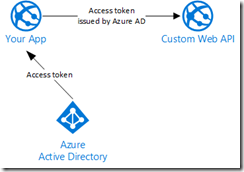 The token issued by Azure AD is not the same token as the one issued by Azure ACS, they differ by the claims they contain.  To show this, I used a different application (using the sample WebAPI-OnBehalfOf-DotNet on GitHub) and I decode the access token request to Graph API.  I see that the issuer is different.

More importantly, the audience claim is different.  The audience claim in this token is “https://graph.windows.net”, which is the Azure AD Graph API.  Tokens are intended to access a resource identified by the “aud” claim.

Even though there is an Azure Active Directory implementation behind O365, the current implementation of SharePoint provider hosted apps does not use Azure AD to issue OAuth tokens, it uses Azure ACS.  We have an issuer mismatch problem and the token issued by ACS cannot be used to call a different service that expects a token issued by Azure AD.  More importantly, each token is intended for a specific resource identified by the “aud” claim.  I show an example of this in the post Call O365 Exchange Online API from a SharePoint App where we have four different access tokens for four different resources.

A Tale of Two Tokens

We really need two tokens: one to call SharePoint using the app model (the one that uses Azure ACS), and a second one to call a service protected using Azure AD, such as the O365 Exchange API.

As mentioned in a previous blog post, Calling O365 APIs from your Web API on behalf of a user, we could introduce a custom Web API endpoint.  This opens up even more possibilities because we can delegate tokens on behalf of the current user, enabling us to delegate access.  Instead of our app just being a website that calls another service, we can leverage the much broader ecosystem that Azure Active Directory enables. 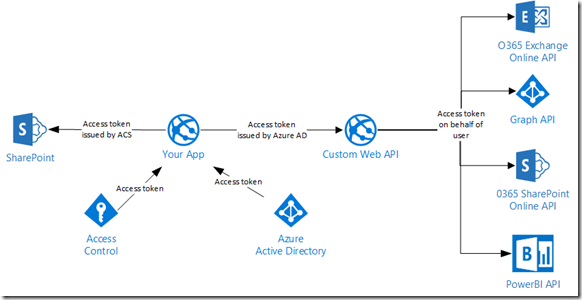 The Value of an API

Taking it a step further… now that we have a Web API, we can now expose that to multiple types of clients.  Those clients might be a web site written with PHP, Node.js, Java, or .NET, it might be a native client application, or it could be a multi-device hybrid application written with the new Cordova tooling in Visual Studio. 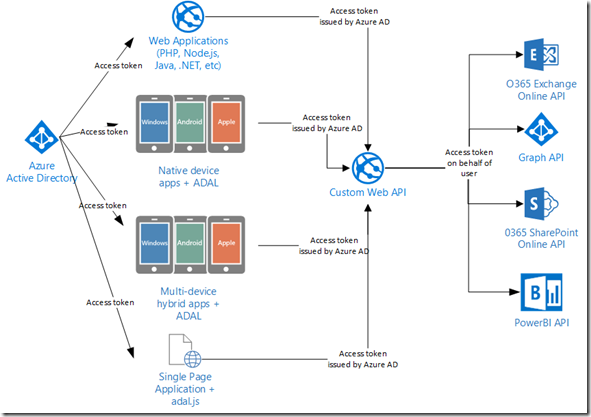 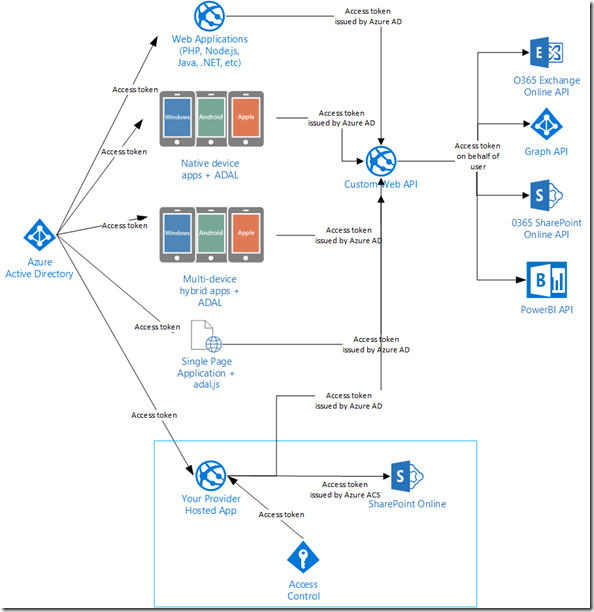 The key to making all of this work seamlessly for the end user is to change your app to authenticate against the same directory that you are using for O365.  An example of doing this is provided online, WebApp-WebAPI-OpenIDConnect-DotNet.  When the user accesses your application, they would authenticate against Azure AD and obtain an access token.  The very best part is that the end user doesn’t have to actually type in their credentials: because they have already authenticated against Azure AD when they accessed the O365 site, the same authentication cookie is used and the user is silently authenticated with your provider hosted app.

We’ll show an example of how to do this, but hopefully I’ve got you excited enough to see why this is so cool.

OAuth Fiddler Extension – extension for Fiddler that enables you to inspect OAuth tokens.