Support for SSL/TLS protocols on Windows

Secure Socket Layer (SSL) and its successor Transport Layer Security (TLS) are protocols which use cryptographic algorithms to secure the communication between 2 entities. It is just a secure layer running on top of HTTP.

Several versions of SSL have been released after its advent in 1995 (SSL 2.0 by Netscape communications, SSL 1.0 was never released). Here is the list:

SSL was changed to TLS when it was handed over to IETF for standardizing the security protocol layer in 1999. After making few changes to SSL 3.0, IETF released TLS 1.0. TLS 1.0 is being used by several web servers and browsers till date. What I have never understood, is there have been newer versions released after this, with the latest being TLS 1.2 released in 2008.

On Windows the support for SSL/TLS protocols is tied to the SCHANNEL component. So, if a specific OS version doesn’t support a SSL/TLS version, this means it remains unsupported.

Below table should give you a good understanding of what protocols are supported on Windows OS.

TLS 1.1 & TLS 1.2 are enabled by default on post Windows 8.1 releases. Prior to that they were disabled by default. So the administrators have to enable the settings manually via the registry. Refer this article on how to enable this protocols via registry: https://support.Microsoft.com/en-us/kb/187498

On the client side, you can check this in the browser settings. If you are using IE on any of the supported Windows OS listed above, then in IE, browse to Tools -> Internet Options -> Advanced. Under the Security section, you would see the list of SSL protocols supported by IE. IE supports only those security protocol versions, which is supported by the underlying SCHANNEL component of the OS. 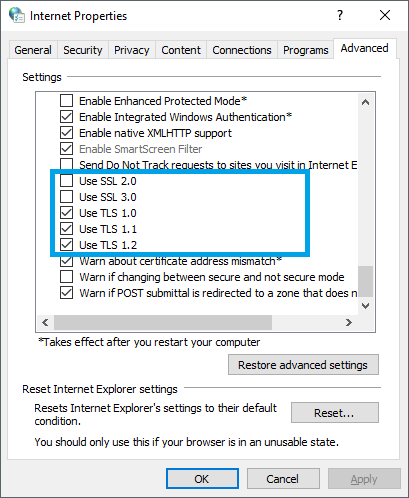 TLS settings in IE on Windows 10

Chrome supports whatever IE supports. If you intend to check the support in Firefox, then enter the text "about:config" in the browser address bar and then enter TLS in the search bar as shown below. 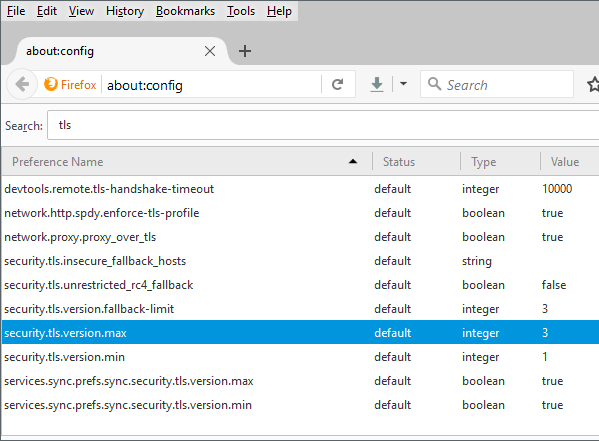