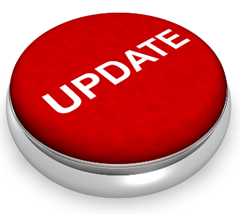 Issues that are fixed in the UNIX and Linux management packs

From reading the KB article – the order of operations is:

Additionally, we will add the steps to update Linux management packs and agents.

The first thing I do when I download the updates from the catalog, is copy the cab files for my language to a single location:

Then extract the contents:

Once I have the MSP files, I am ready to start applying the update to each server by role.

***Note: You MUST log on to each server role as a Local Administrator, SCOM Admin, AND your account must also have System Administrator role to the SQL database instances that host your OpsMgr databases.

My first server is a management server, and the web console, and has the OpsMgr console installed, so I copy those update files locally, and execute them per the KB, from an elevated command prompt:

This launches a quick UI which applies the update.  It will bounce the SCOM services as well.  The update usually does not provide any feedback that it had success or failure.

You can check the application log for the MsiInstaller events to show completion:

You can also spot check a couple DLL files for the file version attribute.

Next up – run the Web Console update:

This runs much faster.   A quick file spot check:

Lastly – install the console update (make sure your console is closed):

On this next management server, I will use the example of Windows Update as opposed to manually installing the MSP files.  I check online, and make sure that I have configured Windows Update to give me updates for additional products:

The applicable updates show up under optional – so I tick the boxes and apply these updates.

After a reboot – go back and verify the update was a success by spot checking some file versions like we did above.

You would only need to update ACS if you had installed this optional role.

On any Audit Collection Collector servers, you should run the update included:

A spot check of the files:

I can use Windows Update or manual installation.

The update launches a UI and quickly finishes.

I was prompted for a reboot.

Then I will spot check the DLL’s: 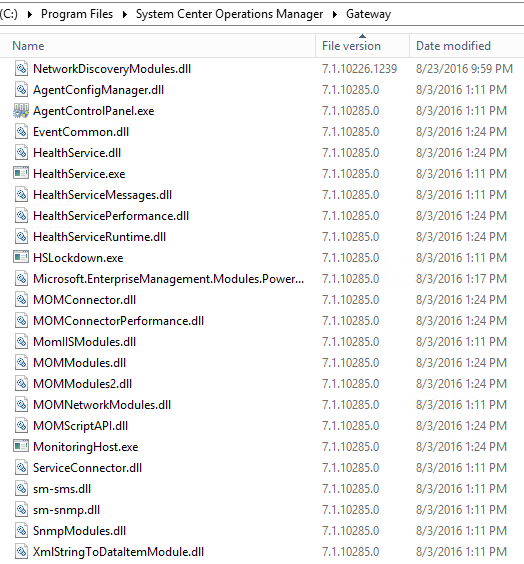 I can also spot-check the \AgentManagement folder, and make sure my agent update files are dropped here correctly:

***NOTE: You can delete any older UR update files from the \AgentManagement directories. The UR’s do not clean these up and they provide no purpose for being present any longer.

In the path on your management servers, where you installed/extracted the update, there are two SQL script files:

You should run this script with each UR, even if you ran this on a previous UR.  The script body can change so as a best practice always re-run this.

If you see a warning about line endings, choose Yes to continue. 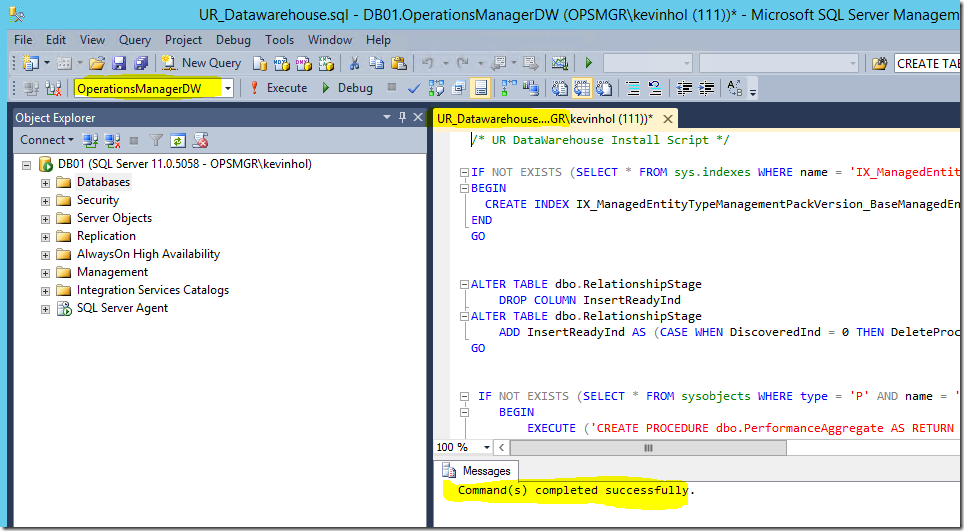 Click the “Execute” button in SQL mgmt. studio.  The execution could take a considerable amount of time and you might see a spike in processor utilization on your SQL database server during this operation.

You will see the following (or similar) output:   “Command(s) completes successfully”

You should run this script with each UR, even if you ran this on a previous UR.  The script body can change so as a best practice always re-run this. 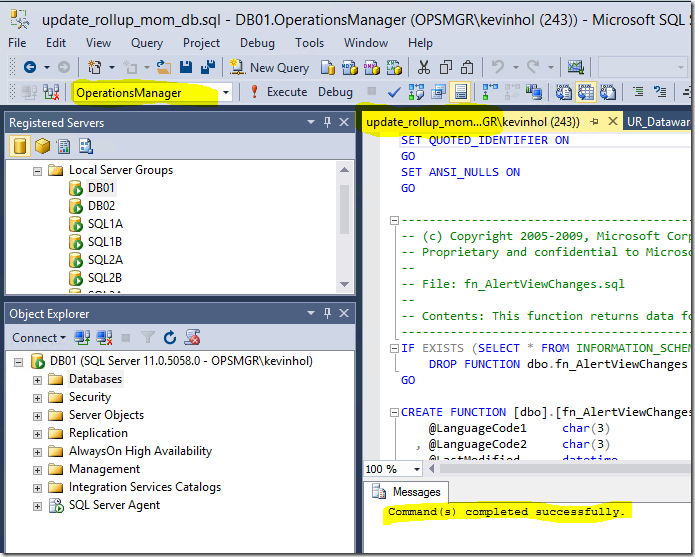 Click the “Execute” button in SQL mgmt. studio.  The execution could take a considerable amount of time and you might see a spike in processor utilization on your SQL database server during this operation.

I have had customers state this takes from a few minutes to as long as an hour. In MOST cases – you will need to shut down the SDK, Config, and Monitoring Agent (healthservice) on ALL your management servers in order for this to be able to run with success.

You will see the following (or similar) output: 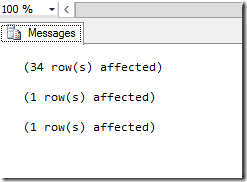 IF YOU GET AN ERROR – STOP!   Do not continue.  Try re-running the script several times until it completes without errors.  In a production environment with lots of activity, you will almost certainly have to shut down the services (sdk, config, and healthservice) on your management servers, to break their connection to the databases, to get a successful run.

Technical tidbit: Even if you previously ran this script in any previous UR deployment, you should run this again in this update, as the script body can change with updated UR’s.

There are 55 management packs in this update!   Most of these we don’t need – so read carefully.

The path for these is on your management server, after you have installed the “Server” update:

However, the majority of them are Advisor/OMS, and language specific.  Only import the ones you need, and that are correct for your language.  I will remove all the MP’s for other languages (keeping only ENU), and I am left with the following: 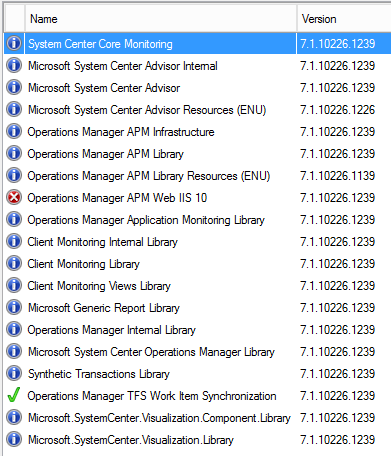 What NOT to import:

The Advisor MP’s are only needed if you are using Microsoft Operations Management Suite cloud service, (Previously known as Advisor, and Operations Insights).

The APM MP’s are only needed if you are using the APM feature in SCOM.

Note the APM MP with a red X. This MP requires the IIS MP’s for Windows Server 2016 which are in Technical Preview at the time of this writing. Only import this if you are using APM *and* you need to monitor Windows Server 2016. If so, you will need to download and install the technical preview editions of that MP from https://www.microsoft.com/en-us/download/details.aspx?id=48256

The TFS MP bundle is only used for specific scenarios, such as DevOps scenarios where you have integrated APM with TFS, etc. If you are not currently using these MP’s, there is no need to import or update them. I’d skip this MP import unless you already have these MP’s present in your environment.

However, the Image and Visualization libraries deal with Dashboard updates, and these always need to be updated.

I import all of these shown without issue.

Agents should be placed into pending actions by this update for any agent that was not manually installed (remotely manageable = yes): 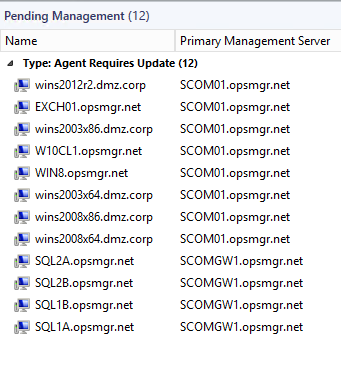 I manually re-ran the server MSP file manually on these management servers, from an elevated command prompt, and they all showed up.

You can approve these – which will result in a success message once complete: 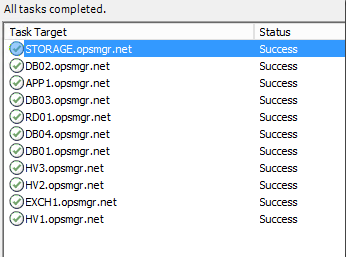 Soon you should start to see PatchList getting filled in from the Agents By Version view under Operations Manager monitoring folder in the console: 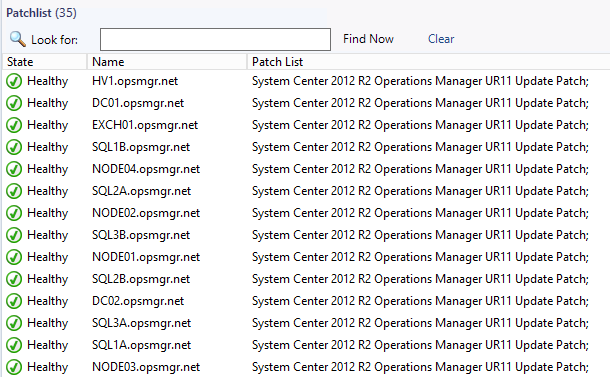 The current Linux MP’s can be downloaded from:

****Note – take GREAT care when downloading – that you select the correct download for SCOM 2012 R2. You must scroll down in the list and select the MSI for 2012 R2: 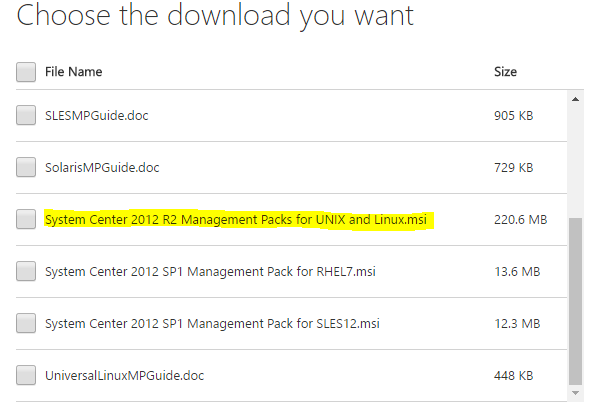 Update any MP’s you are already using.   These are mine for RHEL, SUSE, and the Universal Linux libraries. 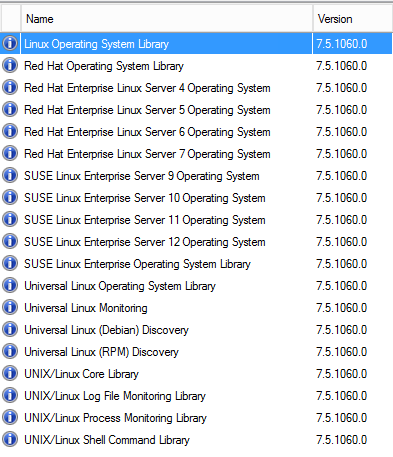 You will likely observe VERY high CPU utilization of your management servers and database server during and immediately following these MP imports.  Give it plenty of time to complete the process of the import and MPB deployments.

Next – you need to restart the “Microsoft Monitoring Agent” service on any management servers which manage Linux systems.  I don’t know why – but my MP’s never drop/update in the \Program Files\Microsoft System Center 2012 R2\Operations Manager\Server\AgentManagement\UnixAgents\DownloadedKits folder until this service is restarted.

Next up – you would upgrade your agents on the Unix/Linux monitored agents.  You can now do this straight from the console: 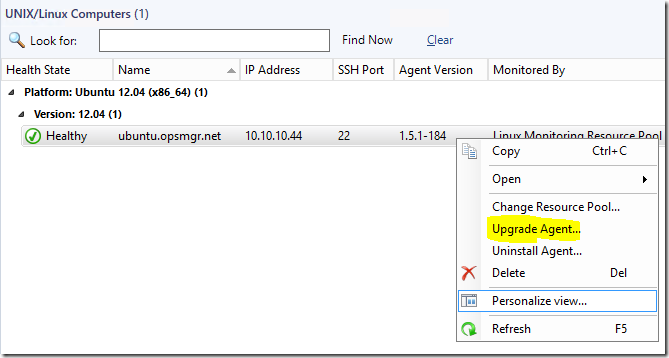 You can input credentials or use existing RunAs accounts if those have enough rights to perform this action. 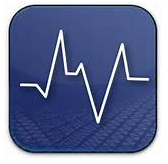 This is an important step.  I have consoles deployed around my infrastructure – on my Orchestrator server, SCVMM server, on my personal workstation, on all the other SCOM admins on my team, on a Terminal Server we use as a tools machine, etc.  These should all get the matching update version.

Now at this point, we would check the OpsMgr event logs on our management servers, check for any new or strange alerts coming in, and ensure that there are no issues after the update.

See the existing list of known issues documented in the KB article.

1.  Many people are reporting that the SQL script is failing to complete when executed.  You should attempt to run this multiple times until it completes without error.  You might need to stop the Exchange correlation engine, stop all the SCOM services on the management servers, and/or bounce the SQL server services in order to get a successful completion in a busy management group.  The errors reported appear as below: