Resolved: The first is with the Group Policy setting "Force a specific default lock screen image" under

In many cases trying to enabled, change or update this doesnâ€™t appear to work for new or existing users in the environment.

This will happen if "Prevent changing lock screen and logon image" policy is also enabled.

One of the key indicators of this is when you see the desired lock screen image in Settings under Lock screen as the preview but the controls to change are greyed out. 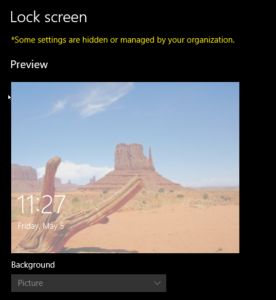 Many people have sent me that screen shot and said - "See, that's the image I want to appear!" not noting that since its greyed out it also means the "Prevent" lock screen is in play.  When Prevent is disabled it should look like this: 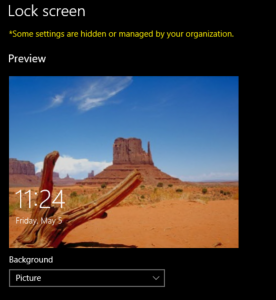 The workaround is to set "Prevent" to Disabled or Not Configured, apply that change and then make the desired updates to "Force".  If there are still issues with Force at this point, test applying it in an OU that blocks inheritance for all other polices to confirm there isn't something else in play.

The "Force" policy does work by default, with no other policies enabled.

The second issue is when Animate settings are changed on the system, the Lock Screen will be black. The time and other text will appear normally, the lock screen with work normally, users will just see black instead of the desired picture. 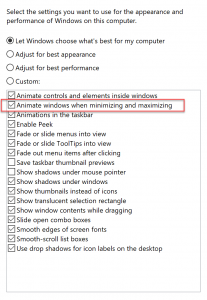 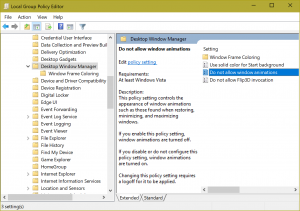 The workaround for this one is to not enable the policy or uncheck the setting.

This issue was present in 1607 and fixed with the last February Cumulative update but the issue seems to have returned in 1703 and we're currently investigating it.

The fix for the first issue implemented new image cache and algorithm.  Initially, when "Prevent..." was applied it would block any changes made to "Force..." policy.  After the May update this has changed and may have some side effects. Some reports I'm seeing are:

These symptoms are not all a result of the May update and are not necessarily all the same issue but one issue that we are working on is with the new image cache implementation.  The workaround for this issue is:

This comes into play if you view the lock screen and the logon screen as two separate entities.  In Windows 10 these two screens are closely linked and can be thought of as one presentation.  But in previous versions of Windows they were two elements.  The DisableLogonBackgroundImage is for the screen with logon box only.  Enabling this will present a solid color background.  In current Windows 10 builds this key in combination with "Force..." may not work as expected.

This issue has been fixed and will soon hit flighted builds for Insiders.