I just spent the past day trying to figure out the best way to hide scrollbars using pure CSS in the latest versions of every browser.  I wanted to be able to still scroll within the element, however, so using:

was not an option.  I looked at how Facebook hides their scrollbars in the chat window, I looked at recommendations made on StackOverflow, and I invented a lot of solutions on my own.  Eventually, I arrived at a solution that I like.

So first, a little background... my preliminary research revealed the following:

The StackOverflow-recommended approach was to give my element scrollbars, wrap it in a

This is the approach Facebook uses for their chat window. However, there are two problems with

See this screenshot from Facebook, after I clicked and dragged to the right: 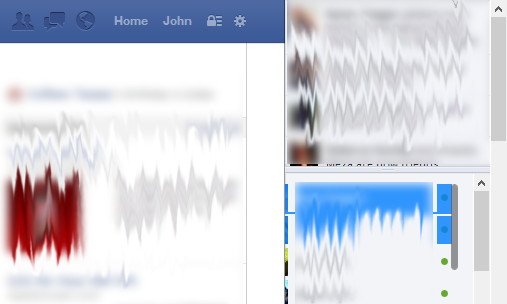 I searched StackOverflow to see if there were any fixes to the clicking and dragging issue.  I found a JavaScript solution that seemed to work, but it was kind of hacky.  Essentially, you bind to the scroll event for your element and set the scrollLeft to 0 every time the scroll event fires.  That seems to work, but if the browser lags at all, it can look glitchy.  I continued searching for a better solution.

One solution I found recommended setting:

Then I thought: what if instead of covering the scrollbars with a containing element, I used an ::after element to just put a white box overtop of the scrollbar?  That seemed to work, but it required that I knew how wide the scrollbar was.  After a little tweaking, I found a way to create an element that was just as wide as a scrollbar and covered the existing scrollbar.  Essentially, what I did was create an element that was nothing but a vertical scrollbar.  Then I put an ::after element on that that covered it with a solid color.  Finally, I moved the whole piece overtop of the existing scrollbar.  This method was pretty simple, but it still left a lot to be desired.  What if I didn't want the extra white space to the right of my scrollable element?  I continued searching for a better solution...

Next, I tried to see if there would be some hacky way to hide scrollbars in Firefox.  I could already hide them in Chrome, Safari, and IE, so Firefox was the last remaining puzzle piece.  I stumbled upon the -moz-appearance CSS property and tried a number of options.  One thing that almost worked was:

This removed the scrollbars from the element, but unfortunately, it also restricted the width and height of my element.  I couldn't find any way to change the size.  After many hours, I gave up on hiding scrollbars in Firefox.

Then another idea came to mind.  What if the used the transform property of CSS to mess with the scrollbars somehow?  The transform property affects everything in the element, including the scrollbars!  I decided that the scale option would be my best bet.  What I ended up doing was scaling the x axis of the scrollbar element by a factor of about 0.001.  This made the scrollbar so thin that it disappeared.  Then, I wrapped the text content in another element and scaled the x axis of that element by a factor of 1000.  That seemed to work!  However, text highlighting was glitchy in Firefox with this approach.

Then, I found that I could set position: absolute; and right: 0; and it would move the scrollbar out of view without having to know the width.  That solution worked well in all browsers but IE.  For some reason, when the scrollbar gets reversed, IE removes the margin between the text and the scrollbar.  What ended up happening was that the left side of the text was getting chopped off.  So then I added a Webkit-specific rule to reverse the scrollbars only when the user was using a Webkit browser.  This solution worked in all browsers and can be seen here.

But then I got to thinking... wait a minute, why not just hide the scrollbar for Webkit browsers and use the overflow: hidden; solution for all other browsers?  But of course!  How simple!   I did make some changes to the original overflow: hidden; solution, however.  I set the desired width on both the element that contains the text and the outermost container.  Then I set position: absolute; and left: 0; on the text element so that the scrollbar would be out of view.  This approach doesn't need to know the width of the scrollbar ahead of time in order to work.  That solution works for all browsers too, and can be seen here.

And here is the full code:

I hope this helps someone!  Enjoy :)