NOTE: This post was updated on Nov 12 2015 to incorporate breaking changes introduced in the Azure PowerShell 1.0 release.

In our introductory blog post we covered the overall Key Vault model. Today we’re going to dive into the specifics of using it. If you’ve not read the prior post, please do so before proceeding with this one. In the below Sumedh and Amit, PMs on the Key Vault Team, will offer a guided walk through with far more depth.

Thanks for your support!

Dan (twitter) on behalf of the Azure Key Vault Team

Here is the Azure page: https://azure.microsoft.com/services/key-vault

We value your input so please take a moment to follow us , join our advisory board , send us private feedback ,and/or visit our forum

In this post we take you through how to create and manage a key vault. We start with the lifecycle of a key vault. Next, we illustrate it with a basic example with PowerShell. Finally we wrap up by showing how to use these building blocks to achieve the full scenario that Dan outlined in the previous post.

During this preview, the management interface for a key vault is Azure PowerShell. In this post, we will assume you have basic working knowledge of PowerShell. If you do not, you should still be able to follow the overall flow from the example below, even if not every detail.

In the simplest case you create a key vault, and you are the only person doing all operations with the key vault. In other cases, there may be up to four sets of people and any number of applications performing different tasks on a key vault. We'll demonstrate here the four core roles that we've enabled:

1. Your usage of the Key Vault service begins with creating your own key vault. Do this using the cmdlet New-AzureRmKeyVault.

2. In all likelihood you created this key vault for one or more applications to use. You must register those applications in Azure Active Directory. You must also authorize them to use your vault. Do this using the cmdlet Set-AzureRmKeyVaultAccessPolicy.

Optional: To allow other users (say your team members) to add/remove keys to this key vault, authorize those users for those specific operations on your key vault. Do this also using the cmdlet Set-AzureRmKeyVaultAccessPolicy.

3. You, or the users you authorized, then add your secrets (e.g. passwords) and cryptographic keys to that key vault. Do this using the cmdlets Set-AzureKeyVaultSecret and Add-AzureKeyVaultKey respectively. For each secret or key that you add, you get a unique URI.

5. Subsequently the application you authorized can use your key vault programmatically using the Key Vault REST API or Key Vault Client classes. The application can do the following:

6. (Coming soon) You, the key vault owner, or a delegate such as an auditor, will be able to monitor operations performed on your keys and secrets by retrieving a usage log from the Key Vault service.

10. When you are done using the key vault, delete the entire key vault using the cmdlet Remove-AzureRmKeyvault.

The next section walks you through an example of these steps with screenshots.

This example shows a developer Derick at Trey Research creating a key vault, adding a key to that key vault, and running the sample application HelloKeyVault with that key vault. Derick is using the account his organization gave him (derick@treycorpusa.onmicrosoft.com) and he has a 30-day trial subscription to Azure, good enough to play with Azure.

Get an identity for the application

First things first -- everybody who uses key vaults, whether users or applications, needs to be registered in Azure Active Directory (Azure AD). Derick’s user account is already in Azure AD. But his application is not. So he registers his instance of the HelloKeyVault sample application in his organization's (treycorpusa.onmicrosoft.com) Azure AD directory . The next few screenshots show the standard application registration workflow for Azure AD. None of these steps are unique to Azure Key Vault.

Derick signs in to the Azure management portal, and selects ACTIVE DIRECTORY on the left. 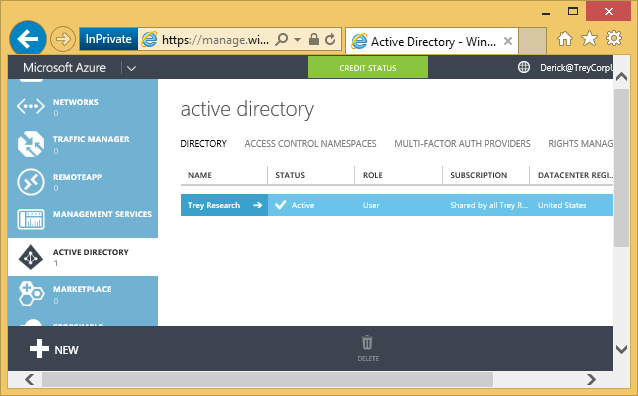 He sees his organization’s directory, “Trey Corporation”. He clicks it. In that directory, he clicks the APPLICATIONS tab. 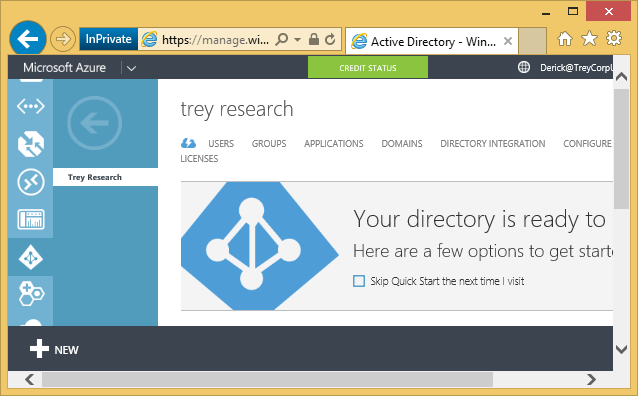 This page normally shows him the applications he has previously registered. In this case he has none. He clicks the ADD icon at the bottom. 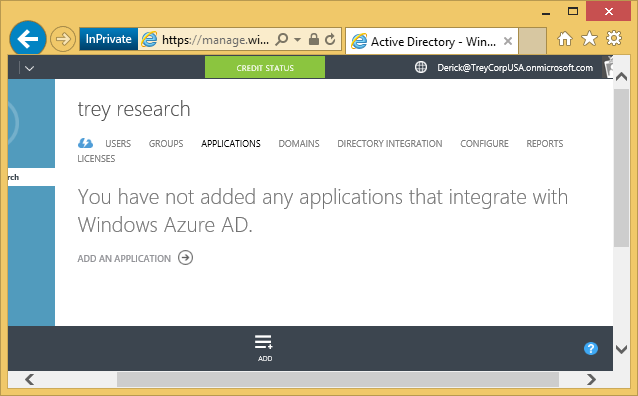 In the dialog that comes up, he enters a name for his application 'DerickHelloKeyVault' and chooses the type WEB APPLICATION. He clicks the arrow at the bottom to go to the next screen. 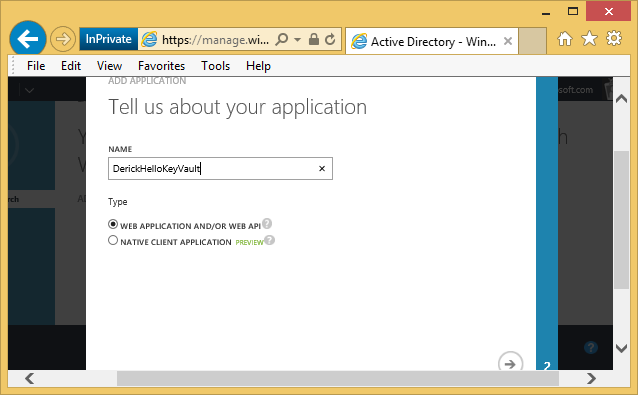 It asks him for a couple of URIs. The sign-on URI is relevant if the application has a sign-on page for users. This sample application does not have one, so we can enter any value there. In the App ID URI, Derick enters a URI that is unique within his organization. The corresponding site does not need to exist, the URI is just a label that uniquely identifies the application in the organization’s directory. 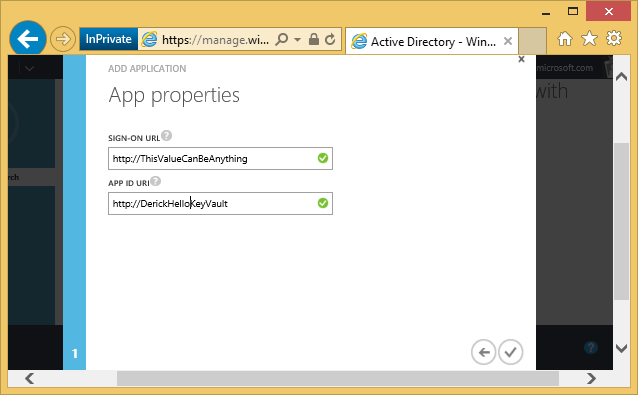 Now that the application is added, he goes to the CONFIGURE TAB.

He scrolls down to find the application’s CLIENT ID, also known as App ID. He notes this down. 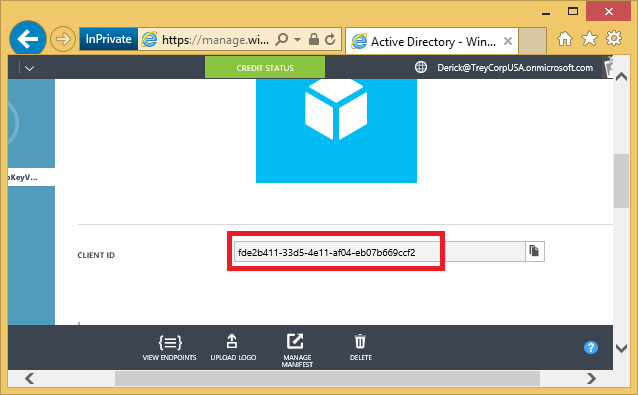 He also creates a new client secret that will be used by the application as a credential to sign in to Azure AD. In the portal this secret is called ‘keys’ – this has no relation to key vaults! He chooses an expiry of one year, clicks SAVE at the bottom. He notes down the generated secret, highlighted in the screen below.

At this point he has an identity and a credential for his application.

Create and configure a key vault

Let’s get back to key vaults. During this preview, the management interface to Azure Key Vault is Azure PowerShell. Derick installs the latest Azure PowerShell (1.0.1 or higher). He signs in, using the cmdlet Login-AzureRmAccount.

All Azure resources created via the Azure Resource Manager must be contained in resource groups. So Derick creates a new resource group called DerickDevRG to house the key vault he is going to create next.

Derick can authorize other users and applications. In this case he has created the key vault for himself, so he does not need to authorize any other users. He does need to authorize the instance of the HelloKeyVault application that he just registered in Azure AD. He does this as shown next. In the ServicePrincipalName parameter, he passes in the CLIENT ID that he noted down when registering the application in Azure AD. He grants this application permission to encrypt, decrypt, wrap, and unwrap with keys in the key vault. The Set-AzureRmKeyVaultAccessPolicy cmdlet runs silently (no output) if it runs successfully. Derick runs the 'Get-AzureRmKeyVault' command to confirm permissions.

Derick sees two sets of permissions. The first is for himself. The second is for his application, "DerickHelloKeyVault".

He downloads the Hello Key Vault sample application. In the app.config file he adds the URI of his key vault, and the CLIENT ID and secret that he noted down when he registered his application in Azure AD. He then compiles the application.

He runs the application. He specifies parameters ‘encrypt’ and ‘decrypt’. Doing this makes the Hello Key Vault execute only those operations against the vault. The application signs in to Azure AD, then uses that token to authenticate to Azure Key Vault.

Now that you have seen the basic flow, let’s use the building blocks to stitch together the real-world business problem mentioned in the first post in this blog. In that scenario, Contoso discovered that their LOB application is not as secure as they thought. They decided to move all keys into a key vault, instead of being packaged with the application. Contoso outsources all development.

When the outsourced developers build and test the application, they follow exactly the steps shown above for Derick. They do this with subscriptions belonging to them. They register (the test instances of) their application in their own Azure AD tenant.

If this test drive succeeds, they decide to move the application to production. The difference in this step is:

He authorizes the app. To keep this example simple, we show him authorizing Derick's instance of the app. In reality Cecil will insist on a new deployment in a subscription that is tightly controlled.

We showed the basic flow of creating a key vault, adding keys, and authorizing applications to use those keys. In an upcoming blog post, Sunil will show how to build on this to enable Transparent Data Encryption in SQL Server with keys in a key vault.

Keep watching this blog space. We will share updates as they come along.

We are looking forward to your feedback. Please take a moment to send us feedback and to join our advisory board. Your feedback is key (pun intended!) to making this service meet your needs in Azure!

Sumedh and Amit on behalf of the Azure Key Vault team.