One of the more common questions I get is about the architecture of an Azure role and which processes are responsible for the various steps in getting an Azure role instance up and running, how they interact, etc. This blog post will attempt to give a good overview of the major steps that happen when deploying a service, and the core processes that run on an Azure VM. 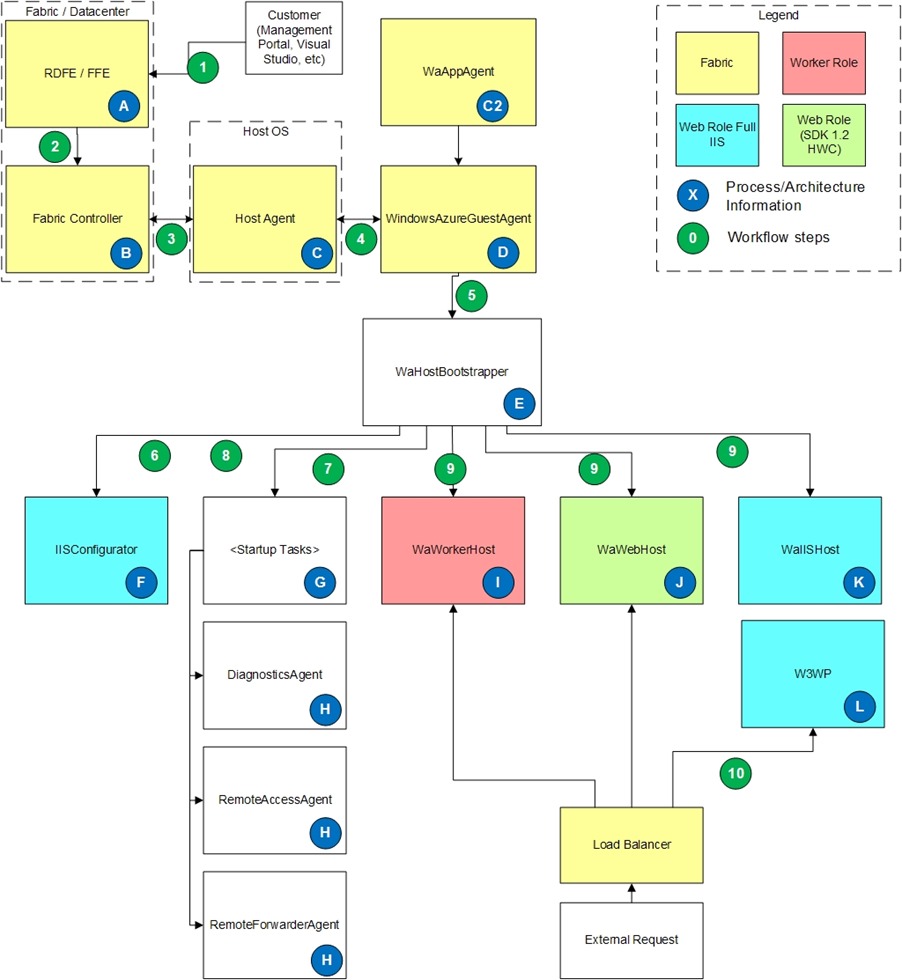 B. Fabric controller is responsible for maintaining and monitoring all of the resources in the data center. It communicates with fabric host agents on the fabric OS sending information such as the Guest OS version, service package, service configuration, service state, etc.

C. Host Agent lives on the Host OS and is responsible for setting up Guest OS and communicating with Guest Agent (WindowsAzureGuestAgent) in order to drive the role towards goal state and to do heartbeat checks with the guest agent. If host agent does not receive heartbeat response for 10 minutes, host agent will restart the guest OS.

C2. WaAppAgent is responsible for installing, configuring, and updating WindowsAzureGuestAgent.exe.

D. WindowsAzureGustAgent is responsible for:

b. Setting up the SID for the user account which the role will run under.

d. Starting WaHostBootstrapper and monitoring it to ensure role is in goal state.

E. WaHostBootstrapper is responsible for:

a. Reading the role configuration and starting up all of the appropriate tasks and processes to configure and run the role.

b. Monitoring all of its child processes.

c. Raising the StatusCheck event on the role host process.

F. IISConfigurator runs when the role is configured as a Full IIS web role (it will not run for SDK 1.2 HWC roles). It is responsible for:

a. Starting the standard IIS services

c. Setting up the AppPool for the <Sites> configured in the service model.

d. Setting up IIS logging to point to the DiagnosticStore LocalStorage folder

f. The website resides in %roleroot%:\sitesroot\0 and the apppool is pointed to this location to run IIS.

I. WaWorkerHost is the standard host process for normal worker roles. This host process will host all of the role’s DLLs and entry point code such as OnStart and Run.

J. WaWebHost is the standard host process for web roles when they are configured to use the SDK 1.2 compatible Hostable Web Core (HWC). Roles can enable the HWC mode by removing the <Sites> element from the service definition (.csdef). In this mode all of the service’s code and DLLs run from the WaWebHost process. IIS (w3wp) is not used and there are no AppPools configured in IIS Manager because IIS is hosted inside of WaWebHost.exe.

K. WaIISHost is the host process for role entry point code for web roles using Full IIS. This process will load the first DLL found which implements the RoleEntryPoint class (this DLL is defined in E:\__entrypoint.txt) and execute the code from this class (OnStart, Run, OnStop). Any RoleEnvironment events (ie. StatusCheck, Changed, etc) created in the RoleEntryPoint class will be raised in this process.

L. W3WP is the standard IIS worker process which will be used when the role is configured to use Full IIS. This will run the AppPool configured from IISConfigurator. Any RoleEnvironment events (ie. StatusCheck, Changed, etc) created here will be raised in this process. Note that RoleEnvironment events will fire in both locations (WaIISHost and w3wp.exe) if you subscribe to events from both processes.

1. Customer makes a request such as uploading a .cspkg and .cscfg, telling a role to stop, doing a configuration change, etc. This can be done through the Azure Management portal or via a tool that uses the Service Management API such as Visual Studio’s Publish feature. This request goes to RDFE which does all of the subscription related work and then communicates the request to FFE. The rest of these workflow steps will assume the process of deploying a new package and starting it.

2. FFE finds the correct machine pool (based on customer input such as affinity group or geo location, and input from fabric such as machine availability) and communicates with the master fabric controller in that machine pool.

4. The host agent starts the Guest OS and communicates with the guest agent (WindowsAzureGuestAgent). The host sends heartbeats to the guest to make sure that the role is working towards its goal state.

6. For Full IIS web roles, WaHostBootstrapper starts IISConfigurator and tells it to delete any existing AppPools for the webrole from IIS.

8. For Full IIS web roles, WaHostBootstrapper tells IISConfigurator to configure the IIS AppPool and points the site to E:\Sitesroot\<index> where <index> is a 0 based index into the number of <Sites> elements defined for the service.

9. WaHostBootstrapper will start the host process depending on the role type:

a. Worker Role: WaWorkerHost.exe is started. WaHostBootstrapper executes the OnStart() method, and once it returns it starts to execute the Run() method and simultaneously marks the role as Ready and puts it into the load balancer rotation (if InputEndpoints are defined). WaHostBootsrapper will then go into a loop of checking the role status.

b. SDK 1.2 HWC Web Role: WaWebHost is started. WaHostBootstrapper executes the OnStart() method, and once it returns it starts to execute the Run() method and simultaneously marks the role as Ready and puts it into the load balancer rotation. WaWebHost issues a warmup request (GET /do.__rd_runtime_init__). All web requests are sent to WaWebHost.exe. WaHostBootsrapper will then go into a loop of checking the role status.

c. Full IIS Web Role: WaIISHost is started. WaHostBootstrapper executes the OnStart() method, and once it returns it starts to execute the Run() method and simultaneously marks the role as Ready and puts it into the load balancer rotation. WaHostBootsrapper will then go into a loop of checking the role status.

10. Incoming web requests to a Full IIS web role will trigger IIS to start the W3WP process and serve the request just like it would in an on-prem IIS environment.