This blog series has been broken into several parts, in which I describe my experiences and go deep into the reasons behind my choices. In Part 1, I discussed the pros and cons of different symbolic frameworks, and my reasons for choosing Theano (with Lasagne) as my platform of choice. In Part 2, I described Deep Convolutional Neural Networks (DCNN) and how transfer learning and fine-tuning improves the training process for domain-specific images. Part 3 of this blog series is based on my talk at PAPI 2016. In this blog post, I show the reusability of trained DCNN model by combining it with a Long Short-Term Memory (LSTM) Recurrent Neural Network (RNN). We apply the model on ACS fashion images and generate captions for these images. Part 4 of this series extends the work of Part 3 to retrieve the most similar clothes images.

Content Based Image Retrieval (CBIR) is the field of representing, organizing, and searching images based on their content rather than image annotations. Here we work on the retrieval of images based not on keywords or annotations but on features extracted directly from the image data.

Given the role of apparel in society, CBIR of fashion images has many applications. In the previous blog post, we used an ImageNet pre-trained GoogLeNet model for transfer learning and fine-tuning and extracting CNN features from the ACS fashion image dataset. Then we used the CNN features to train a LSTM RNN model for the ACS Tag prediction. In this blog post, we change our model a little - instead of forwarding the re-trained image features to LSTM RNN, we try CIBR of these fashion images.

In this work, we use the ACS dataset as before. ACS dataset is a complete pipeline for recognizing and classifying people’s clothing in natural scenes. This has several interesting applications, including e-commerce, event and activity recognition, online advertising, etc. The stages of the pipeline combine several state-of-the-art building blocks such as upper body detectors, various feature channels, and visual attributes. ACS defines 15 clothing classes and introduces a benchmark dataset for the clothing classification task consisting of over 80,000 images, which is publicly available. We use the ACS dataset to create a model to retrieve most similar clothes images.

The GoogLeNet model that we use here was initially trained on ImageNet. The ImageNet dataset contains about one million natural images and 1,000 labels/categories. In contrast, our labeled ACS dataset has about 80,000 domain-specific fashion images and 15 labels/ categories. The ACS dataset is insufficient to train a network as complex as GoogLeNet. Thus, we use weights from the ImageNet-trained GoogLeNet model. We fine-tune all the layers of the pre-trained GoogLeNet model by continuing the back-propagation.

Once we have fine-tuned and retrained the pre-trained DCNN on the ACS image dataset, we follow the below steps:

We pass sample test images to the scoring function and it plots the three images most similar to the test image [Figure 3].

As we have retrained our model on ACS fashion images, the model focus is on clothes in the images. So even if we pass a test image of a human wearing a scarf (as below), the human is ignored, and the model retrieves similar images based on the focus area (e.g., images with most similar scarves).

Here we present an exciting implementation of content-based image retrieval. We believe that the CBIR field will see exponential growth, with the focus being more on application-oriented, domain-specific work, generating considerable impact in day-to-day life. 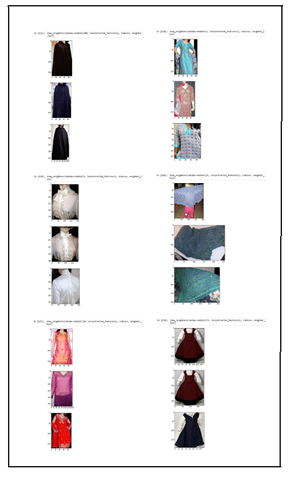