With the availability of ultra-fast GPUs (Graphics Processing Units), compute-intensive deep learning algorithms are becoming increasingly popular. Deep learning algorithms are particularly versatile at deriving insights from large amounts of information across rich formats such as text, audio, video and more, thereby bringing cognitive intelligence to core business and consumer applications. Deep learning is also becoming more accessible to data scientists and software engineers through new frameworks that provide a clean abstraction to build deep neural network models and consume them easily.
Caffe has been one such early and popular open source deep learning framework. It has now been rewritten and greatly improved in the latest iteration, named Caffe2. Facebook created Caffe2 by rewriting and improving upon Caffe. Caffe2 is built with expression, speed and modularity in mind. Another benefit of Caffe2 is its support for the consumption of the deep learning models from a wide variety of platforms including mobile devices, thereby bringing the power of AI to devices with relatively modest resources. Microsoft and Facebook have worked together to bring Caffe2 to Azure on the Data Science Virtual Machine (DSVM) which can run on either GPU or CPU based virtual machines on the cloud.

Microsoft has offered the Data Science Virtual Machine on the Azure marketplace in both Windows and Linux editions. For nearly a year and a half, DSVM has been a very popular tool among data scientists, engineers and business intelligence professionals alike, and across a broad range of organizations. DSVM provides a host of popular tools for machine learning and data science, These tools are pre-installed and pre-configured, allowing users to focus more of their time on the analytics and data science work, and not on mundane IT tasks such as the installation or configuration of software. Since the DSVM runs on Azure, you automatically get the benefit of the cloud with respect to scaling up and down as per your needs, saving time from having to manage the infrastructure, and giving you redundancy and distribution across data centers around the globe, security and the ability to pay for just what you use.

Our new release of the DSVM, which for the first time is offered on the Ubuntu Linux distribution, has been enhanced to combine the best data science and machine learning tools we have offered in the past with the most popular deep learning and AI tools in a single VM. We are happy to be an early cloud partner for Caffe2. This will help users build deep learning models on the powerful Nvidia K80 based GPU hardware on Azure, reuse prebuilt models from the community and consume them closer to the source of the data, be it from enterprise applications running on the cloud, on-premises, desktop or mobile applications. In addition to pre-installing and configuring Caffe2 on the DSVM, we also provide a few example Jupyter notebooks to help you get started quickly.

Creating your DSVM is simple. Just visit the product page at: https://aka.ms/dsvm/ubuntu and click the "Get it Now" button. Within about 5 minutes you will have your ready to use instance of the DSVM with all the pre-installed tools. 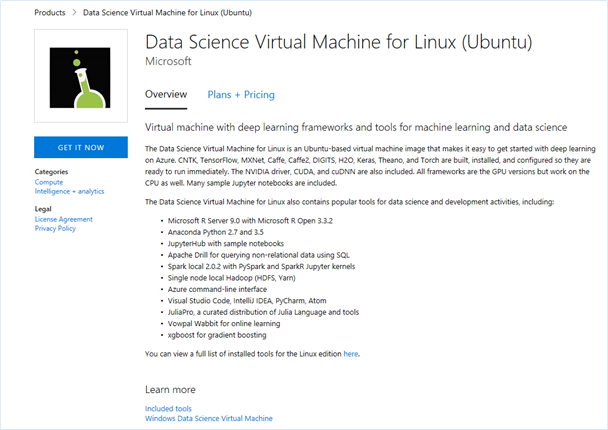 We believe that the Data Science Virtual Machine, with its broad choice of built-in deep learning and machine learning tools, and utilities to access and explore data from a variety of sources, saves you time from having to curate, install and maintain software, helps you get started from examples, allows you to run rapid experiments and develop production-ready models and applications that you can then deploy on the cloud or on-premises.

We invite you to try the Data Science Virtual Machine for your deep learning and AI needs, whether you're just getting started or a seasoned expert. Free Azure trials are available, giving you $200 in free credits for a period of 30 days.