How Microsoft is Helping Conservationists Protect The Masai Giraffe

The Masai giraffe is facing a troubling future. Because of habitat loss, illegal hunting and disease, the population of wild giraffes in Africa has declined to only 80,000. Scientists from the Wild Nature Institute are studying where the giraffe population is doing well and where they are faring poorly.  By studying and understanding the natural and human-caused factors that affect giraffe survival, reproduction and movements, scientists can determine which conservation actions best protect giraffe populations.

Wild Nature Institute is currently conducting one of the largest individual-based demographic studies of large mammal ever undertaken. To study the reproduction, survival, and movements of the giraffe population, the research team must photograph thousands of giraffes. Scientists at the Wild Nature Institute can identify an individual giraffe in a photograph using a computer program that recognizes each animal’s unique spot pattern (think fingerprint recognition for giraffe). Using a close-up, cropped image of the giraffe torso, the program matches photos against a database of known giraffe that the team has previously encountered. Using this technique, the scientists monitor seasonal survival, reproduction, and movements of over 2000 different individual giraffe around the Tarangire Ecosystem of Tanzania. 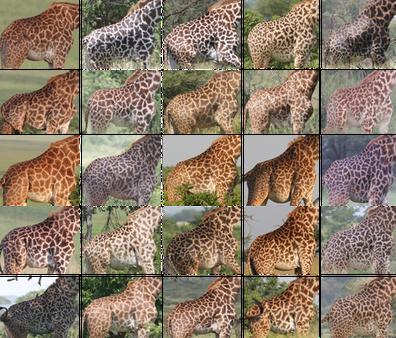 However, the analysis process is very manually intensive and time-consuming. Many thousands of photos have to be processed per year, and for every photo the giraffe body in the image has to be manually cropped. To improve this process, Microsoft scientists have provided a new image processing service to automate the process using machine learning technology deployed on the Microsoft Azure cloud.

Using an object detection algorithm, the Microsoft team trained a model to recognize giraffe torsos using the existing annotated giraffe data. The model was iteratively improved using an efficient Active Learning process, where the system identified new, difficult-to-predict images and showed its predictions on these images to a human who could quickly verify or correct the results. These new images were then fed back into training algorithm to further update and improve the model.  The resulting system identifies the location of giraffe torsos in images with a very high accuracy, as can be seen in the example results in the images below.

The new system dramatically speeds up the important research being performed by the Wild Nature Institute scientists. "It is wonderful how the Azure team automated this tedious aspect of our work," said Dr. Derek Lee, Principal Scientist and CEO at Wild Nature Institute. "It used to take us a week to process our new images after a survey, now it is done in minutes!"

To learn more about the big data and advanced analytics capabilities available from Microsoft, including machine learning, visit the sites for the Microsoft Cortana Intelligence Suite and Microsoft Cognitive Services.