Yesterday, as I walked from the dark parking garage to begin my day of work, I remembered that we were celebrating MacBU's 10th anniversary! The clouds were thinning and I looked around to see if perchance, the cloudy weather would abate, even a little bit for our big party. As I looked up I saw this:

Thrilled, I just had to find out who had created such a master piece of pixel art. I've tried my hand at building stuff like this, but the quality of this work was simply fantastic. I soon discovered that Joe LeBlanc, the very same that helped me earlier with my pixelated Apple logo and famous for the G4 Cube aquarium, was the mastermind behind the window decorations and birthday gift to MacBU. Joe along with Jessica Lambert and Matt Elggren (aka Mel) had arrived at our building at 6 AM in order to set this up, but the project was much more work than what happened this morning, so I took my trusty MacBook Pro and donned my reporter hat to interview all three about what it was like to do this, behind the scenes. What follows is the verbatim transcript of the interview.

David Weiss: What prompted you to do this?

Joe LeBlanc: I just wanted to give all of MacBU a gift, from my heart.

David: What time did you get here?

Mel: You know, you do what you got to do.

David: How did you design it?

Joe: In Excel of course. (Editorial Note: Joe is on the Excel Test team.)

David: They really look great. So how did you start?

Joe: Well, I had the idea in January. I had seen other game themed block art before, I thought we could do it. I took our icons, scaled them down in Photoshop, then reduced the colors and made them blocky. I manually adjusted the blocks for inconsistencies and then brought them over to Excel.

David: Excel? How did you use Excel?

Joe: Easy. After having measured the windows and the size of the stickies,

David: What? Those are all stickies?

Joe: 1336, actually. I used the COUNTIF function in Excel.

David: The wow is now! That's amazing! So what about Excel? How did you use Excel to design the presentation?

Joe: First I used conditional formatting, 1 being black, 0 being white to match what was sketched out in the Photoshop image. Then I realized I needed to flip it horizontally so it looked right from the outside of the building, so I switched the top corners, then used auto-fill from the outsides in, then top down.

David: I'm stunned. What next?

Joe: I did this for each of the icons, then the numbers, which I used Ariel, because it looked the best as a 13pt non-antialiased font. Then I formatted to print 1 icon for each page as a guide for each person. We had 3 people, so we each did 2 icons then helped each other finish the numbers. 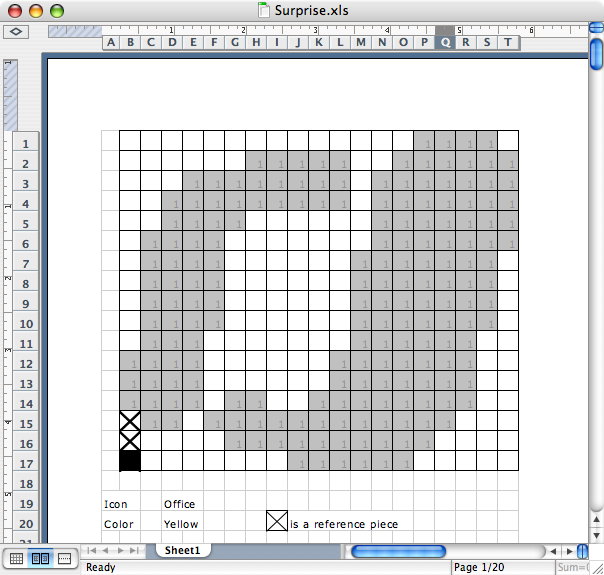 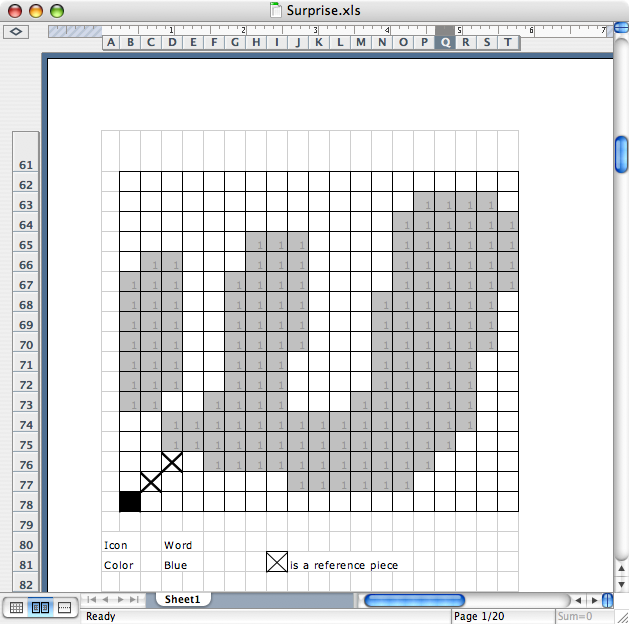 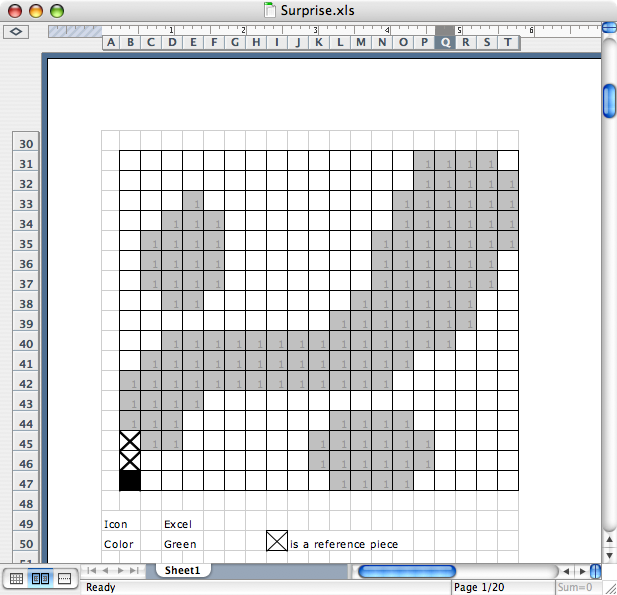 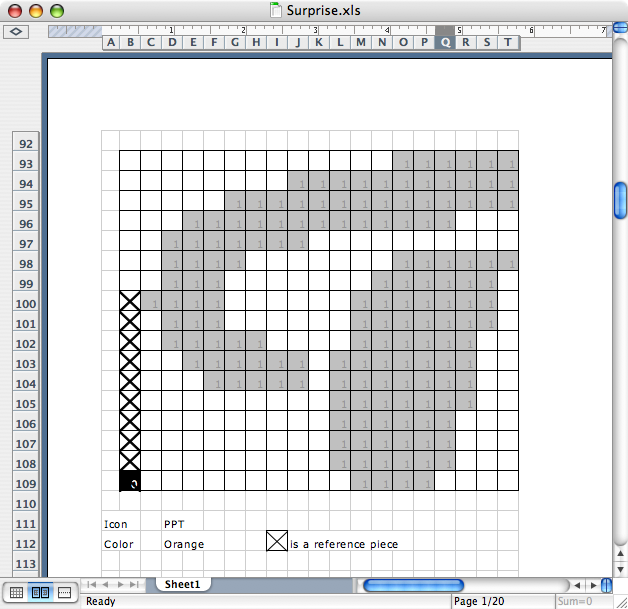 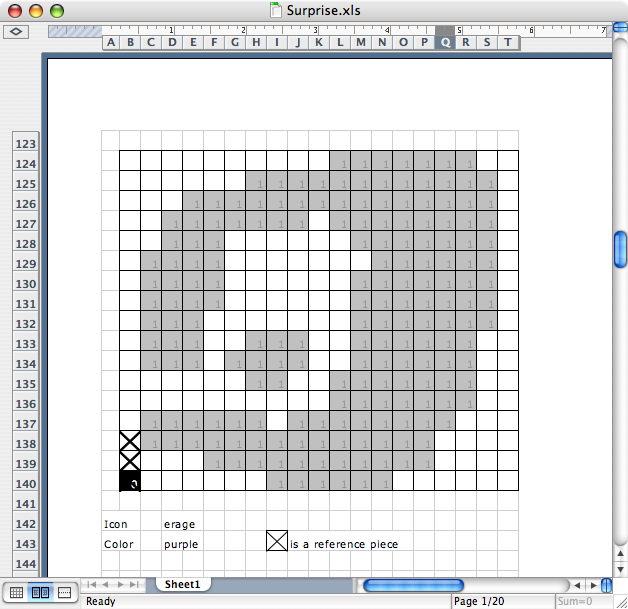 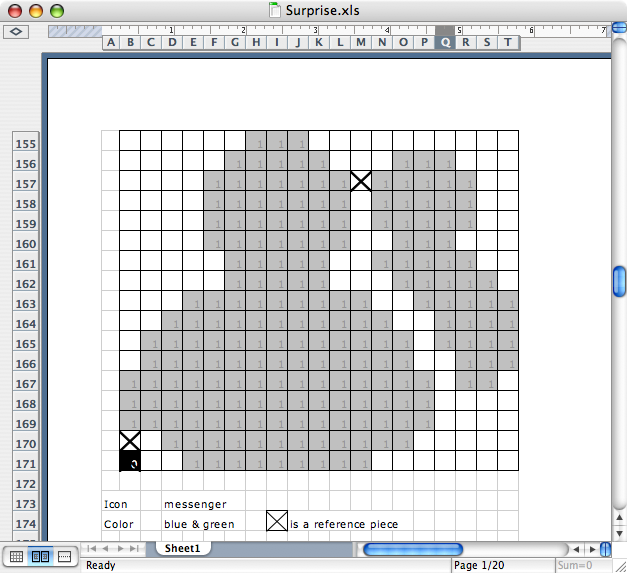 David: Can others try this?

Joe: Sure, just use the Excel screenshots as your guide and send us a link to a picture of your icon art!

David: Using stickies for internal marketing seems remarkably fiscally responsible. Was that part of your thinking?

Joe: Naturally we try to make the best use of our resources at hand.

David: Mel, how do you feel about this experience?

Mel: I was just happy to be along for the ride. It was a thrill! I was up until 1 AM. I couldn't sleep because of the excitement! I always wanted to know what it was like to be a video card, and well, now I know.

David: Jessica, what was the hardest part of all this?

Jessica: Getting up in the morning! I was here at 6 AM. That's early! We got here and I couldn't believe there were other people awake this early! Seriously, I'm short, so I was using a chair and I fell of it. But I'm okay.

David: No workman's comp claims in the wings?

Jessica: Oh no, I'm just fine. So beside the vertical challenges, it was hard to keep everything in a straight line. After doing a few icons, we went outside to see how it looked and we had to raise my icons a pixel, but that wasn't too hard, just took one from the bottom and moved it to the top.

David: Joe, as the master mind behind all this, were you nervous?

Joe: Actually, I had a nightmare that I showed up late and the guys that were here to help me were William H. Macy and the guy that plays Mac in the Mac vs. PC commercials. Mr. Macy was just being a jerk and messing up everything and it ended up in complete disaster. Then I woke up. I felt good knowing that the worst possible outcome had already happened in my dreams, so I knew it would go well.

David: Okay. So, what was it like working early in the morning?

Joe: It was interesting. Some folks got here while we were not yet finished and would look up at us working on the icons and just smile. Others would just look down at the ground and not even notice. When we were outside taking pictures and making sure it looked pixel perfect, some people would ask, "What's that?" and "I see a Messenger icon, but what's the other stuff?" Someone else asked "What is QWIPX?"

David: The MacBU shares the building with a bunch of Microsoft's main IT staff, what do you think they think about all this?

Joe: Well, I think they're used to it. I mean, they've had to see all our Think Different posters when they walk in each day. We get along just fine.

David: What was the biggest technical challenge?

Joe: Color was hard. We could find blue, yellow, green and pink stickies in the storage room, but we needed purple and orange for Entourage and PowerPoint. Jessica bought a couple of packages of purple and orange, but to get the right effect we had to dither the different colors in those logos. So color was a challenge, but I’d say keeping things straight was harder.

David: So what does the future hold?

Joe: I don't know. We are going to have to come up with something even cooler when we ship Office 2008.

Joe: Neither can I.