In my previous post, the focus of attention was our new Office 2008 User Experience.  For this post, I will turn the focus to another area that I am deeply passionate about --- Microsoft Word 2008.  At MacBU, many of us have the great fortune to work on multiple areas of interest. So when I’m not “pushing pixels” in our new Office UI, my other role is Lead Program Manager for Word for Mac.  Together with my passionate and dedicated  team, we’ve been hard at work on a feature that has been three years in the making.  With this new post, I am pleased to talk about one of our latest labors of love --- the new Publishing Layout View. 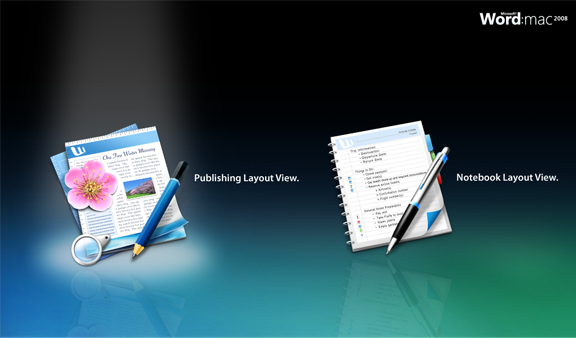 First, some background.  For those using Word for Mac, you may already be familiar with Notebook Layout View from Word 2004.   Notebook Layout View is a specialized notebook-like environment optimized for quick note-taking.  By adopting the appearance of the familiar spiral paper-based notebook --- with notebook tabs and rule lines --- you can quickly capture thoughts and information as you would in an actual paper-based notebook.  Notebook Layout View represented a new design philosophy in the development of Word for Mac.  The premise of this new approach was to present a minimalist and “task-based” user interface in which 90% of Word’s typical UI is hidden and only exposing features relevant to the task at hand, in this case note-taking.  Our customers have responded positively to this approach because the user interface is more approachable and less “bloated”, thereby making relevant features easier to find.  I’m pleased to say that we’ve further streamlined and improved this popular feature in Word 2008, but that’s a subject for another blog post.  :)

Now let’s fast-forward to Word 2008.  For years we have known that Word is used to create a wide spectrum of documents that fall under two basic categories:

Word has long provided a full complement of the features necessary for the creation of these two different categories of documents.  However, given that all of such features were presented all at once with a single “one-size-fits-all” user interface, users found it difficult to find the right features for the right task.

Our previous efforts with Notebook Layout View allowed us to gain valuable insight and experience in crafting specialized working environments.  By leveraging what we’ve learned from Word 2004, we set out to create Publishing Layout View --- a streamlined workspace optimized for creating professional layout-rich documents.   By stripping away all the unnecessary controls in this special environment, we are able to elevate our desktop publishing-caliber tools with a greater level of cohesion, all without adversely impacting how users work in the standard view of Word.   In this specialized environment, it's no coincidence that there is only one single horizontal toolbar, the Standard Toolbar --- in this case, less is more.  Also, the basic metaphor of entering text is also markedly different --- text is entered through floating Text Boxes that the user can feely position anywhere on the page (and even off the page).   No longer will text “get stuck” or “jump around” due to the properties of “inline text” --- which like the term itself --- is a mystery to anyone but the most advanced Word user.

In designing Publishing Layout View, we’ve taken a methodical approach to rethink how existing features work, and how to present them.  Again, let’s take the most basic element  --- the Text Box --- as an example.  While Text Boxes in Word have long offered users the ability to establish connecting “links” between individual Text Boxes, it was neither obvious how to create such links, nor was it easy to determine the relative order of a linked Text Box within a “chain”.    In Publishing Layout View, users can create a new linked Text Box directly from another Text Box.   Also, at the moment a link is created, all Text Boxes within the new “chain” will pulse just once with a subtle blue halo to denote that a link has been created across the affected Text Boxes.  When a link is broken, all Text Boxes within the chain will pulse with a subtle red halo to denote the chain has now been broken.

As shown above, to help users quickly identify the sequential ordering of linked Text Boxes within a document, we’ve provided a number badge that reveals the relative order when the mouse hovers over each Text Box.  Moreover, given that complex layout rich documents like newsletter and brochures can have multiple Text Box “chains” within a document, Text Boxes are given color coded outlines (upon hover over) to indicate which “chain” it belongs to.  These are just a few of the many new innovations we’ve added to Publishing Layout View.

What has made the creation of Publishing Layout View particularly exciting is that despite being the creators of the product, we are also target audiences ourselves.  My first encounter with the Mac was during my high school days and the Mac introduced me to the power of desktop publishing --- while this was many many moons ago, this encounter left a lasting imprint on me.  At the time, I was an editor-in-chief of one of my school’s student publications and I soon realized the amazing possibilities of desktop publishing even though the tools were still primitive compared to today’s standards.   Yet years later, while our customers have been aware of Word’s powerful capabilities, many have not been able to fully tap these features and other dedicated DTP applications remain too high-end or intimidating for the majority of users.  With Publishing Layout View, we were afforded with the exciting opportunity to go back to the drawing board and rethink how we could offer this powerful functionality with a more discoverable and intuitive user experience.

As noted earlier, by offering a specialized working environment, we can elevate our desktop publishing-caliber tools without affecting how Word looks and behaves in the standard view.  In Publishing Layout View only, the single Standard Toolbar features a special toolset containing the most commonly used commands and elements used for layout-rich documents.    Our popular Formatting Palette is also designed to expose advanced typographical features that have long lived in the depths of Word’s user interface, unknown to many users. 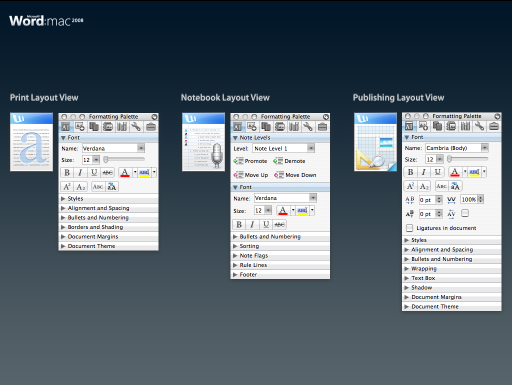 A new feature now accessible directly from Publisher Layout View’s Formatting Palette is the ability to turn on ligatures, allowing users to further tap the richness of many beautiful fonts on the Mac.  From the first time I was introduced to ligatures back when Macintosh Classics were all the rage to the world of Intel-based Macs today, in between there was an emotional moment when I saw the very first ligature display on the screen inside Word. 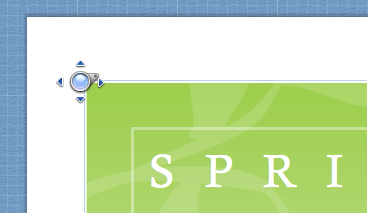 In Publishing Layout View, the keyboard combination of “Command + or –” now zooms in and zooms out as you would expect.  However, we’ve you’ll also notice a new “Zoom Loupe” Tool.   This is a new tool that allows you to target a specific area on the document, and then seamlessly zoom in and out with a single mouse movement.  As quickly zooming in and out is one of the most common actions performed when creating a layout rich document, the Zoom Loup is a small but useful innovation that I wish I had many years ago (besides wishing that I could also travel back in time). 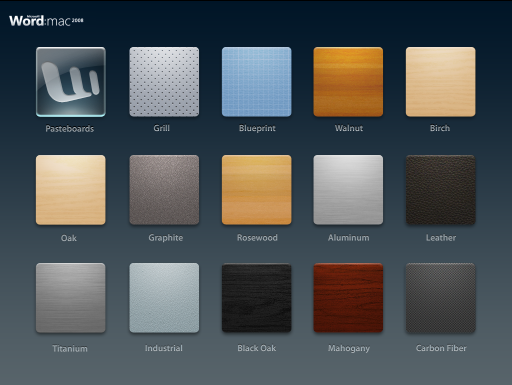 To capture the very essence of what is commonly referred to as “desktop publishing”, we also examined the concept of a “desktop” in the context of the overall workflow.  In Word, the content of a document lives on a page --- and this page is set on a background surface much like a piece of paper is set on an actual desk.  In Publishing Layout View, users can place layout elements such as text, pictures, and shapes on what we refer to as a “pasteboard” during the layout process.  Given that we also know that one’s workspace is often highly customized to one’s own tastes, we provide 14 different customizable pasteboards --- all of which reflect our aesthetic vision through high fidelity and photo-illustrative examples of real world materials.   These different pasteboards also ensure that there is sufficient visual distinction between “special-purpose” and “standard” Word views.

While there are a long list of noteworthy features, I would like to shift focus to the actual Publishing Layout View designer templates.   I believe that the output capabilities of a product can be better demonstrated by a collection of professionally created designer templates than a long bulleted feature list. 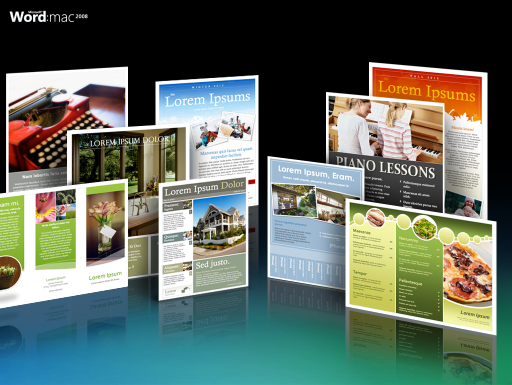 The planning and creating of designer templates started as early as product development started.  I have always maintained that instead of having the application drive template designs, it should be the other way around.  That is to say, let’s not develop the product first and then come up with a collection of templates as an afterthought.  Instead, we should start with a strong vision, understanding, and appreciation of what great output looks like, and then build the product and features that enable that vision.   If a feature is just added for the sake of adding features, but cannot be used in a meaningful or integrated manner during document creation, then it is of little value to the overall product, and most importantly, to our customers.   Also, with Office 2008, you will not find a “bajllion” new templates --- instead, our focus favors quality over quantity and our bar is higher than ever.

Two decades ago, the world saw the debut of the revolutionary product known as the Macintosh.  One of the hallmarks of the Macintosh was that it introduced us to a new world of “desktop publishing” which forever changed the typesetting and personal computer industries.  One of the overall pillars for Office 2008 is “great looking documents made easy” and Word 2008’s Publishing Layout View is a cornerstone of this effort.   I have found Word 2008 to be my new application of choice for layout-rich documents and it is my hope that you will find Publishing Layout View to be your new freeform canvas for your boundless creativity.