The Case of My Mom’s Broken Microsoft Security Essentials Installation

As a reader of this blog I suspect that you, like me, are the IT support staff for your family and friends. And I bet many of you performed system maintenance duties when you visited your family and friends during the recent holidays. Every time I’m visiting my mom, I typically spend a few minutes running Sysinternals Process Explorer and Autoruns, as well as the Control Panel’s Program Uninstall page, to clean the junk that’s somehow managed to accumulate since my last visit.

This holiday, though, I was faced with more than a regular checkup. My mom recently purchased a new PC, so as a result, I spent a frustrating hour removing the piles of crapware the OEM had loaded onto it (now I would recommend getting a Microsoft Signature PC, which are crapware-free). I say frustrating because of the time it took and because even otherwise simple applications were implemented as monstrosities with complex and lengthy uninstall procedures. Even the OEM’s warranty and help files were full-blown installations. Making matters worse, several of the craplets failed to uninstall successfully, either throwing error messages or leaving behind stray fragments that forced me to hunt them down and execute precision strikes.

As my cleaning was drawing to a close, I noticed that the antimalware the OEM had put on the PC had a 1-year license, after which she’d have to pay to continue service. With excellent free antimalware solutions on the market, there’s no reason for any consumer to pay for antimalware, so I promptly uninstalled it (which of course was a multistep process that took over 20 minutes and yielded several errors). I then headed to the Internet to download what I – not surprisingly given my affiliation - consider the best free antimalware solution, Microsoft Security Essentials (MSE). A couple of minutes later the setup program was downloaded and the installation wizard launched. After clicking through the first few pages it reported it was going to install MSE, but then immediately complained that an “error has prevented the Security Essentials setup wizard from completing successfully.”: 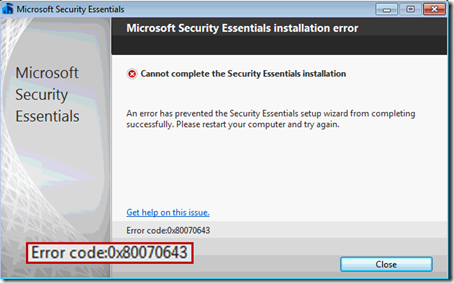 The suggestion to “restart your computer and try again” is intended to deal with failures caused by interference from an unfinished uninstall of existing antimalware (or a hope that whatever unexpected error condition caused the problem is transient). I’d just rebooted, so it didn’t apply. Clicking the “Get help on this issue” link provided some generic troubleshooting steps, like uninstalling other antimalware, ensuring that the Windows Installer service is configured and running (though by default it isn’t running on Windows 7 since it’s demand-start), and if all else fails, contacting customer support.

I suspected that whatever I’d run into was rare enough that customer support wouldn’t be able to help (and what would they say if they knew Mark Russinovich was calling for tech support?), especially when I found no help on the web for error code 0x80070643. My brother in law, who is also a programmer and tech support for his neighborhood was watching over my shoulder to pick up some tips, so the pressure was on to fix the problem. Out came my favorite troubleshooting tool, Sysinternals Process Monitor (remember, “when in doubt, run Process Monitor”).

I reran the MSE setup while capturing a trace with Process Monitor. Then I opened Process Monitor’s process tree view to find what processes were involved in the attempted install and identified Msiexec.exe (Windows Installer) and a few launcher processes. I also saw that Setup.exe launched Wermgr.exe, the Windows Error Reporting Manager, presumably to upload an error report to Microsoft:

I turned my attention back to the trace output and configured a filter that excluded everything but these processes of interest. Then I began the arduous job of working my way through tens of thousands of operations, hoping to find the needle in the haystack that revealed why the setup choked with error 0x80070643.

As I scanned quickly to get an overall view, I noticed some writes to log files:

However, the messages in them revealed nothing more than the cryptic error message shown in the dialog.

After a few minutes I decided I should work my way back from where in the trace operations the error occurred, so returned to the tree, selected Wermgr.exe, and clicked “Go to event”:

This would ideally be just after the setup encountered the fatal condition. Then I paged up in the trace, looking for clues. After several more minutes I noticed a pattern that accounted for almost all the operations up that point: Setup.exe was enumerating all the system’s installed applications. I determined that by observing it queried multiple installer-related registry locations, and I could see the names of the applications it found in the Details column for some of them. Here, for example, is one of the OEM’s programs, another help file-as-an-application, that I hadn’t bothered to uninstall:

I could now move quickly through the trace by scanning for application names. A minute later I stopped short, spotting something I shouldn’t have seen: “Microsoft Security Essentials”:

I knew I hadn’t seen it listed in the installed programs list in the Control Panel in my earlier uninstall-fest, which I confirmed by rechecking.

Why were there traces of MSE when it hadn’t been installed, and in fact wouldn’t install? I don’t know for sure, but after pondering this for a few minutes I came to the conclusion that the software my mother had used to transfer files and settings from her old system had copied parts of the MSE installation she had on the old PC. She likely had used whatever utility the OEM put on PC, but I would recommend using Windows Easy Transfer. But the reason didn’t really matter at this point, just getting MSE to install successfully, and I believed I had found the problem. I deleted the keys, reran the setup, and….hit the same error.

Not ready to give up, I captured another trace. Suspecting that setup was tripping on other fragments of the phantom installation, I searched for “security essentials” in the new trace and found another reference before the setup bailed. To avoid performing this step multiple more times, I went to the registry and performed the same search, deleting about two dozen other keys that had “security essentials” somewhere in them.

I held my breath and ran the installer again, but no go: 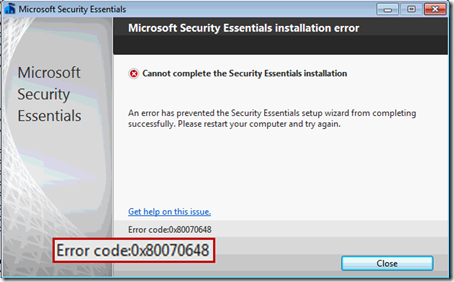 The error code was different so I had apparently made some progress, but a web search still didn’t yield any clues. I captured yet another trace and began pouring through the operations. The install made it way past the installed application enumeration, generating tens of thousands of more operations. I scanned back from where Wermgr.exe launched, but was quickly overwhelmed. I just couldn’t spot what had made it unhappy, and that was assuming that whatever it was would be visible in the trace. My brother-in-law was growing skeptical, but I told him I wasn’t done. I was motivated by the challenge as much as the fact that I couldn’t let him tell his work buddies that he’d watched me fail.

I decided I needed the guidance of a successful installation’s trace so that I could find where things went astray. When it’s an option, like it was here, side-by-side trace comparison is a powerful troubleshooting technique. I switched to my laptop, launched a Windows 7 virtual machine, and generated a trace of MSE’s successful installation on a clean system. I then copied the log from my mom’s computer and opened both traces in separate windows, one on the top of the screen and one on the bottom.

Scrolling through the traces in tandem, I was able to synchronize them simply by looking at the shapes that the operation paths make in the window and occasionally ensuring that they were indeed in sync by looking closely at a few operations. Though it was laborious, I progressed through the trace, at times losing sync but then gaining it back. One trace being from a clean system and the other with lots of software installed caused relatively minor differences I could discount.

Finally after about 10 minutes, I found an operation that differed in what seemed to be a significant way: an open of the registry key HKCR\Installer\UpgradeCodes\11BB99F8B7FD53D4398442FBBAEF050F returned SUCCESS in the failing trace:

but NAME NOT FOUND in the working one:

Another bit of the broken installation it seemed, but without any reference to MSE, so one that hadn’t shown up in my registry search. I deleted the key, and with some forced confidence told my brother-in-law that I had solved the problem. Then I crossed my fingers and launched the setup again, praying that it would work and I could get back to the holiday festivities that were in full swing downstairs.

Bingo, the setup chugged along for a few seconds and finished by congratulating me on my successful install: 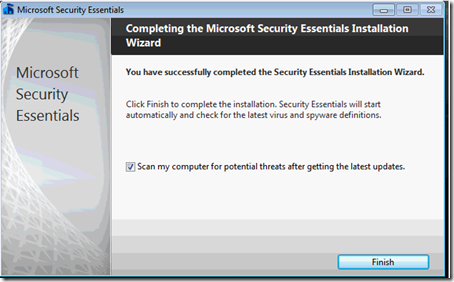 Another seemingly unsolvable problem conquered with Sysinternals, application of a few useful troubleshooting techniques, and some perseverance. My brother-in-law was suitably impressed and had a good story for when he returned to the office after the break, and my mother had a faster PC with free antimalware service.

I followed up with the MSE team and they are working on improving the error codes and making the setup program more robust against these kinds of issues. They also pointed me at some additional resources in case you happen to run into the same kind of problem. First, there’s a Microsoft support tool, MscSupportTool.exe, that extracts the MSE installation log files, which might give some additional information. There’s also a Microsoft ‘fix-it tool’ that addresses some installation corruption problems.

I hope that your holiday troubleshooting met with similar success and wish that your 2012 is free of computer problems!