In our last post, we discussed how to examine Media Foundation traces manually, using TextAnalysisTool.NET. This time, we present a few scripts to automate the process and identify problems more quickly.

First, install Perl, GraphViz, and Gnuplot. Then open a command prompt and add Gnuplot to your path. For example:

The exact path to Gnuplot on your machine might differ. The installers for Perl and GraphViz automatically add the path, so those two applications should already be in your path.

Next, download the following Perl scripts from MSDN Code Gallery:

The scripts in the download package have a .txt file extension. Rename them to have a .cmd extension.

In the following, we assume that a log file was captured using MFTrace and saved to .\mf.log. If you need a refresher on MFTrace, please refer to our previous posts and to MSDN.

Recall that Media Foundation takes various pipeline components (sources, decoders, sinks) and assembles them into a topology. It is hard to visualize a topology just by reading a trace log. A picture of a topology would be much easier to understand. That’s exactly what our first script does: It searches the log for traces that describe the topology, saves these in a format that GraphViz understands, and runs GraphViz to create an image.

Running the script is straightforward:

The script creates several images which represent the topology at different stages of topology resolution. The first topology is the input to the Media Session, and often looks like this: 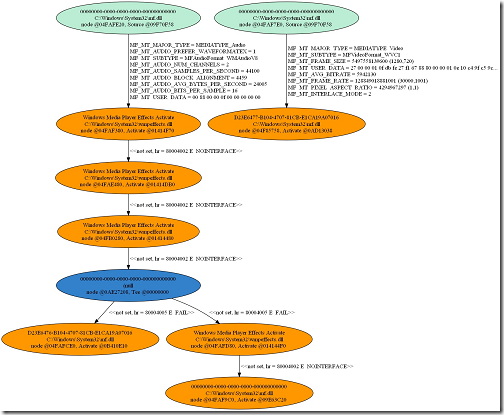 Each node represents a component of the topology. Media types shared by two connected components are displayed along the line of the connection.

The node colors have the following meaning: 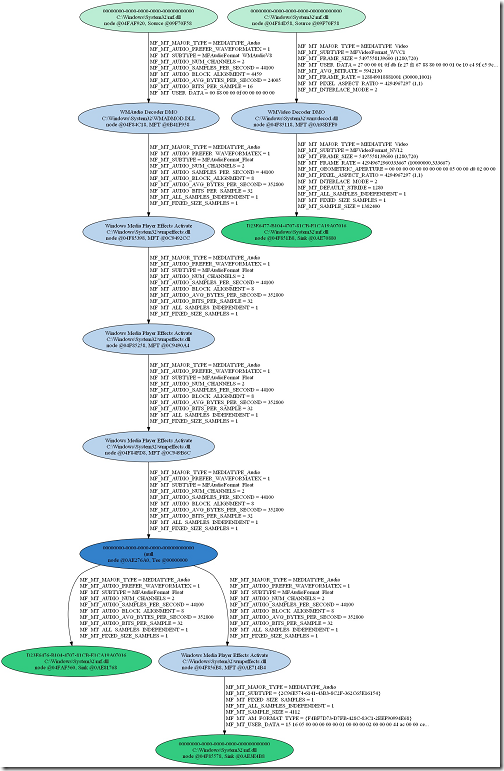 This topology represents the “ready” state. It contains two branches:

Just like topologies, time stamps are much simpler to analyze with some visual aid. This is what the second script creates, with the help of Gnuplot.

Again, running the script is straightforward:

For playback scenarios, the difference is usually more interesting, as it results in flat graphs when samples flow smoothly (i.e. real time). The “-absolute” option is geared toward transcoding scenarios, where you want the samples flow as fast as possible.

Here is an example of what you do not want to see in a playback scenario: two major glitches in an otherwise smooth playback. 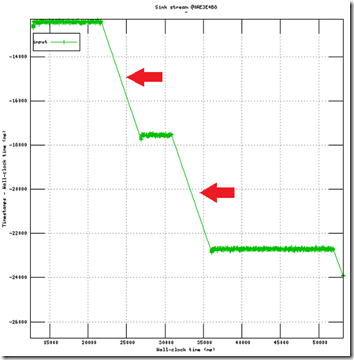 The script also prints a few statistics at the command prompt about the components in the topology. This can be useful to quickly determine whether some components were not generating samples as they should have.

Because MFTrace also captures some DirectShow traces, it is also possible to draw DirectShow graphs. Here is the graph for playing a WTV file. 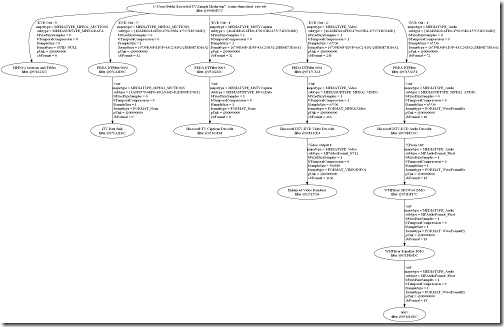 As you can see, WTV playback can be quite involved.

That’s all for now. Next time, we will see how to add custom traces from components or applications to the MFTrace logs. In the meantime, do not hesitate to post comments here, or questions on the Media Foundation forum.