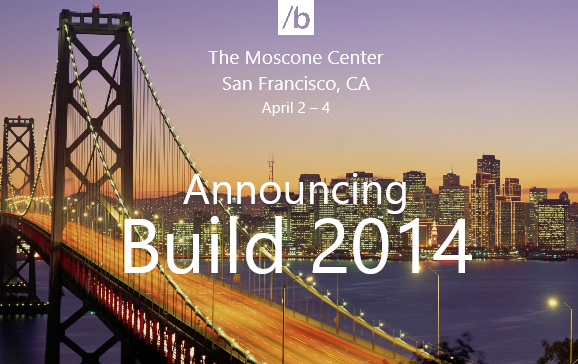 It seems like we were just gathered in San Francisco for Build 2013 and yet a lot has happened since that time. Windows 8.1 is in the hands of consumers and there is a great selection of new devices at all sizes and price points coming in time for the holidays. Last month, we released Xbox One and sold more than two million units in the first 18 days. And we continue to see the addition of great new apps, with differentiated user experiences, coming to the platform from top names such as Flipboard, Instagram, Waze, Vine and Mint alongside thousands of local apps growing every day.

The momentum just keeps building and that is why I’m so excited to announce our next developer conference, Build 2014, which will take place April 2 to April 4 at the Moscone Center in San Francisco. Save the date and mark your calendar for registration, which opens at 9 a.m. PT on Jan. 14 at www.buildwindows.com.

As always, Build is a time to bring developers together to talk about our latest products, platform advances, tools and offerings, all of which come together to create unmatched apps and scenarios. With Windows, developers can create new experiences to reach hundreds of millions of devices on peoples’ desks, in their homes, in their pockets and in their living rooms. At this year’s event, we’ll talk about what’s next for Windows, Windows Phone, Windows Azure, Windows Server, Visual Studio and much more.

So pay a visit to www.buildwindows.com, plan to register on Jan. 14, and join us for three days of immersive presentations delivered by the engineers behind our devices and services. Be among the first to see what’s next from Microsoft. We’ll look forward to seeing you at Moscone!

Microsoft to developers: Welcome to Build!

Save the Date to Register for Microsoft’s next developer Conference

Microsoft’s sold-out developer conference, Build 2013, brought developers and journalists from all over the world to catch the event live in San Francisco.

Developers dove into 3D printing at the Build 2013 Hackathon

Build 2013: Keynotes and Sessions and Coding, oh my!

Attendees onsite at Build 2013 interacted with over 200 Microsoft engineers behind the products and services. But millions of viewers online caught the keynotes and sessions live on Channel 9 or later on demand.