Plugging Directly into the Internet Backbone at Tech Ed

I am attending the Microsoft Tech Ed event for IT this week in Atlanta, Georgia. The event is being attended by over 10,000 IT Pro’s and software developers. I am here as the chaperone for eight exemplary student technologists including member of two top US Imagine Cup teams; Team Bear Paw from Brigham Young University in Provo, Utah, and Team Note Taker from Arizona State University in Tempe and four Student Insider bloggers: Angela Fox from University of North Texas, Tom Ziegmann from Arizona State University, Steven Nowak from Wheeling Jesuit University and Billy O’Neal from Case Western Reserve University. 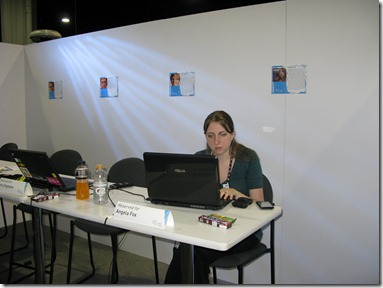 The Imagine Cup student have a booth in the expo right next to the blogger corner, where our four student bloggers have dedicated stations. One of the unexpected characteristics of our location is that the hardwired Internet connections appear to be very close to the Internet backbone. The reason I say that is that John Alexander from geekswithblogs.net, who is facilitating the blogger zone here says he just ordered wired Internet, and isn’t paying anything special for the 400MB / sec plus upload/download speeds were seeing!

This kind of once-in-a-lifetime connection speed begs testing. So I tried downloading Expression 4 suite (which I needed on my rebuilt machine) from MSDNAA, and we saw 7.8MB/second download speeds! The 500MB ISO downloaded in under 90 seconds including error checking! (by the way, when you get slow download speeds from MSDN or MSDNAA, its NOT them… it’s you).