In one of the sessions that we did at Ignite around Windows 10 Subscription Activation, we included this slide that talked about the progression that has been made through the years in simplifying the process of changing the installed SKU of Windows, primarily between Windows Pro and Windows Enterprise: 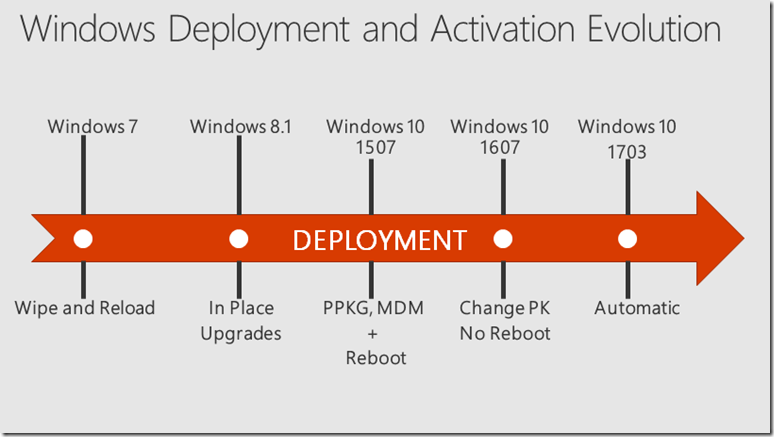 Judging from the reaction to my other blog that talked about the one new path that we added with Windows 10 1709 to easily change between Windows 10 Enterprise and Education SKUs, it appears that there are lots of people that aren’t familiar the options that are available, or even how those options changed over the years.

To remedy that, let’s give you a history lesson, similar to what’s in the Ignite session recording:

Enough history lesson then.  Let’s switch to “how-to” and focus on the most common scenarios today.

All you need to do to change all of your Windows 10 Pro machines to Windows 10 Enterprise is to run this command on each machine:

In case you are wondering, that key came from https://technet.microsoft.com/en-us/library/jj612867(v=ws.11).aspx.  It causes the OS to change to Windows 10 Enterprise and then seek out the KMS server to reactivate.  (And yes, if you really want to, you can inject the Windows 10 Pro key from that page to step back down from Enterprise to Pro.)

Scenario #2:  Using Azure AD-joined devices or Active Directory-joined devices, with Azure AD synchronization set up (“hybrid join,” as discussed in the video above), and you are using Windows 10 1709 or above.

All you need to do is to follow the steps in https://docs.microsoft.com/en-us/windows/deployment/windows-10-enterprise-subscription-activation to acquire a $0 SKU to get a new Windows 10 Enterprise E3 or E5 license in Azure AD, then assign that license to all of your Azure AD users (which can be AD-synced accounts).  Then the device will automatically change from Windows 10 Pro to Windows 10 Enterprise when that user signs in.

If you’re running Windows 7, it can be a lot more work.  While a wipe-and-load approach works fine, it would be easier to upgrade from Windows 7 Pro directly to Windows 10 Enterprise (yes, that’s a supported path) which takes care of the move in one hop.  (That works for Windows 8.1 Pro as well.)