Last month we told you about a new idea to eliminate electrical distribution in the datacenter and improve uptime at the rack. Sounds great in principal but can you get it to actually work? I am happy to announce the successful demonstration of the concept at the National Fuel Cell Research Center at UC Irvine. We successfully demonstrated a rack of servers powered directly off the direct current (DC) output of the fuel cell stack, essentially stripping out most of the infrastructure found in the traditional data center energy supply chain. The result is a very efficient system with a radically simplified supply chain and fewer points of potential failure. 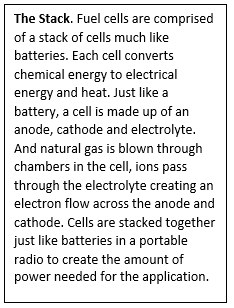 The main thing that makes this project a success is the fact that we are powering servers directly off the fuel cell stack, bypassing the power conditioning electronics. Conventional fuel cell systems use complex power electronics to compensate for fluctuations in stack voltage as load is applied and removed. Dramatic fluctuations in load cause catastrophic failure in the fuel cell stack. In conventional fuel cell systems, DC-to-DC converters regulate the variable stack voltage and create a consistent DC voltage output. Next, an inverter circuit converts the direct current to an alternating current (AC) to power because most appliances run on AC. This AC also needs to be transformed to higher voltages in order to transport far distances from fuel cell to the load. The problem with this system is that it not only creates potential points of failure, but each conversion and transformation step eats up energy.

Since servers a) run internally on DC voltage anyway, and b) already have sophisticated voltage regulating circuits internally, we saw an opportunity. Using an off-the-shelf fuel cell system, we cutout the power regulation circuits and bypassed the AC-DC rectifier circuits in the server and powered each server directly off the fuel cell stack. Then we subjected the system to transients; powering up and down servers, etc. Nothing broke. Not only that, the electrical efficiency, from fuel cell stack to server, improved by a full third from 39.8% to 53.3%! This is improving an already very efficient system by eliminating parasitic loads and eliminating many points of failure and cost.

What would this improvement look like on the national grid?   Factoring all the losses from an average US power plant, all the losses in transportation, distribution, transformation, etc., and all the losses within the data center distribution powering servers directly from fuel cell stacks, we expect to effectively double the efficiency, from fuel to load, while cutting out many points of failure. 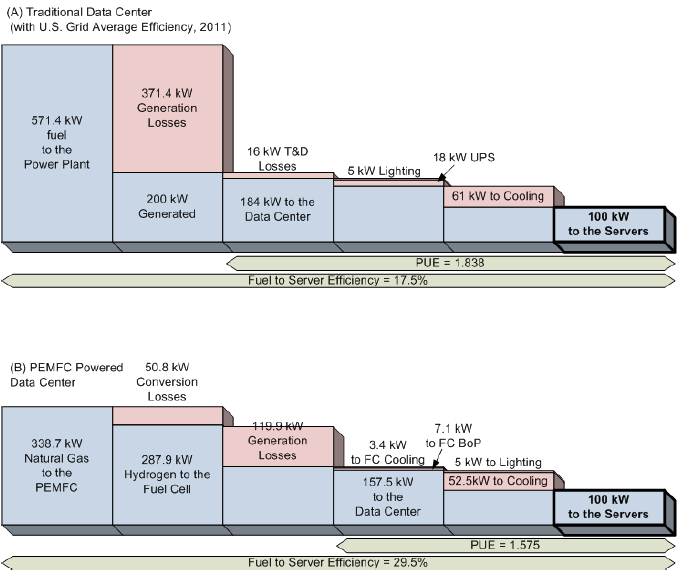 But aren't large, centralized power plants more efficient than smaller power plants?   Generally, that is true. A state-of-the-art combined cycle natural gas plant can achieve electrical efficiencies as high as 60% by capturing the waste heat to generate more electricity. However, combustion engine technology is still limited in efficiency by fundamental thermodynamics. Fuel cell efficiency, on the other hand, is based on chemical energy, not heat energy. This means we can achieve efficiencies greater than that of the state of art large power plants but in a very small space. In other words, while turbines use the difference in heat to make power, fuel cells use the difference in chemicals to make power.

So why not just use batteries?  After all it's the same principal, electricity derived from chemical potential.A battery's fuel and energy conversion system are locked together in a closed system. When the battery fuel, or electrolyte, (lead acid, lithium ion etc.) is depleted, you need to reverse the electrical flow and refresh the liquid. This is what we know as charging the battery.

When the battery acid is depleted, why can't you simply replace the acid rather than charging the battery? Oh and let's use a readily available electrolyte such as natural gas!What you have just described is a fuel cell. A battery but with electrical conversion system disaggregated from the fuel.

Focusing solely on LCOE as a metric fails to recognize the potential for radically lower costs through completely rethinking where electricity is generated and how it is distributed across the system. By designing a system that is nearly twice as efficient (uses half the energy) as the traditional model for delivering electricity to a server, we can obviously pay more for electricity coming out of the fuel cell and still have a lower total cost. And that is just the energy cost savings. Once we add in the cost savings from the avoided infrastructure (the outlets, meters, power lines, power plants), we have a design that is more elegant, requires less energy and has the potential to be significantly less expensive than traditional datacenter designs.

The final point I want to make is the potential this concept holds for the energy world outside of datacenters. After all if we can make a low cost, superefficient, mini power plant work in a server rack, there is no reason it cannot be used in the home. Imagine a small box roughly the size of a beer cooler in the garage providing heat to your home and electricity to your home and back to the grid. Utilizing the waste heat would increase the fuel cell overall energy efficiency to over 80%. Now imagine the impact an entire city fitted with small power plants in not only efficiency but in conjunction with other renewable generation sources such as wind and solar. When the grid losses capacity, say when the wind dies or a cloud blocks a solar array, each fuel cell could be instantly and remotely turned up to supply more power on to the grid and make up for the sudden deficit.

We believe the advancement being made in fuel cell lab will someday change the game in terms of how energy is delivered and managed.

You can read more about fuel cell-powered computing on our Microsoft Data Centers Blog or over on the Microsoft Green Blog. 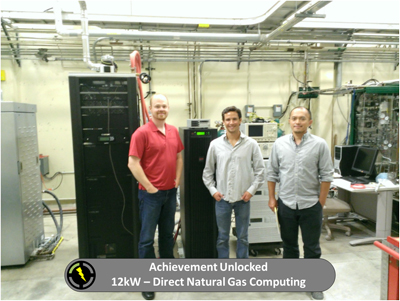