It's Time To Spring Forward An Hour in the US and Canada: Daylight Saving Time Arrives Sunday 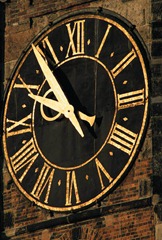 I was reminded today that daylight saving time (aka DST) is here once again, and that you'll change your clocks this Sunday, March 11, 2012. Much of the United States and Canada will "Spring Forward" on Sunday at 2:00AM, as noted in more than 36,900 news articles today. (That's up about 31,000 articles and links over this time last year.)

If you're going to SXSW this week, please keep this change in mind. IIRC, a few devices didn't update correctly last year.

This year, DST in much of the US and Canada begins on March 11, several weeks earlier than in years prior to 2007. In 2007, most of the US and Canada "sprang forward" a few weeks earlier than in past years in accordance with the US Department of Energy's Energy Policy Act of 2005 that was passed into law. DST will end later than it did prior to 2007, on the first Sunday of November (that would be Sunday, Nov. 4, in 2012); more details on the new DST start and end times can be found here). This results in a new DST period that is approximately three to four weeks longer than in previous years.

Of course, there are a few exceptions to the DST rules. As noted, Hawaii and most parts of of Arizona don't use DST. Hawaii not on DST I understand – it's off the grid and who wants to worry about changing their watches on vacation? (Seriously, it does mess with small details like television programming and flight schedules from the mainland.) But Arizona? Something to do with the weather, as Chris Kline covered for the ABC affiliate in his article "Weird? Why Arizona doesn't observe Daylight Saving Time…

"The history of daylight saving is tied to energy conservation. Switching to DST in the summer means more sunlight at night, which in turn means homes don't have to turn on lights as early. According to the U.S. Government , that leads to energy and fuel savings."

And Indiana. Ah, yes… Indiana. You'll find everything you need to know about this in articles like this one for Indiana. Salon notes in their article Please end Daylight Saving Time…

"In fact, farmers generally oppose daylight saving time. In Indiana, where part of the state observes DST and part does not, farmers have opposed a move to DST."

There are exceptions, such as the Navajo Indian Reservation in Arizona, which does observe daylight saving time. And according to entries on Wikipedia, there are a few exceptions in Canada not using DST, including a few areas (parts of British Columbia, Nunavut, Ontario and Quebec) and almost all of Saskatchewan.

So what should you do to make sure that your computers are ready for the change? If you use Microsoft Update on your PC at home, chances are you're already covered. The December Cumulative Daylight Saving Time and Time Zone Update for Windows should already be installed on your PC. If you're not sure, visit Microsoft Windows Update to check your PC and install important updates. At work, if an IT Pro (aka 'hero') manages your network, chances are good that the needed updates have already been installed on your computers and devices automagically.

In support of the changes to DST and time zones around the world, the December 2011 cumulative update is live on Windows Update (deployed December 13, 2011) and available at https://support.microsoft.com/kb/2633952.

Recently, I received a question similar to one I answered previously on daylight saving time and time zone updates to Windows:

"We updated our systems earlier this year for daylight saving time [the rules for the US and Canada]. Is there anything we need to do? Should we also update our systems with the last DST update?"

Generally, the answer is yes. As I noted earlier here, it depends.

If you manage servers and a host of Microsoft software, visit https://www.microsoft.com/time for more details. And visit the support web sites of any other software companies to see if you need to apply any updates - it's not just Microsoft software that may require updates. Keep in mind that it's not just the US and Canada that made changes to DST and time zones: we have an upcoming change in Australia and others noted on the DST and Time Zone Hot Topics page.

And remember: time is a precious thing. Never waste it.

Of interest, these top news articles for daylight saving time...