The post Math Accents discusses how accent usage in math zones differs from that in ordinary text, notably in the occurrence of multicharacter bases. Even with single character bases, the accents may vary in width while in ordinary text the accent widths are the same for all letters. The present post continues the discussion by describing the large number of accents available for math in Unicode and in Microsoft Office math zones and how they are represented in MathML, RTF, OMML, LaTeX, and UnicodeMath.

As noted in Section 3.10 Accent Operators of the UnicodeMath specification, the most common math accents are (along with their TeX names) 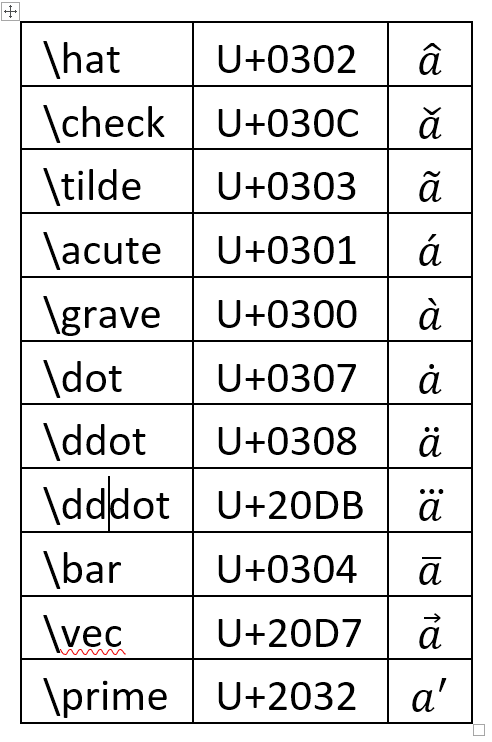 These and more accents are described in Section 2.6 Accented Characters and 3.2.7 Combining Marks in Unicode Technical Report #25, Unicode Support For Mathematics. More generally, the Unicode ranges U+0300..U+036F and U+20D0..U+20EF have these and other accents that can be used for math. 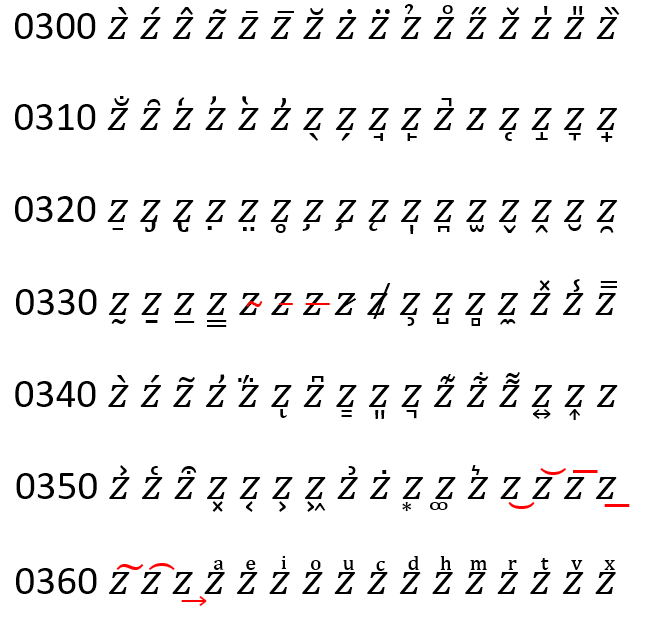 In UnicodeMath, this is given by (a+b)~, where ~ can be entered using the TeX control word \tilde. This is simpler than TeX, which uses \widetilde{a+b} for automatically sized tildes rather than \tilde{a+b}.

The combining mark in the range 20D0..20EF that work as accent objects in Office math zones are

MathML 1 was released as a W3C recommendation in April 1998 as the first XML language to be recommended by the W3C. At that time, Unicode was just starting to take hold as Microsoft Word 97 and Excel 97 had switched to Unicode. [La]TeX was developed before Unicode 1.0, so it relied on control words. Accordingly, it was common practice in 1998 to use control words or common spacing accents to represent accents instead of the Unicode combining marks even though many accents didn’t have a unified standardized representation. Unicode standardized virtually all math accents by using combining marks. One problem with using the combining marks in file formats is that they, well, combine! So, it may be difficult to see them as separate entities unless you insert a no-break space (U+00A0) or space (U+0020) in front of them. UnicodeMath allows a no-break space to appear between the base and accent since UnicodeMath is used as an input format as well as in files. Only programmers need to look at most file formats (HTML, MathML, OMML, RTF), so a reliable standard is more important for file formats than user-friendly presentation.

MathML 3’s operator dictionary defines most horizontal arrows with the “accent” property. In addition, it defines the following accents

Presumably the operator dictionary should be extended to include more math combining marks and their equivalents, if they exist, with the spacing diacritics in the range U+02C6..U+02DD.

Here’s the MathML for the math object 𝑎̂.

“Office MathML” OMML is the XML used in Microsoft Office file formats to represent most math. It’s an XML version of the in-memory math object model which differs from MathML. The math accent object 𝑎̂ has the following OMML

But none of these is as simple as the UnicodeMath 𝑎 ̂ ☺.