Editor's note: The following post was written by Visual Studio and Development Technologies MVP Peter Groenewegen  *as part of our Technical Tuesday series. James Chambers of the Technical Committee served as the Technical Reviewer of this piece. *

The characteristics of Infrastructure as Code are:

In this article, I will explain how to leverage a deployment pipeline and create Azure infrastructure with versioned Azure Resource Manager templates (ARM templates). For the deployments in this article, the VSTS Build and Release pipelines will be used. The code or ARM templates will be managed from a Git repository. Code in the Git repository can use similar practices as any other development project. By updating your code or templates, you can deploy, upgrade or remove your infrastructure at any time. The Azure portal will no longer be used to deploy your infrastructure because all ARM templates are deployed by deployments pipelines. This will give you full traceability and control over what is deployed into your Azure environment.

If you have a large number of infrastructure resources, it is good to know what the exact footprint is. If you know this, you can easily redeploy and create test environments without the constant question: to what extent is this infrastructure the same as production? In order to obtain adequate control over your infrastructure, you can apply versioning to the deployments and their content. In this case, ARM templates in combination with VSTS can help you. When applying Infrastructure as Code this way, you can test an actual infrastructure deployment and develop new templates at the same time. To do this you need two deployment pipelines:

The templates used in the second pipeline are deployed in the first pipeline. These are called linked ARM templates. A linked ARM template allows you to decompose the code that deploys your resources. The decomposed templates provide you with the benefit of testing, reusing and readability. You can link to a single linked template or to a composed one that deploys many resources like a VM, or a complete set of PAAS resources.

The goal of this pipeline is to deploy a set of tested linked templates (a version) to a storage account from where they can be used. Each time you perform an update to the templates (pull request), a deployment pipeline is triggered (continuous integration), and once all tests are successful, a new version is deployed and ready to use. The new deployments exist side by side with the earlier deployment. In this way the actual resource deployments can use a specific version. The following figure provides an overview of the pipeline:

The deployment starts with a pull request to the master branch of the Git repository. Then a new build is triggered. In this build pipeline, the sources are copied to a build artifact to be used in a release. In addition, a build number is generated that can be used as version number of the released templates. 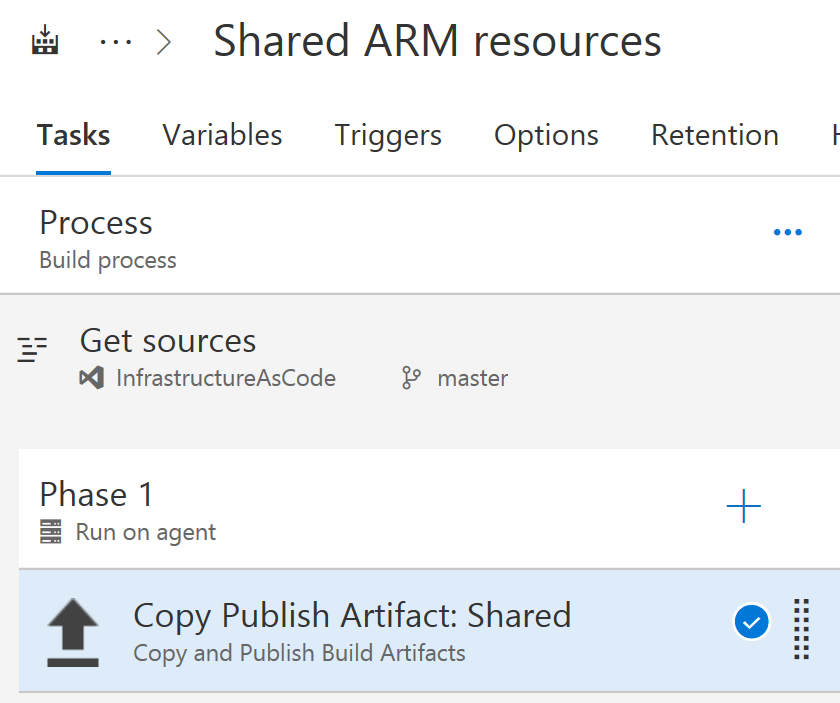 The release has several release steps to ensure that the ARM templates are tested before they are published. Templates are tested by deploying the resources. In the sample, all steps are an automatic process. When the tests succeed, the release continues with the deployment of the templates to the storage account where they can be used for the real infrastructure deployments. 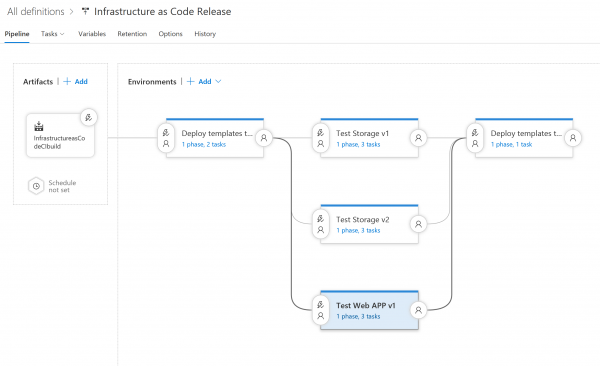 The first step is to deploy to a test location on the storage account. This test location will be used to test the ARM templates by doing test deployments. When you deploy the templates, this can also help you in debugging errors by running a test deployment from your local machine where you can point to the test storage container to run the templates from there. The only task in the environment is to do an Azure Blob File Copy. All the linked templates (the artifacts) are deployed to the Azure storage account (configure the storage account in the Azure Portal when you setup your deployment pipeline). 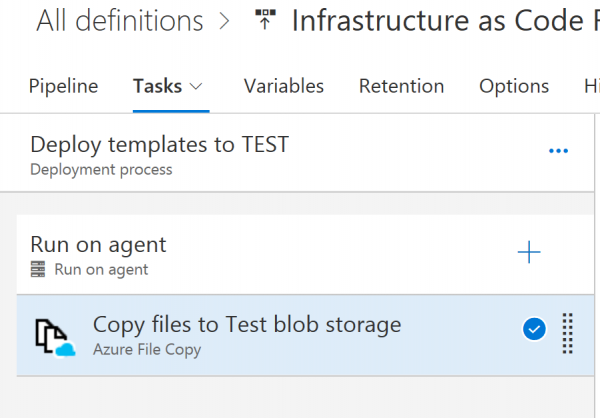 You can perform these regression tests to verify the changes to your templates do not break the common usages. Add for each configuration combination that you want to test a separate step. When you perform this step, you can run them in parallel to grain time. If you split the steps into multiple release definitions step, it is also clear where you have a problem if a specific step fails and find the issue. 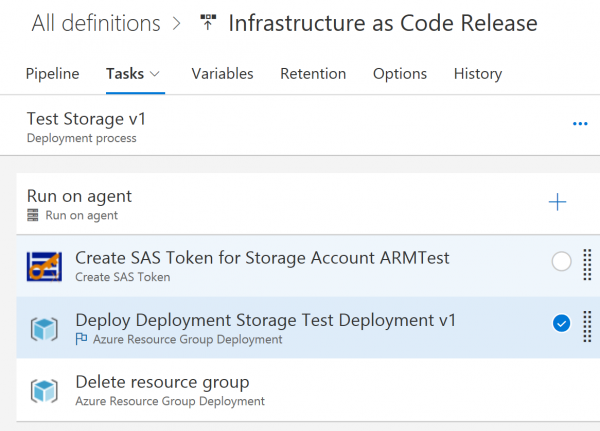 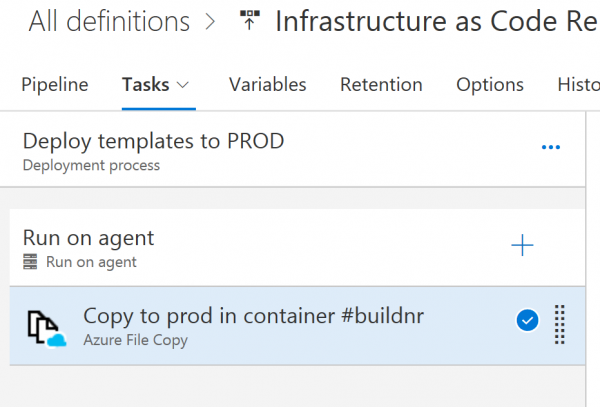 Pipeline for deploying the resource base on the reusable ARM templates

When all linked templates are deployed, they can be used to perform the deployments of your Azure infrastructure. In the sample pipelines, I have only one test environment, but the number of test environments can be different for each pipeline. One pipeline will deploy the resources of one Azure Resource group.

The goal of the build is to produce an artifact of the templates that can be used in the release pipeline. The deployment starts with a pull request to the master branch of the Git repository, which is a trigger for the orchestration to start a new build. In this build pipeline, the sources are copied to a build artifact to be used in a release.

The release pipeline will validate, do a test deployment and then deploy the resource to the production environment. The templates in each environment are the same; the only difference is the parameter files. The parameter file can parameterize the sizes of the resources deployed in the different environments. The sizes must be chosen wisely in order to represent the production environment, but keep in mind the costs of running a test environment. In the main template, you keep a variable build, which you use to point to a specific release from the previous pipeline. In this way you can control the deployed version of your shared linked templates.

The first step consists of validating the templates for all environments. This is done by running a deployment in Validation Mode.  You can select this option under Deployment mode in the ARM Deployment task. Here, the template is compiled, it is checked to see whether it is syntactically correct and will be accepted by Azure Resource Manager. You have to do this for all environments to check whether the parameter files are correct. When the step succeeds, the deployment to test will start. 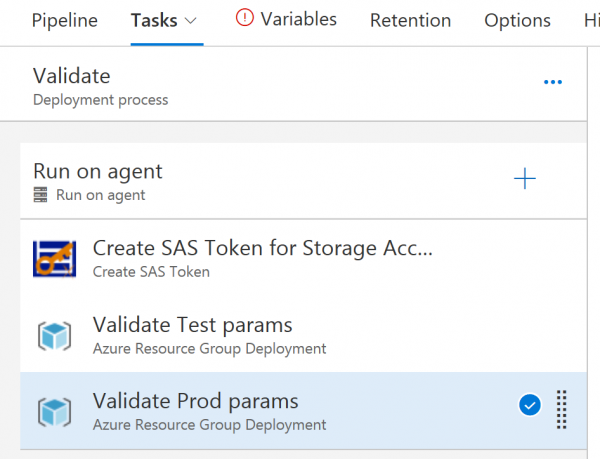 The goal of this step is to deploy and test the deployment of the resources. If there is a need for a gatekeeper, approvals can be added at the beginning or end of this step. If not, the deployment of your test environment starts automatically. If possible, use the Deployment Mode option “Complete”. This ensures that the resources in the Azure Resource Group are the same as those defined in the ARM template. The action consists of 2 tasks. First create a SAS token for access to the Azure Storage. The next step performs the actual deployment. If everything succeeds, you can optionally do some manual testing on the resource itself, do infrastructure testing with Pester or create some test scripts. 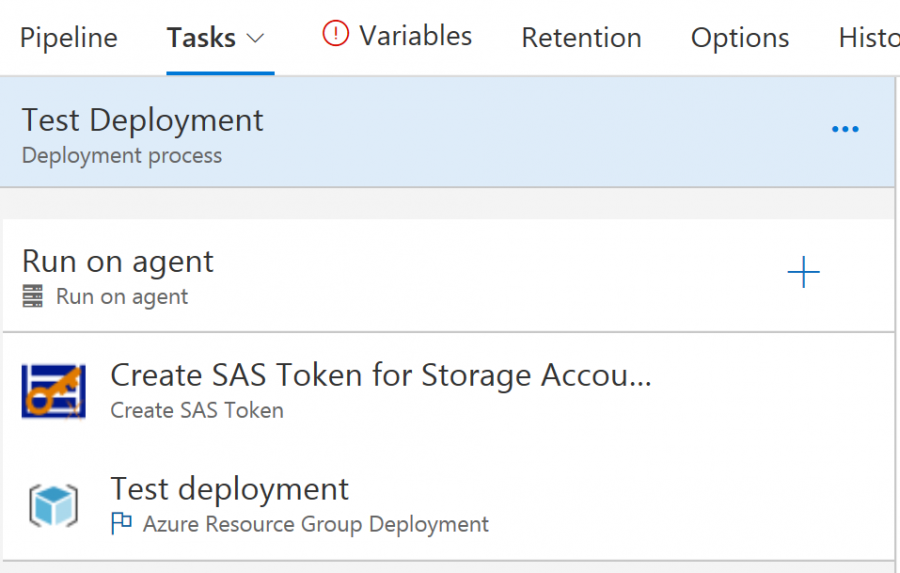 The production release starts with a gatekeeper (approval). When you are satisfied with the previous (test) resources, an approver can start the production deployment. All resources in the production resource group will be updated according to the ARM template. Try to run your deployment in Complete mode, because then you know that all resources in the resource group are the same as you defined in your Git repository. You are running an infrastructure as Code scenario. 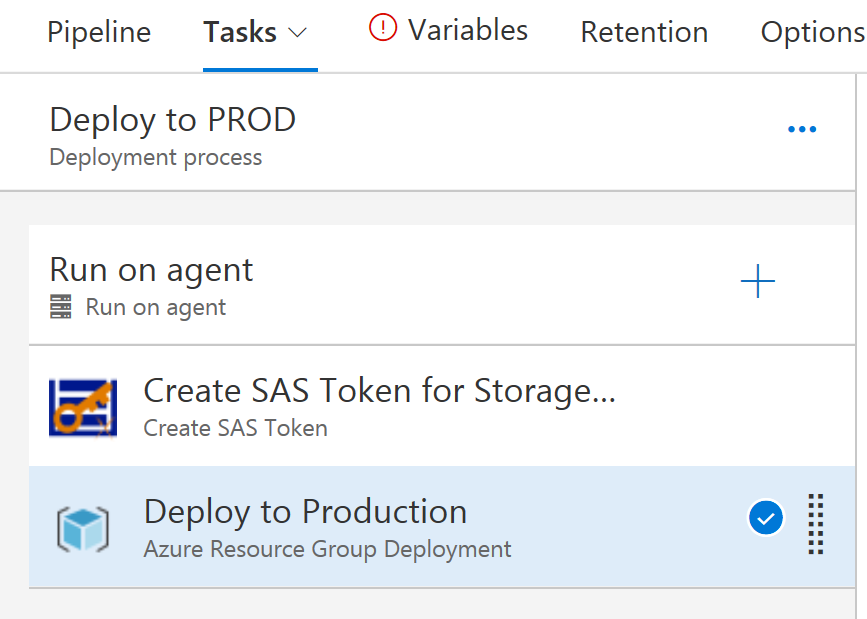 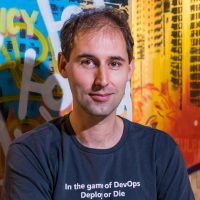 Peter Groenewegen has been programming computers since he was six. Currently, he focusses on implementing cloud strategies on Microsoft Azure, Software Architecture, DevOps and Application Lifecycle Management. He works as an Azure Cloud Consultant at Xpirit, where he helps clients hands-on with their Cloud implementations. Peter is active on Stackoverflow, writes blogs and speaks at conferences. Follow him on Twitter @pgroene