Microsoft Dynamics NAV has always had its own report designer. In NAV 2009 it still does, but in addition to this you can also use the Visual Studio (VS) report designer.

NAV 2009 – both the classic and the new client – will still run reports designed in NAV’s report designer. So in way nothing has changed. You can still use the existing report designer. VS report designer offers a lot of new options and features. The idea of this post is to describe what features out of 100s that you actually need. When it comes to a simple report, only a very few features are needed to get started. This post tells you which ones they are.

This deletes the report layout

This opens VS report designer and is where you will go to design your report for the RTC.

Going to View -> Layout opens VS Report Designer which looks like this:

The parts of this environment you need, are:

Normally you can switch between the Toolbox and “Website Data Source” (fields) as shown in the red circle in the picture above. But if for some reason the toolbox is not visible, then go to View -> Toolbox. If you use the “Create Layout Suggestion”, then this will add the necessary elements to the report, and you won’t need the toolbox. If you create a layout from scratch, then all you need from the toolbox – at least for simple reports , is a table: 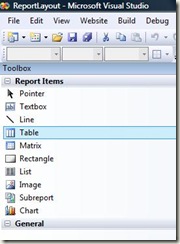 This is where you select the fields to print on the report. It will automatically show you anything that you have added to sections in the classic report designer. So to add / remove fields from here, go to sections and add / remove them from there.
To add the fields from the WebsiteData Source, just drag and drop them into a table or to where you want them displayed.

VS report designer has 100s more options, features and elements, but the ones mentioned here are the only ones you need to get started.

So having explained which features you need - at least to create a simple report - this is how to use them:

Finally, to run the report, either run it directly from Start -> Run, like this to run report 99800:
dynamicsnav:////runreport?report=99800
or of course you can add the report to a page to run it from the new client.

These postings are provided "AS IS" with no warranties and confer no rights. You assume all risk for your use.