You can find all these extensions by searching the Visual Studio Gallery for Noah Richards, and the source for each is available on my github page.

This extension adds a command, "Align Assignments", that is bound to Ctrl+Alt+] by default (and placed in the Edit menu). This command helps you line up assignments by aligning the '=' on each line.

You can use this in two ways:

If you are using C#, you should make sure the following option is enabled, so that C# auto-formatting doesn't undo the alignment: 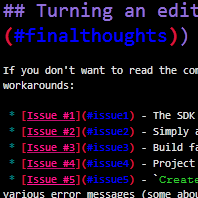 This is an extension for writing files in the Markdown syntax. It currently (version 0.1) has the following features: 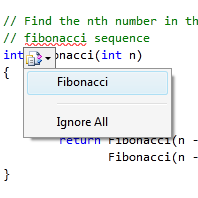 This extension, written by Roman Golovin and I, provides spell checking support for comments and string in code files and for all content in plain text files. Spelling errors show up with squiggles and use smart tags for suggested fixes (or to ignore that error). Smart tags can be activated with ctrl-. (period). 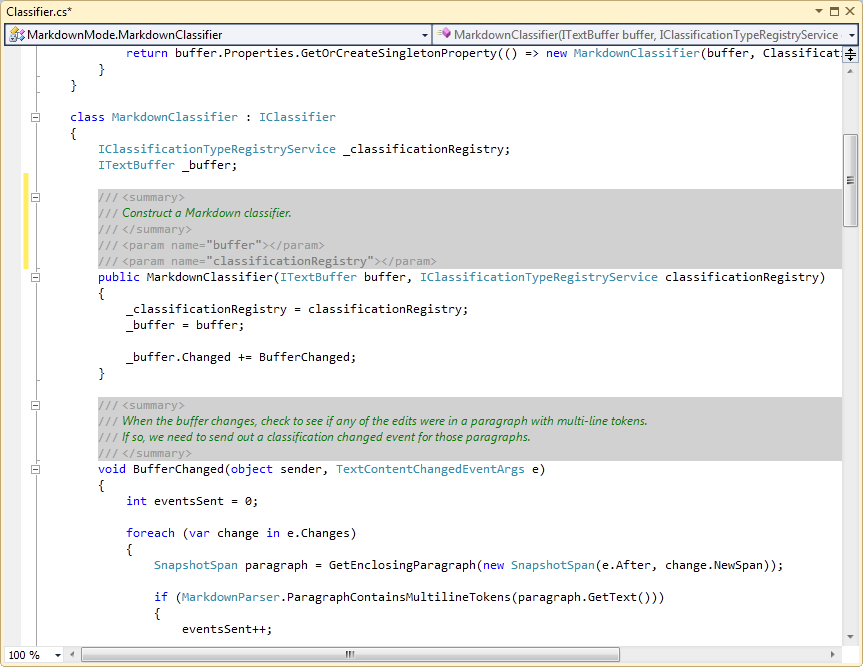 The one caveat is that the extension will occasionally hit false positives for background colors that should go to the edge of the viewport.

This extension restores the ability to set the selected text foreground color in Visual Studio 2010.

In order to change it from the default (white), change the foreground color for the "Selection Foreground" item in Tools->Options->Environment->Fonts and Colors, which appears towards the end of the list, in the portion that is sorted alphabetically.

Because of the way the extension works, changing the selection may be slightly slower than running without the extension installed. 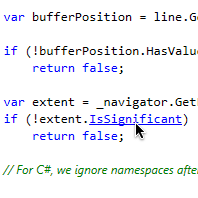 This extension introduces a behavior found in a couple of other editors (like Eclipse), where holding down the control turns identifiers in a file into hyperlinks. When you click on these hyperlinks, you are taken to the definition or declaration of an identifier or type. This is the same behavior you get from using the regular Go To Definition command (bound to F12 in Visual Studio), but this extension allows for quick and simple browsing of a codebase by looking through definitions: your left hand never leaves the control key, and your right hand never leaves the mouse. 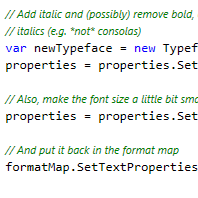 Because the Fonts and Colors dialog was not updated for Visual Studio 2010, the only way to make changes like this is through an extension, but you can use the source code to learn how to add something like this to your own extension. 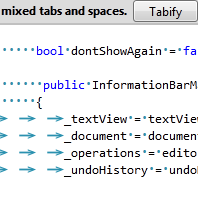 This extension is for cases where a file has a mix of tabs and spaces uses for indentation, which happens sometimes by accident or when multiple people are working together. The extension offers to help by showing a non-obtrusive margin (not a modal dialog), and gives you the option to Tabify, Untabify, never show the margin again for that file (until the file is re-opened), or just close the margin for now. The file is re-checked when it is either loaded or saved. 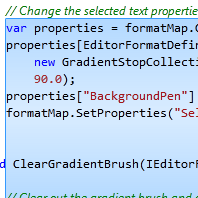